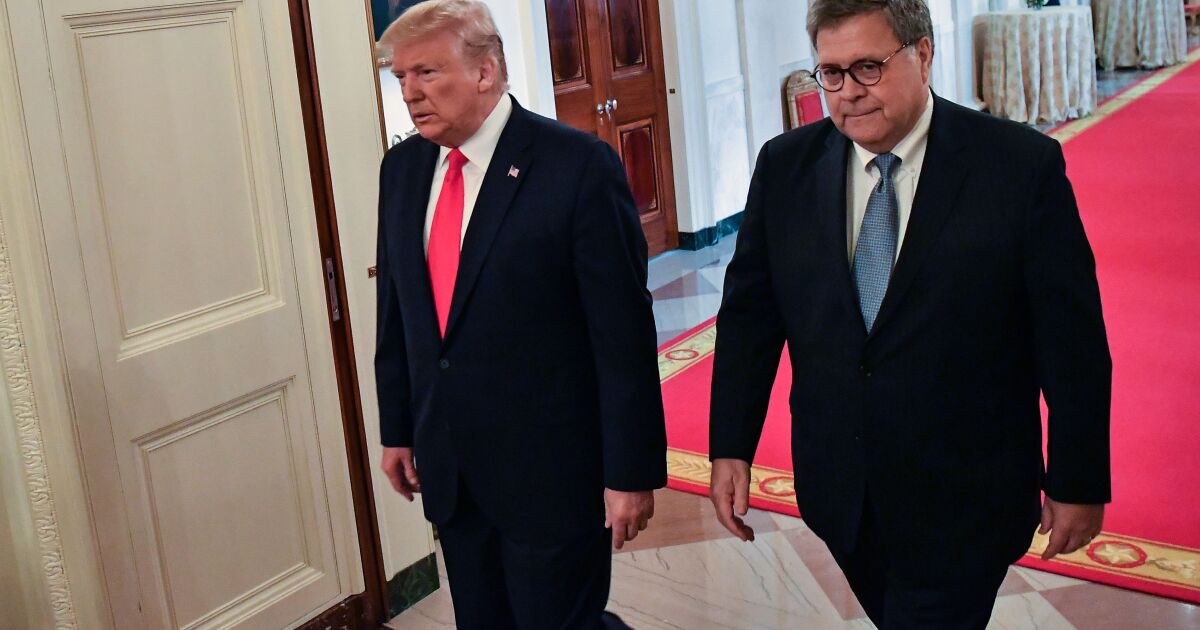 A small consolation in the upheaval created by the coronavirus is that disease is a public health issue, not a political one; it should transcend the partisanship that has so bitterly divided us. The virus, we’ve heard repeatedly, can’t tell the difference between Republicans and Democrats.

In fact, however, COVID-19 and the governmental actions to subdue it are now giving rise to bitter social strife playing out along familiar red-blue fault lines, a gulf deepened in particular by organized animosity toward government.

The president himself is the impresario of these toxic developments. His initial pooh-poohing of the virus, with the aid of far-right media, has helped promote a striking bifurcation between the cultural camps as to just how dangerous the virus is. A Washington Post/University of Maryland poll last week found that 71% of Democrats and Democratic-leaning independents say that public events won’t be safe until June; only 51% of Republicans agree, and they continue to push for the resumption of normal life.

On Friday, in what may be the most reckless demagoguery ever from a sitting president, Trump instructed his most diehard supporters to “LIBERATE” states with stay-at-home orders. It was no surprise that the demonstrations and protesters the president decided to tweet about, and cheer on, were in three states with swing potential — Virginia, Minnesota and Michigan.

Worse, the government agencies Trump has shaped in his image are in direct formation behind him, exploiting the virus to advance preexisting ideological agendas and, not incidentally, the president’s reelection.

One of Trump’s “LIBERATE” tweets specifically exhorted citizens of Virginia to “save your great 2nd Amendment. It is under siege.” The reference was to a gun law in Virginia requiring background checks, which the state’s new Democratic leadership had managed to pass early this year. The tweet was a bumper-sticker shout-out to extreme gun rights partisans all over the country.

It was also a back-pat to the NRA, which had already successfully lobbied the administration to amend its stay-at-home guidance to include gun stores within the exceptions for essential businesses. Although the change is not binding on states, the effect of the switch was to push several into amending their own essential business orders to include gun stores. Los Angeles is among the cities that held firm; the NRA sued in federal court; L.A. won.

Charging that “religious liberty” is under attack from secular society is another mantra Trump partisans are trotting out during the pandemic. Some church pastors have alleged that curtailing services under stay-at-home orders represents intentional government action against the faithful and the curtailment of their 1st Amendment rights.

“Free exercise” doesn’t exempt churches, mosques and synagogues from generally applicable laws, but it does mean that religious groups and institutions can’t be singled out by government rules. The basic pandemic orders we’ve seen ought to pass 1st Amendment muster in the courts because cities and states aren’t burdening religious institutions with harsher lockdown rules than, say, bars and restaurants. Two such cases in federal courts in Kentucky and New Mexico have so held.

In an eye-catching gesture, the Department of Justice stepped into one such case, Temple Baptist Church vs. Greenville, Miss., issuing a “statement of interest,” a supporting brief. In this instance, the statement’s effect was to strike a blow for Trump’s side of the culture wars, yet again in a state that will be important in November. (It is the only time the DOJ has seen fit to weigh in on a virus-related matter since the president declared the coronavirus outbreak a national emergency.)

The city of Greenville sought to shut down drive-in services after receiving complaints that Temple Baptist and other churches weren’t complying with social distance requirements. The church immediately filed a federal lawsuit alleging that its worshipers were staying in their cars with their windows up and that the city was discriminating against it — and trespassing on religious freedom — in enforcement measures aimed expressly at a church.

The dispute hinged primarily on facts — was Temple Baptist complying with social distancing requirements or wasn’t it? It is not normally the province of the Department of Justice to take sides in a factual dispute. But Atty. Gen. William Barr’s department parachuted in, declaring that if the church’s assertions were proven, the complaint would amount to a violation of the free exercise of religion.

Well, sure, if. The DOJ’s recitation of the law was scarcely controversial. The statement of interest, however, acted as a sort of grenade in the middle of a local lawsuit. The brief, with its avowals of support for the church rather than the city’s orders, made national news, and the mayor of Greenville (a self-described “devout Christian”) caved.

The whole thing played out primarily as a victory for red state faithful against the forces of liberal secularization. Then Barr sent another shot across the red-blue divide when he threatened to sue states that don’t relax their stay-at-home orders sufficiently in his, and his boss’s view, a warning all the more striking because it is empty. The Department of Justice lacks the tools to comply with the president’s preferred course.

There is no sensible reason for the government’s responses to COVID-19 to smack of red-blue issues and the culture wars. We’ve seen governors of both parties and scientists trying to keep politics at bay in their briefings, actions and policies. But at a time when the federal government’s most important function is to coordinate and unite, the president, his followers and enablers, and his executive branch are hell-bent on dividing. All of us are at risk in this pandemic, but when it comes to protecting Americans from COVID-19, the president can only see red.