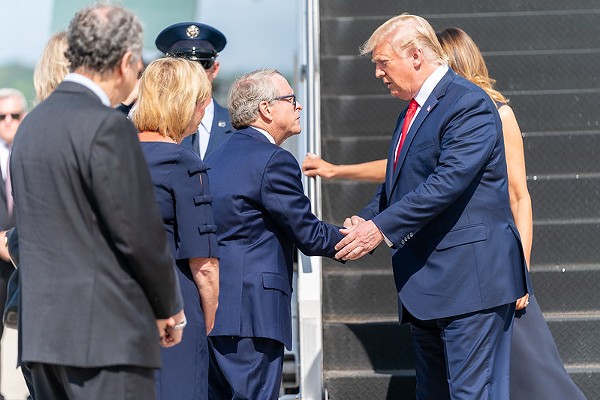 Scene: Republican dignitaries gather in a conference room at the statehouse, Columbus, Ohio. Governor Mike DeWine enters with a look of surprise.

DeWine: “Geepers, what are you guys doing here?”

Chamber of Commerce President: “Mike, a few of us were talking and… well… we’re worried about you.”

DeWine: [with quizzical look] “Geepers, whatever for?”

Chamber President: “We feel you’ve changed, Mike. Lately it seems like you’ve been – how can I say this nicely? – showing empathy for others.”

Chamber President: “No, no, it’s not that. It’s just that you’re issuing these stay-at-home orders and listening to scientists and pointy-heads instead of us. You’re starting to care about people who don’t matter. [softens voice] Look, everyone has had a brief fling with caring before…”

Jordan: “Speak for yourself.”

Chamber President: “…but most people grow out of it in college. Or after their second divorce. We’re afraid it’s driving away our base.”

Laura Ingraham: [attending by speaker phone] “So sack up, governor. Grow a pair.”

DeWine: [perplexed] “But all these deaths…”

Bank Lobbyist: [trying to be patient] “Yes, Mike, death can be unfortunate under limited circumstances. But when we talk about reopening Ohio, we’re not talking about putting ourselves at risk. We just want others to risk death to serve us. All we’re asking is to sacrifice a few thousand waitresses, maybe some movie theater workers, a couple hundred grandmas. That’s not too much to ask, is it?”

White Power Militia Leader: [with cheerful enthusiasm] “You can kill my grandma. I need the inheritance. I’m saving for a jet ski.”

NRA Official: [chuckling] “Drop her at the gun range, White Power Guy. Nothing fires up our Second Amendment boys like live target practice.” [guffaws around the room]

DeWine: “But the scientists say—”

Prominent CEO: “That’s the point, Mike. Republicans don’t listen to scientists. We denounce them as the Deep State. Look how well it worked with ‘global warming’ [makes air quotes]. We pretended it didn’t exist, and it all went away.”

Coal Lobbyist: “I’m just spit-balling here, but what if we bought you some new scientists, governor? I got a guy who can score bulk discounts from the University of Phoenix.”

Chamber President: [hiding exasperation] “The point is that it’s time to start acting Republican again, Mike. The way you caved on that mandatory mask thing, that was beautiful. But we must return to what made this party great: The abject indifference to the suffering of others.” [standing ovation]

Pork Industry Lobbyist: [as if speaking to a child] “Wouldn’t it be fun to be mean to pregnant ladies again, Mike? Maybe taunt some A-rabs or pass a law saying that if you ‘accidentally’ get your employees killed [laughter], you get a tax credit?”

Chamber President: [glaring at Jordan] “Let’s save the chanting for the afterparty, Jim. While we appreciate your thoughtful input, we can’t be sure RINO here isn’t secretly taping this for the libtard media.”

Republican In Name Only: [looking sheepish] “I like killing just as much as the next guy.”

DeWine: [contrite] “Geepers, maybe you guys are right. Maybe my approval ratings pushed me to vanity. Maybe I’ve forgotten the true meaning of Christianity. ‘For the Lord said unto thee: If I really cared about little people, I wouldn’t have dropped The Plague on that aircraft carrier, now would I?’ Ezekiel 14:36.”

Chamber President: “That’s the spirit, Mike. I believe you’re cured. Let’s repair to the bar and celebrate with a gin rickey.”

Jordan: [whining] “But you promised we’d get hookers!”

Chamber President: [impatient] “Remember, Jim, our lease on you expires next month. Do you want us to trade you in for the Rob Portman model? He’s having a Spring Blowout Sale.”

Chamber President: “Televangelist, can you lead us in a closing prayer?”

Megachurch Preacher: “Our Father who art in the gated communities of Heaven, hallowed be thy name…”

Opinion | We can’t cure mental illness, but we can get guns off the streets
Why Mass Shootings Won’t Get Tough Gun Control. : ThyBlackMan.com
ILA | Ohio: Emergency Powers Bill Heads to the Senate for Concurrence, Contact Your Senator Today!
OP-ED: Repeal the Second Amendment | Op-Ed
BOOR REVIEW: ‘American Rifle: The Case for the AR-15″