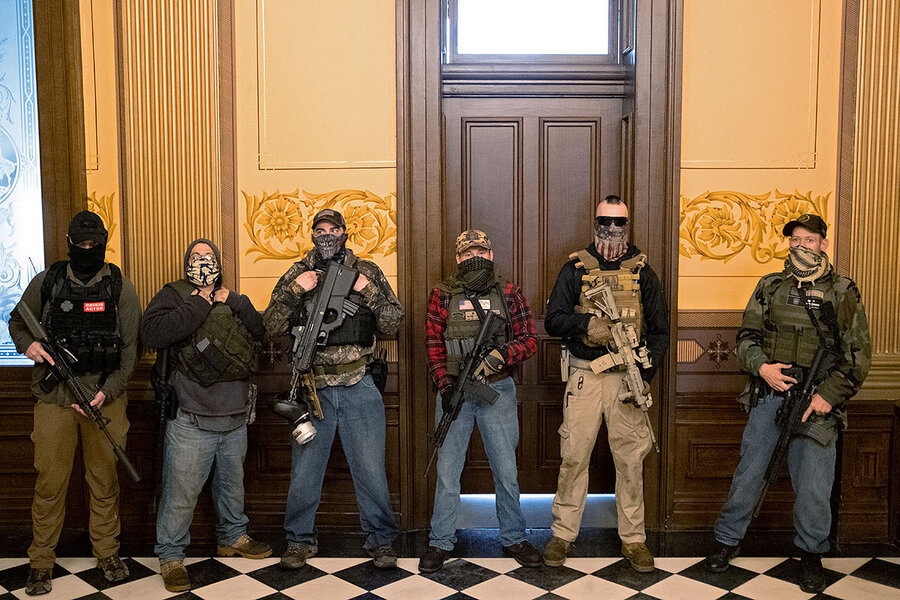 On the whole, Ashley Phibbs thought last week’s protest inside the Michigan state Capitol went well. As one of the organizers, she tells the Monitor: “I think we were heard.”

What is unclear is what Americans actually heard. For many, the indelible image was of protesters with assault rifles shouting at security – with a few Confederate flags and intimidating signs outside. Anticipating the trouble that morning, one state legislator had gone so far as to put on a bulletproof vest.

Michigan is among the few states that allow guns in the capitol rotunda. Yet in exercising that right last week, hard-line protesters created a scene that even some gun-rights advocates question. On such a tense topic, there is a need to think how things look to the other side.

“I, as a state lawmaker, want to hear your concerns and your position on the issue,” says state Sen. Sylvia Santana. “But I don’t feel that bringing assault weapons to the capitol and using symbols of hatred will make me understand your issue better.”

It was a first for Michigan state Sen. Sylvia Santana. Before heading to the statehouse in Lansing last Thursday, she slipped into a bulletproof vest.

Ms. Santana’s husband, a sheriff’s deputy, warned her about potential trouble at a rally to protest the decision to extend a coronavirus lockdown.

A group of armed white men entered the Capitol and shouted at lawmakers. To Ms. Santana, some were dressed like they were “going to war.” Several Confederate flags, a swastika, and a misogynistic sign aimed at Gov. Gretchen Whitmer could be seen outside.

“I thought that was very scary,” says Ms. Santana, an African American who represents parts of Detroit and all of neighboring Dearborn. “We’re there to do a job, and it’s not to dodge bullets as we try to do our jobs in a bipartisan fashion to make sure we’re keeping all Michiganders safe.”

Editor’s note: As a public service, all our coronavirus coverage is free. No paywall.

Four days on from the protest, her concern lingers. The pandemic has intensified many societal fault lines – from health care inequities to political polarization – and gun control is no exception. Feeling that state officials are overreaching, a tiny minority of protesters are flexing their Second Amendment rights in Michigan and beyond.

But at a time of crisis, their crusade against the perceived tyranny of government is seen by many as tyrannical in its own right – recklessly using their liberties to intimidate others.

The core question is: Where should the line be drawn? For protesters, guns in statehouses is one of the purest expressions of the power the Second Amendment invests in citizens. But no constitutional right is absolute.

“Where do people who see no problem with guns downtown or near a hospital or in the legislature, where do they draw the line?” Sanford Levinson, co-author of “Fault Lines in the Constitution.” “That’s an interesting question both politically and legally, because courts are really receptive to line drawing. I don’t think you’d find any judge who says, ‘Yeah, I welcome guns in my courtroom.’”

In that way, the struggle over whether to allow firearms in legislatures “is part of the culture war,” he adds.

Today, 21 state capitols allow guns in some form, according to a Wall Street Journal report. But only a few, including Michigan, allow citizens to openly carry under the rotunda. Many Republican-led states balk at open carry in the people’s hall for personal safety reasons, and courts have upheld bans in places like legislatures and polling places, holding that guns can chill other people’s rights.

Elements of race have long played a role. The modern gun control movement is linked to the signing of the Mulford Act in 1967, which banned open carry in California. The bill gained momentum after two dozen Black Panthers legally brought firearms to the state capitol to protest against it. The National Rifle Association backed the bill.

Incidents like the one in Michigan, however, could do more to damage gun rights that advance them. “It’s really now an open question to what extent hard-line pro-gun policies are politically advantageous,” says Mr. Levinson, also a visiting professor at Harvard Law School in Cambridge, Massachusetts.

Ms. Santana was certainly not persuaded. “I, as a state lawmaker, want to hear your concerns and your position on the issue. But I don’t feel that bringing assault weapons to the capitol and using symbols of hatred will make me understand your issue better.”

The scenes in Michigan, which has been hit hard by COVID-19, only make it harder to have already difficult conversations, others say. Part of self-defense is respecting the preferences other people have for their own security, which might mean leaving guns at home when overtones of intimidation are possible.

About a dozen protesters – several with visible firearms – marched Friday around state government buildings in Raleigh, North Carolina. A Facebook post said the event was to promote constitutional free speech and gun rights.

“When your eyes look at these pictures of groups of people … in a public building that is supposed to be a center of democratic exchange and debate, and you see a group of people carrying military weapons, that is not a vision of democracy,” says Hannah Friedman, a staff attorney at Giffords Law Center to Prevent Gun Violence in San Francisco. “That’s a vision of intimidation by a minority of people.”

Such concerns were heightened further this weekend, when employees at businesses in Stillwater, Oklahoma, faced a threat of violence with a gun while trying to force customers to wear masks, as mandated by the local government.

“I think we were heard”

But Ashley Phibbs has a different view.

Ms. Phibbs, a project manager and mother who helped organize the Michigan rally, acknowledged with regret that many in attendance didn’t abide by social distancing rules. She also confirmed the display of hate symbols. But she insisted those were agitators and not part of her group, Michigan United for Liberty, which has sprung up to oppose what members see as repressive COVID-19 restrictions.

“I know how it can seem to people who aren’t active in rallies and who are looking at it from the outside in, and I try to be very understanding of that,” says Ms. Phibbs. “But … I don’t think that anyone was there to really make anyone fearful. I didn’t see anything that would have really caused fear, aside from loud noises from the people yelling. But a lot of people are also sometimes afraid of guns in general.”

In the end, she says, “I think we were heard. I think overall [the rally] was positive.”

Other gun-rights advocates saw problems with the optics.

As he watched news from Michigan Thursday, Caleb Q. Dyer saw some familiar faces. The New Hampshire barista and former state legislator had been a keynote speaker at a Michigan Libertarian Party event last year.

But he worried that his friends in Michigan were sending “mixed messages” by failing to abide by public health rules.

In fact, he usually brings witty protest gear – such as a sign that says “arm the homeless” – to disarm fear. It’s a fine line, he says, between free speech and armed intimidation.

“People aren’t ready to have the discussion that a lot of these gun-carrying protesters want to have, which is that none of these laws are even remotely effective or just,” says Mr. Dyer. “But they’re not going to have that discussion if they cannot carry themselves in such a way that the opposition won’t think … that they’re murderous and violent.”

Editor’s note: As a public service, all our coronavirus coverage is free. No paywall.

Asian Americans are buying guns in record numbers. What’s caused this surge? | US news
Gun Violence Archive: How a tiny non-profit with no full-time employees became the foremost tracker of gun violence
‘She Doesn’t Tell Us the Truth’
Kelly Tshibaka: Alaskans want change
Our Vote is our Bullet | Letters to the Editor