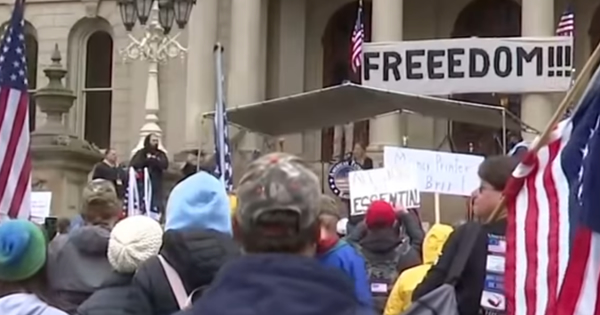 My vision of America has no room for treating any group of people as expendable. In this I am at odds with much of our history.

Expendability has not usually consisted of literally throwing people overboard, except for the “ghastly arithmetic” of slaves being brutally subtracted from a ship’s cargo at sea for lack of provisions, as portrayed in Amistad. It has more often consisted of forced or underpaid labor in hazardous or back-breaking conditions, from cotton fields to boiler rooms. People of color were told to accept their lot in life. White miners at risk of lung disease were told that at least they were better than black people.

So there is nothing new in disproportionate risk being borne during a pandemic by those deemed essential workers. In the past, we simply concealed the evidence of our non-egalitarian reality, like Jefferson landscaping Monticello so his guests would not see the slave quarters from their carriages. Even today, we are likelier to complain about having to see encampments of homeless people in our neighborhoods than to help them.

In the coronavirus pandemic, Trump’s know-nothings are not just overlooking unpleasantness but aggressively denying it, endangering not only people but our democracy.

When small but vocal groups of heavily armed nativists storm into statehouses, it is about more than impatience over restrictions imposed to protect the public health. It is people exploiting a crisis to threaten violent insurrection in rage over the loss of unmerited supremacy. Gretchen Whitmer is the duly elected governor of Michigan, most of whose citizens agree with the measures she has taken. The protesters with their sense of white entitlement do not care.

What do you think would happen if armed black protesters occupied a state capitol? Such a protest occurred in Sacramento in May 1967. As History.com notes, “The NRA Supported Gun Control When the Black Panthers Had the Weapons.” Nor did NRA defend licensed black gun owner Philando Castile when he was unnecessarily shot by a Minnesota police officer in 2016.

When principles are adjusted so readily, look for other motives. Senate Majority Leader Mitch McConnell recently attacked what he called “blue state bailouts.” In fact, his own red state of Kentucky is subsidized by blue states like New York, California, and Massachusetts, not the other way around. Setting aside the question of why wealthier liberal states should keep propping up states that continually attack their reproductive choice and LGBTQ-affirming policies, who is more of a parasite than Mitch McConnell?

The Grim Reaper, as McConnell dubs himself, may find he motivates not only his base, but also those of us who love America enough to defend it from pillaging by the likes of him.

Downtown Washington was like a ghost town Friday when I walked there on a banking errand. On the way home, I stopped in a small park featuring a statue of poet Henry Wadsworth Longfellow. No sooner had I sat down than a seventyish homeless man approached, wearing a face mask like mine, and sat on the next bench over. He was a veteran, and regaled me for half an hour with stories of war, intrigue, and terrible things he’d seen. He talked of a group of cruel teenagers who had urinated upon him. He lamented the decline in manners.

He also told of kindnesses he had experienced, and of helping a man who had overdosed on heroin in the same park. He appeared to be practiced at his storytelling, and it wasn’t clear where truth ended and embroidery began. Yet this scarred survivor was a better exponent of shared social values than the man in the executive mansion five blocks farther south who thought attending a military-themed school and avoiding venereal disease counted as wartime service.

My mood brightens at the thought that someone living in the streets upholds our nation’s values better than the pathological narcissist in the White House. If there is something of our republic worth preserving, it may be found in that homeless man and others we choose not to see, who continue to cherish what was taken from them. As Longfellow wrote, “The sky is filled with stars, invisible by day.”

Richard J. Rosendall is a writer and activist at rrosendall@me.com.