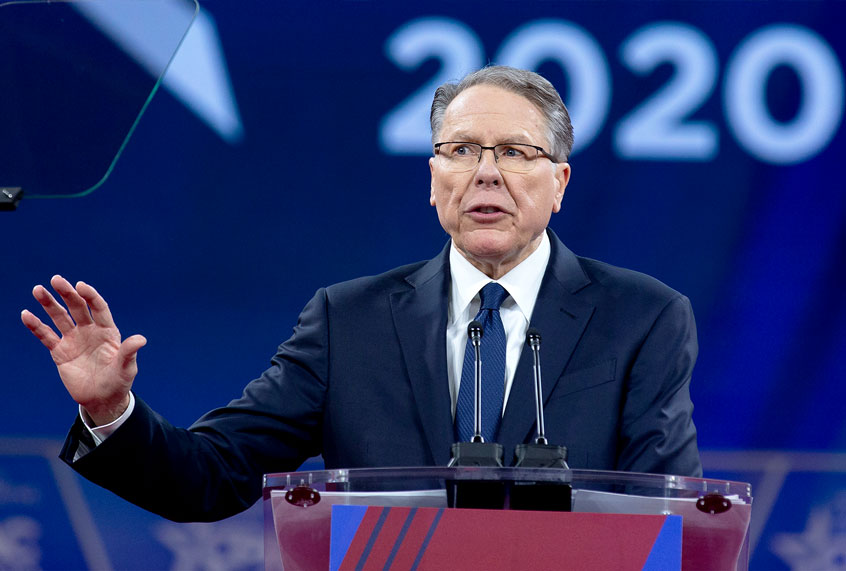 The National Rifle Association (NRA) laid off dozens of workers and slashed staff pay after the coronavirus pandemic forced the gun advocacy group to cancel its annual convention and a slew of fundraising events, according to a leaked internal memo obtained by The Associated Press.

The pandemic threatens to weaken the NRA’s influence ahead of the 2020 election after it forced the group to scrap fundraisers and membership events despite facing severe financial difficulties. The NRA has lost about $100 million as it wages a series of legal battles which have bled the group dry and exposed allegations about financial mismanagement by the group’s top executives.

The NRA has laid off or furloughed dozens of its employees, slashed salaries by 20% and imposed a four-week workweek for some of its workers, according to a memo by CEO Wayne LaPierre.

LaPierre said some senior staffers “voluntarily” took bigger pay cuts. The group did not say how much of a pay cut LaPierre would take after recently seeing his salary rise to more than $2 million.

“Defending freedom has never been easy. Over the years, we’ve weathered more tough times than most,” LaPierre said in the leaked memo. “But we will rise from this stronger and well-positioned to lead the fight to protect our Second Amendment, the First Amendment and all our constitutional freedoms during the crucial upcoming elections and for years to come.”

NRA spokesman Andrew Arulanandam told the AP that the “disruptions” caused by the coronavirus pandemic were the “primary drivers” of the cuts.

“The cancellation of the annual meeting had a significant financial impact, but beyond that, the health crisis has caused us to postpone countless fundraising and membership events along with competitions, training seminars and other revenue streams,” he said. “Like every other business and nonprofit, we are forced to make tough choices in this new economic environment.”

But while the pandemic has upended countless plans, the NRA’s problems have been exacerbated by long-running financial woes that threaten to hurt its influence in the 2020 election cycle.

“The NRA’s real problem is they had real, existing financial problems before this happened,” Robert Spitzer, the chairman of political science at the State University of New York at Cortland, told the AP. “It simply does not bode well for their impact on the upcoming election.”

The NRA, which spent a record $30 million to help President Donald Trump’s election efforts in 2016, has seen its spending decline severely in recent years as it battles its longtime public relations firm Ackerman McQueen, the creators of the now-defunct NRATV channel, and faces a slew of investigations from attorneys general in New York and Washington, as well as Congress.

“I don’t think we participate any longer in the organization’s line of credit and mortgage loan commitments,” he told shareholders at a recent meeting.

The financial difficulties have drawn criticism from other gun rights groups.

Save the Second, a group of NRA members pushing for reforms at the organization, disputed LaPierre’s claim that it was the health crisis that led to the financial troubles.

“Mr. LaPierre, if your organization was squeaky clean and ethically ran, we wouldn’t be in this mess in the first place,” the group said in an email to supporters, according to the AP.

Trump has also complained that the group is “going bankrupt,” according to The New York Times, and called for it to “get its act together quickly.”

“Donald Trump talks about the Second Amendment, but he doesn’t so much talk about the NRA anymore,” Shannon Watts, the founder of Moms Demand Action for Gun Sense in America, told Salon last week. “Some of the NRA’s own board members have distanced themselves from the NRA and major donors have begun to distance themselves from the NRA, so it’s really not surprising that Donald Trump would as well if he sees them as possibly an albatross around his neck.”

Watts pointed to the NRA’s recent losses in Virginia and in the 2018 midterms.

“If you look at the way this country has been going since the 2016 election, background checks continue to pass, red-flag laws, laws that disarm domestic abusers,” she said. “We have a 90% track record in the last five years of stopping the NRA’s agenda in state houses. So politically, they have not been as successful.”