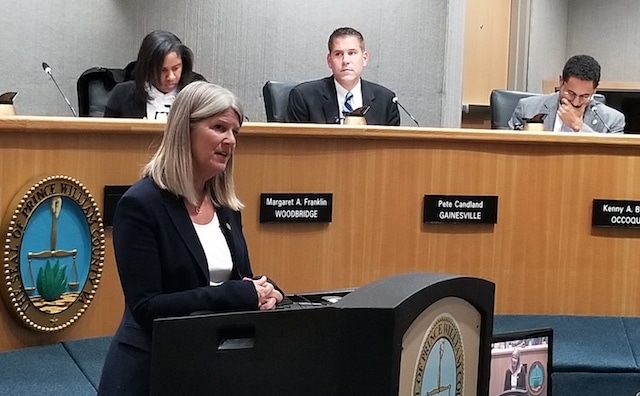 Guzman opposes the county’s 287(g) program and has vowed to have it abolished. As the jail board oversees the program, now she may have her chance.

The program checks the legal presence of those who have been arrested and charged with a crime after they are brought to the county jail in Manassas. If the inmate is found to be in the U.S. illegally, they are transferred into the custody of federal immigration and customs officials (ICE).

Guzman told the Prince William Times in 2017, when she was seeking her first term as a Richmond legislator, Prince William police stopped her while she was driving her car “at least once every two weeks because I was living in a neighborhood the police officers probably did not think I could afford,” Guzman said. “And it didn’t happen only to me. It happened to other minorities then, people from the Middle East, Muslims … anybody who didn’t look white.”

Now with more than 465,000 residents, Prince William is the second-largest jurisdiction in Virginia, and more than half of the county’s population is either African American, Hispanic, Asian or some other racial/ethnic background, which is substantially higher compared to the state of Virginia and U.S., according to the county’s economic development office.

Guzman went onto say in the 2017 interview that programs like 287(g) are unnecessary because jails in Virginia already check immigration status. However, Prince William County Sheriff Glendell Hill told Potomac Local News in an interview this week that he wouldn’t be able to check the immigration status of inmates without a working agreement with ICE.

Guzman was one of three new appointments to the jail board, made early this morning during a marathon 12-hour meeting.  Rev. Cozy Bailey, the husband of sitting Prince William County Potomac District Supervisor Andrea Bailey, and Tracy Lennox, who ran and lost in a Democratic Primary Election last year vying to replace retiring Commonwealth Attorney Paul Ebert — were also appointed to the jail board.

Lisa Johnson Firth, a Manassas immigration attorney, Richard Mattox, a congressional lobbyist for the MEDCO-Express Scripts pharmaceutical company, and Zalouteacha Jackson, who was Alexandria sheriff’s deputy in the late 1980s and now works for FEMA, will serve as alternates.

It was, as many have been in the past five months, a party-line vote. Democrats, who are now in the majority on the Board and led by At-large Chair Ann Wheeler, voted in favor of the new appointees while minority Republicans cast the dissenting votes.

The new members will fill three at-large seats on the jail board, which could resume meetings soon. Many of the county’s lower boards and commissions have been on hiatus due to the coronavirus pandemic and are now eager to get back to work, Wheeler said.

A total of nine candidates for the jail board were submitted, and their resumes are posted to the county website for all to see. Despite this, Democrats voted Tuesday to shield their deliberations from public view, opting to hold a closed-session meeting to discuss the merits of the apointees.

“These are people’s lives we’re talking about here,” said Wheeler.

It was an about-face for Wheeler who, earlier this year, held open deliberations during another controversial appointment to a commission. Harry Wiggins, the county’s former Democratic Committee Chairman, was appointed to a seat on the county’s water and sewer authority. Appointees on this board get a $9,600 annual stipend, and the chairman receives $10,200 a year — more than any other board or commission in the county.

Wiggins called former Occoquan District Supervisor Ruth Anderson — a Republican who was swept out of office by a blue wave in 2019 — an “NRA whore” following shootings at Stoneman Douglas High School in Parkland, Fla. in 2018, where 17 were killed and 17 others were wounded. Anderson never took a position on gun control during her four years on the Board but did support lowering the fee to obtain a concealed carry gun permit from $50 to $15.

Wiggins was also fined the maximum $500 by the Virginia State Board of Elections that same year for failing to register a political action committee. Under the PAC, “Republicans for Stanley Bender,” Wiggins created bright red campaign signs with the PAC’s name printed in large letters and erected them at polling places on the morning of the November General Election in 2018.

Bender had been a third-party candidate in the county’s School Board Chariman’s race. He had done little campaigning, was a no-show at debates, and with after raising only $200 for his campaign war chest, he hadn’t done any advertising.

When the election returns rolled in that night, the Republican-endorsed candidate, Alyson Satterwhite lost, and current Chairman Babur Lateef, who is backed by Democrats, won.

During the meeting on Tuesday, County Attorney Michele Robl advised the Board the private meeting was not legally required, as closed sessions are usually reserved for legal and personnel matters involving paid county employees. Jail board members are not employees, however, they do receive up to a $1,200 annual stipend, much like the water and sewer authority.

The appointments also come after the Board of County Supervisors voted to operate, once again, in emergency session due to the coronavirus pandemic. That means the Board only takes up a business that is essential to the continued operation of local government during the pandemic.

A county spokeswoman assured Potomac Local News that the jail board appointments are necessary and, in fact, are appropriate for the emergency coronavirus session as “many facets of local governing are carried out through the work of the [lower boards and commissions.]”

County residents held a rally outside the government center at 1 p.m Tuesday, an hour before the meeting began to urge county leaders to delay a vote on the appointments until more residents had a chance to speak on the issues. Many held signs that stated “Save 287(g),” and they accused county leaders of using the coronavirus crisis as an opportunity pack the jail board with members who would do just the opposite.

Since late March, no one has been able to address the Board in person. Instead, the county has relied on a call-in system named “Speak Up Prince William,” which requires residents to register in advance, and to use a Zoom-like streaming video product to pipe in live messages to elected leaders during the Board of Supervisors meetings, allowing residents to speak their minds remotely.

About 20 residents were allowed to gather in the atrium outside the closed doors of the Board Chambers during the meeting Tuesday. Many shouted to be heard, temporarily disrupting the meeting to the point where Wheeler threatened to have them removed from the building. Ultimately, they were allowed to stay, and none was allowed to enter the Board Chamber due to social distancing rules, according to a county agent standing guard at the door.

Last December, more than 1,000 people filled the atrium in protest of stricter gun legislation that was about to be taken up by the General Assembly in Richmond. Back then, they successfully argued for Prince William County to be a 2nd-amendment sanctuary county where gun rights are protected.

Constituents have also used email to make their voices heard during the pandemic. Coles District Supervisor Yesli Vega said she received more than 300 emails during Tuesday’s meeting alone, from constituents asking to delay the vote on the jail board members until such time in-person public comment is restored, and from those urging the county’s 287(g) program be upheld.

“We need some more voices in here,” he said.

His colleagues agreed and took a unanimous vote to resume in-person public comments, with properly observed social distancing measures, at the Board’s next meeting on June 2.

Politicizing
the jail board

Prior to the closed meeting, Prince William County Sheriff Glendell Hill and Jail Superintendent Col. Peter Meletis spent an hour with the Board discussing the 287(g) program. They told the elected body that the program is credited with finding the rapist of a 13-year-old girl in Prince William County.

They assured the Board that, based on their own independent investigations, if ICE deports an inmate transferred to it from the jail, it’s highly likely that a person is wanted for serious crimes in their native country, including rape and murder.

Hill has been the county sheriff for nearly 20 years, has more than 50 years of law enforcement experience in working in the region, and, by law, serves as chairman of the jail board. He cautioned the Board of Supervisors about “politicizing” the jail board over immigration issues.

“I have never seen appointments to be jail board being made for a specific reason or particular issue,” said Hill.

He called the 297(g) program, which began in Prince William County in 2007 under the George W. Bush Administration and was later renewed under President Obama in 2012, a bipartisan agreement.

Everyone on the Board thanked Sheriff Hill for his long service to the community and congratulated him on multiple national awards he’s received over the years for the management of the county jail.

Afterward, Woodbridge District Supervisor Margaret Franklin denounced 287(g), saying the program has “swept up” too many undeserving illegal immigrants, deporting them, and sending them back to countries infested with gang violence.

She recalled a time while she was working as a aide for Congresswoman Alma Adams (D-N.C., Charlotte) when she had to speak to the family of a young boy who was deported for being in the U.S. illegally. His crime — not having the proper documents.

Occoquan District Supervisor Kenny Boddye also recounted a time when he spoke to a grieving family after the breadwinner for the family committed a “minor” crime and was deported back to his native land. For him, that experience tarnished the 287(g) program, he said.

With the appointments in place, a disgusted Peter Candland, the Gainesville District Supervisor since 2010, said the Board of County Supervisor is now more interested in politics than working together collaboratively to solve problems and to serve the community.

“I’m extremely discouraged by this whole process,” said Candland. “In fact, I’ve never been more discouraged over the whole [10] years I’ve been on the Board.”

Supervisor Yesli Vega, a former police officer and the first Hispanic woman ever elected to Prince William Board of County Supervisors, echoed his statement.

Just prior to adjourning the meeting at 2 a.m., 12 hours after it began, Brentsville District Supervisor Jeanine Lawson tried to nominate Vega as an interim member of the jail board. Under Lawson’s rationale, Vega would replace County Executive Christopher Martino who will be needed temporarily sit in for retiring county police chief Barry Barnard, who is also a member of the jail board.

“We could give Christopher Martino a break. She’s clearly qualified,” said Lawson. “I don’t think we’ve ever had someone of her background on this body.”

“I don’t think that’s suitable given everything that has gone on here tonight,” Wheeler replied.

Franklin blocked the nomination by making a substitute motion to nominate Boddye to the jail board in place of Vega.

“I’m nominating him for his work in criminal justice, and he’s a member of the NAACP.” said Franklin.

In the end, both motions were withdrawn, and supervisors agreed to resume the discussion at their next meeting on June 2.