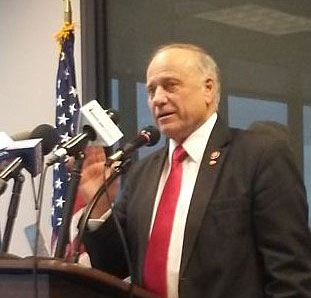 The five candidates competing in the GOP Primary in Iowa’s 4th congressional district are quarrelling about their conservative credentials and their ability to win the district in November.

Incumbent Steve King, who’s seeking a 10th term, said this weekend that he was warned soon after his narrow 2018 win that he was going to be “broadsided” by “a coup” from within the GOP

“I”m happy to have all of this scrutiny,” King said during an online forum hosted by Story County Republicans. “…I think the people that are going to the polls are going to be real pleased with the job that I have been doing.”

By mid-May, King had raised about $330,000, but had just $32,000 left in his campaign. Challenger Randy Feenstra of Hull, a state senator, raised $925,000 and had nearly four times as much money as King left for the campaign’s closing weeks.

Feenstra has been endorsed by the National Rifle Association, the U.S. Chamber of Commerce and the National Right-to-Life Committee as well as well-known Iowa Republicans like former Governor Terry Branstad and Bob Vander Plaats, president of The Family Leader.

“You need to be an effective conservative leader,” Feenstra said during Saturday’s forum. “I’ve proven it.”

Jeremy Taylor of Sioux City, a former state legislator and former county supervisor, raised about $165,000 and had $24,000 left in mid-May.

“Most of my funding comes from former Steve King supporters,” Taylor said during the Story County GOP forum, “about 80%.”

Bret Richards, the former mayor of Irwin, said he is primarily self-funding his campaign and put 73,000 miles on his van.

“Before the pandemic, I was door-knocking,” Richards said. “After the pandemic, it’s been social media — name recognition that way.”

Steve Reeder, a businessman from Arnolds Park, filed paperwork indicating a negative balance in his campaign account on May 13th. Reeder said he didn’t “chase the big money” or King’s former donors.

“I’m not beholden to any special interest groups or PACS,” Reeder said Saturday. “I’m beholden to the people of Iowa.”