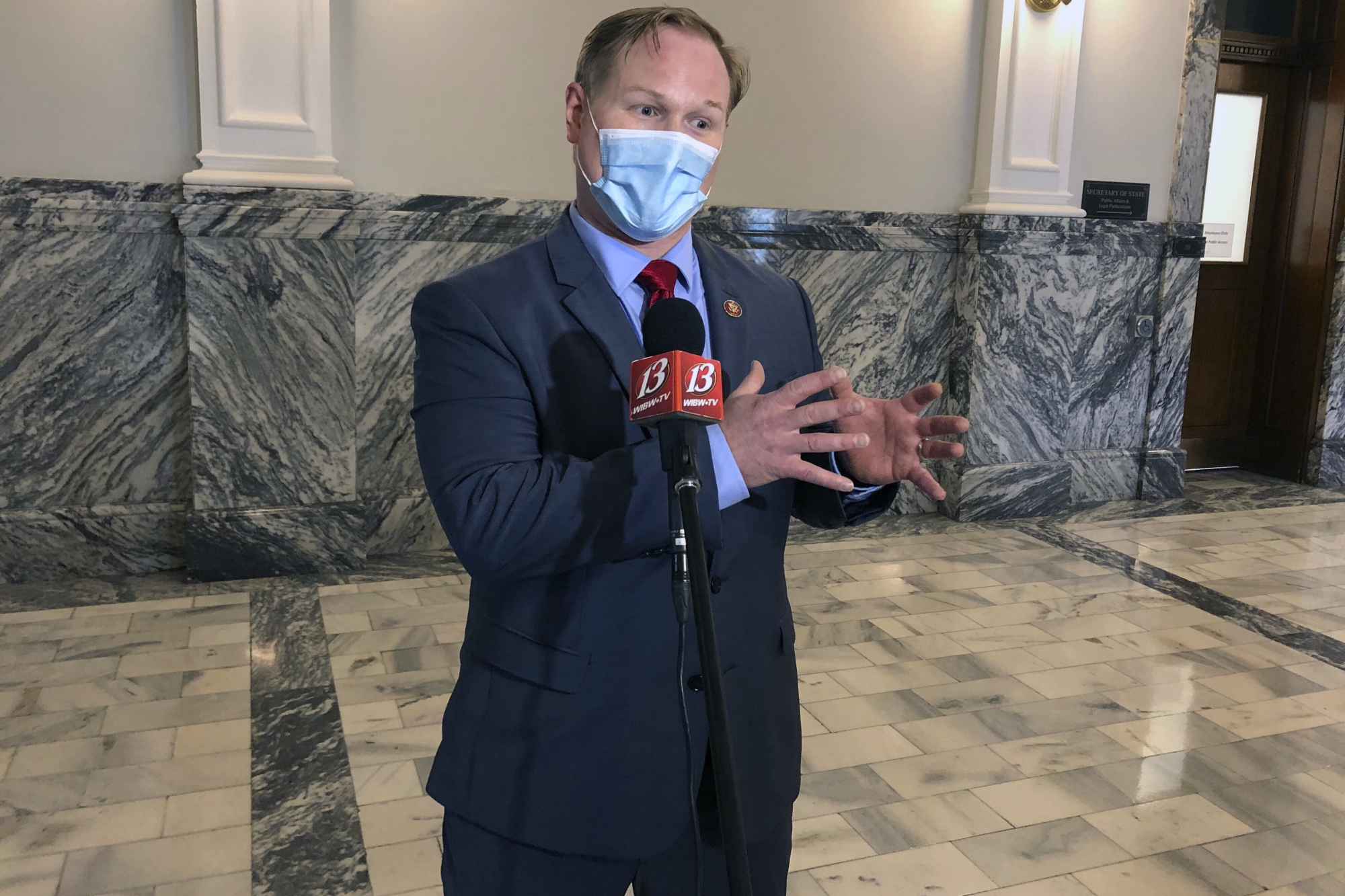 TOPEKA, Kan. (AP) — A freshman Kansas congressman who has toed the conservative line and steadfastly defended President Donald Trump nevertheless is battling accusations that he’s an impostor in a tough Republican primary race.

Rep. Steve Watkins’ voting record and statements decrying Trump’s impeachment leave little enough room to attack him from the right that the campaign of his main primary challenger, State Treasurer Jake LaTurner, is scrutinizing Watkins’ fundraising to question his loyalties.

Watkins was a political novice when he won the seat in 2018 by less than a percentage point in his GOP-leaning eastern Kansas district that Trump carried by a wide margin in 2016. His primary race this year is about whether he could self-destruct in the fall and cost Republicans what had been a safe seat. The national Democratic Party has said it sees “an opportunity” as part of an expanded list of targeted House races.

The incumbent’s political troubles are tied largely to missteps and problems unrelated to policy, including rampant social media rumors late last fall that he would resign. The local district attorney in Topeka is investigating whether Watkins violated state election laws by listing a box at a UPS Inc. store as his residence on a voter registration form.

Though he grew up in Topeka, Watkins lived most of his adult life outside Kansas and hadn’t voted in its state or federal races until running for Congress. He wasn’t active in the local or state GOP before he won the 2018 primary with less than 27% of the vote.

“There is just a level of discomfort with Steve Watkins,” said former state Rep. Virgil Peck, chairman of the GOP in Montgomery County in southeast Kansas. “There’s still that little bit of uncertainty, distrust if you will.”

Watkins has the National Right to Life Committee’s endorsement but LaTurner has the backing of the conservative Family Policy Alliance of Kansas.

LaTurner also picked up the Kansas Farm Bureau’s endorsement, which confers cachet in rural areas and signals some nervousness within the GOP establishment about Watkins. Moreover, LaTurner’s honorary campaign co-chairs include a current and a former Republican National Committee member and big GOP donors active in the Kansas Chamber of Commerce.

As Watkins filed for office late last month, LaTurner’s campaign criticized him for accepting more than $20,000 in contributions in 2018 and 2019 from donors who also gave to Democrats.

The attack touched on doubts about Watkins’ fealty to the GOP that have lingered since he eked out a win during his crowded 2018 primary race. Three Democratic operatives said Watkins, a 43-year-old former Army officer and military contractor, had talked to them about running for Congress as a Democrat. He strongly denies it.

“There’s still with a lot of Republicans, grassroots Republicans and others, they haven’t fully verified that he is a conservative,” said former Kansas GOP Chairman Kelly Arnold.

Watkins shrugged off LaTurner’s demand that he return contributions from 10 donors named by LaTurner’s campaign. He said after filing that he’s voted 96% of the time in the House with Trump and said LaTurner is “creating unnecessary division” within the GOP as he seeks to climb the political ladder.

“I’m a guy who would like to do something, as opposed to somebody who wants to be somebody,” Watkins said.

The American Conservative Union recently gave Watkins an 86% rating for 2019. LaTurner, a former state senator, had a 76% rating from the group during his time in the Legislature.

University of Kansas political scientist Patrick Miller said Watkins has been a conservative congressman and LaTurner’s natural recourse is to raise a persistent question about Watkins from 2018: “Who is he, really?”

Kansas Republican Party Chairman Mike Kuckelman said he is not concerned that the GOP faces as tough a battle to keep Watkins’ 2nd District seat as it did in 2018. The presumed Democratic nominee, Topeka Mayor Michelle de la Isla, is less well-known than the 2018 nominee, ex-legislative leader Paul Davis, and the $338,000 she raised by the end of March was less than a third of what Davis had raised at the same point in 2018.

And Kuckelman said he’s heard of no problems with Watkins’ voting record as a congressman.

“I’m sure somebody could pick one vote and disagree with it, but overall, I would say he has a solid voting record,” Kuckelman said.

LaTurner cites a Watkins’ vote in November for a measure opposed by the National Rifle Association on big-game hunting overseas, which Watkins’ staff said would protect endangered species.

LaTurner also criticizes Watkins for being one of only five Republicans to vote for a non-binding Democratic resolution in December expressing support for a separate state for the Palestinians. LaTurner describes it as a vote against Trump’s Middle East policy; Watkins later praised a Trump plan for a two-state peace solution.

However, such issues seem secondary to questions about Watkins’ problems as a congressman.

“It’s not that there’s lack of information. It’s that the information that we do know is troubling,” LaTurner said, adding that Watkins narrowly won the 2018 election because Republicans felt “we had to eat our peas” to prevent a Democrat from winning.

Watkins’ problems include a Federal Election Commission review of contributions funneled by Watkins’ father to his 2018 campaign through other donors and a homeowners’ association’s now-resolved lawsuit threatening to foreclose on a condominium Watkins owns in Alaska over $1,535 in delinquent payments.

And there’s the still-ongoing criminal investigation into him registering to vote at a UPS store and whether he voted illegally in a Topeka City Council race. Watkins said he made an inadvertent mistake in listing his mailing address on a form in August, but he had to correct his registration twice within six weeks this winter.

“There’s no question that he has faults and vulnerabilities,” Miller said. “He hasn’t helped himself with these ridiculous gaffes about, where does he actually live?”

Copyright © 2020 The Associated Press. All rights reserved. This material may not be published, broadcast, written or redistributed.