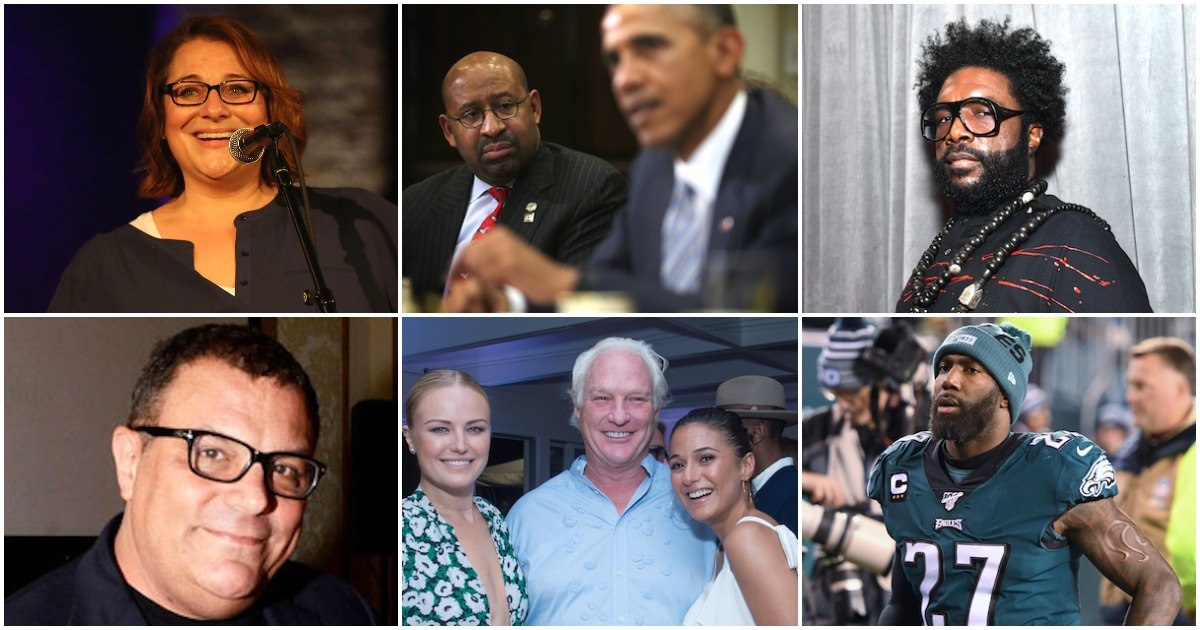 From Stephen Starr to Jennifer Weiner to the brothers responsible for ruining suburban landscapes with all those fugly McMansions.

Get a compelling long read and must-have lifestyle tips in your inbox every Sunday morning — great with coffee!

We combed through campaign finance records published by the Federal Election Commission to find out which presidential candidates, PACs and Super PACs have been getting money from some notable Philly-area residents. Note that the towns listed are those provided on the forms filed with the FEC and may represent office locations as opposed to towns of residence, in some cases.

Old City
While most prominent Philly restaurateurs don’t show up all that much in the FEC’s donations database (we’re guessing the smart money is on not pissing off your clientele when they find out who you support), Stephen Starr is different.

Bala Cynwyd
The Roots drummer, whose real name is Ahmir Thompson, doesn’t show up next to any big donations in the FEC database. But he does show up with many, many individual donations. Hundreds of them.

Gwynedd Valley
If you’re a Never Trumper, as they’re called, I hope to God you haven’t been scarfing down the popular chocolate-covered pretzels from Asher’s Chocolates. Bob Asher, the chairman of the board of the 128-year-old family company, is a Republican power broker in Pennsylvania.

Asher has donated $50,000 to Trump Victory. He’s also donated to the National Rifle Association’s Political Victory Fund, which we’re pretty sure doesn’t support Joe Biden. In 2015, Asher was a Marco Rubio guy. Before that, he donated large sums in support of John McCain and Mitt Romney.

Horsham
Robert Toll and his brother Bruce Toll are best known as the guys who destroyed suburban landscapes by building McMansions all over the place through their company Toll Bros., which has assets of something like $10 billion. Behind the scenes, the Toll brothers spend all of that hard-earned money in much different ways.

Meanwhile, Robert Toll donates almost exclusively in support of Democrats. In 2019, he donated a bit of money to both Amy Klobuchar and Joe Biden. But much more significant was the $50,000 he gave to AB PAC earlier this year. AB PAC isn’t just any super PAC. No, AB PAC funds major opposition research operations against Republicans, sending “trackers” to dig up whatever dirt they can on Republican candidates. Not surprisingly, George Soros has been a huge backer.

Kinda makes you wonder what holiday dinners are like in the Toll family.

King of Prussia
Christopher Burch, the ex-husband of fashion mogul Tory Burch, has forked over $100,000 to the Trump Victory PAC, which has raised more than $160 million in contributions nationwide since the beginning of 2019. It’s the single largest donation to that PAC from the Philadelphia region, according to FEC records. In case you’re wondering, Tory Burch is backing Biden. It’s probably good the Burches split up.

Bala Cynwyd
You probably don’t know much about Jeff Yass. And he’s perfectly happy with that. Yass is the secretive co-founder of the also secretive Bala Cynwyd-based trading firm Susquehanna International Group, which uses strategies from games like poker and chess to make a ton of money for its clients. And for Yass, of course.

Not so secret is how Yass spends his cash in politics. And he spends a lot of it.

Yass has historically backed Libertarian candidates or other non-big government candidates, like Rand Paul and Gary Johnson. But the biggest recent donation we found in FEC records was the $5 million (yes, you read that right: $5 million) he gave in March to Club for Growth Action. According to the Super PAC’s website, Club for Growth Action is “dedicated to a single mission: defeating big-government politicians and replacing them with pro-growth, limited government conservatives.”

Just before that, Yass gave $1 million to the “pro-freedom and liberty-minded” Protect Freedom PAC and $500,000 to the Term Limits Super PAC.

West Philadelphia
Former Philadelphia mayor Michael Nutter may not contribute amounts anywhere near most of the others on this list, but he does put up his money.

In the last year, Nutter has donated $3,000 to Michael Blake, a Black millennial who was running for Congress in New York. (He lost the primary, but he’s fighting the outcome, claiming voter suppression.) He’s also given small sums to support Cory Booker, Joe Biden, and various Democratic candidates seeking Congressional seats.

Queen Village
Best-selling novelist Jennifer Weiner has been making a lot of small donations through ActBlue, which, as the name suggests, leans left. Her biggest recent donation was $1,000 to Fair Fight, a voter protection PAC led by Stacey Abrams, the liberal politician and activist from Georgia.

Going back a bit further in FEC records, we find donations in the thousands to Hillary Clinton and Barack Obama.

Malvern
While we’re on the subject of female novelists from the Philadelphia area, there is Lisa Scottoline, who carved out a niche for herself writing legal thrillers.

Last year, Scottoline was all about Elizabeth Warren, making several donations in the hundreds-of-dollars realm in support of Warren’s primary battle. Now that Warren is out, Scottoline donated $2,000 to Biden’s campaign in May.

Scottoline’s biggest donations, according to FEC records, were to Hillary Clinton. She donated more than $17,000 trying to help Clinton beat Trump.

He previously wrote checks of $1 million each in support of Hillary Clinton and Barack Obama. More recently, he’s backed candidates like Elizabeth Warren, Joe Biden, Bob Casey, and Alexandria Ocasio-Cortez with far smaller sums. In January, he dropped $865,000 on the decidedly liberal Democratic Grassroots Victory Fund super PAC, whose other backers have included George Soros and executives from Google and LinkedIn.

That’s a lot of money, but it’s trounced by another type of donation he made. In 2017, Heifetz donated $16 million to LGBT causes via the Philadelphia Foundation. 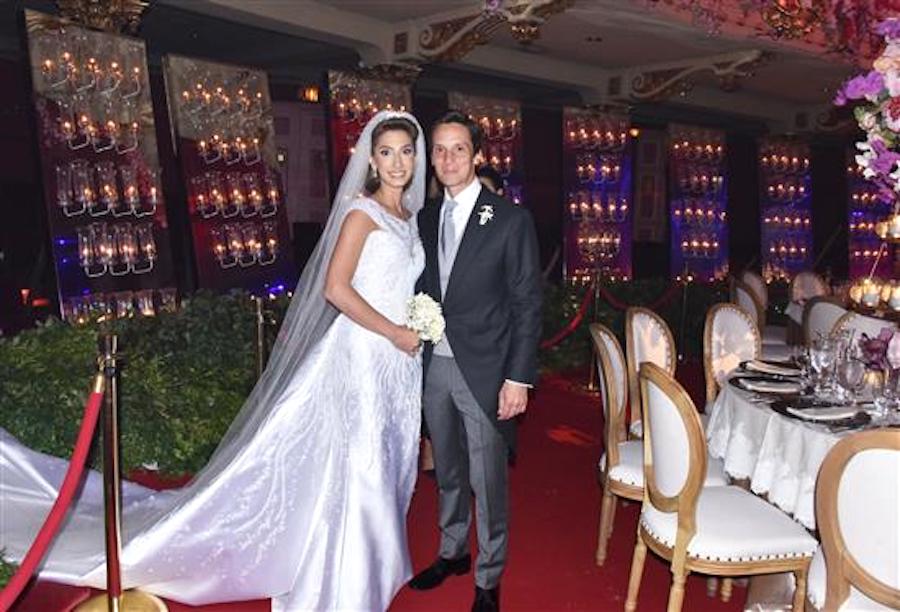 Center City
Center City lawyer John Giordano is the son of Philly Pops president Frank Giordano, who was once also the president of the crusty and conservative Union League. His wife, Yasmina Moukarzel, comes from a family that owns a wheat production company in Ghana. They’re the type of couple that has their wedding written up in the New York Times. And they are both on Team Trump, with John Giordano having served as deputy general counsel on Trump’s transition team.

Over the last year, Giordano gave the largest single donation from Philly proper to Trump Victory — $25,000 in 2019. He’s given smaller amounts as well. And Moukarzel has donated several thousand dollars to the Trump campaign.

Center City
You know Shanin Specter’s last name because he’s the son of the memorable Arlen Specter, who served in the United States Senate for 30 years. Arlen Specter was known for many things, including playing both sides of the aisle. He started his life as a Democrat. He then switched to Republican. And then back to Democrat.

Shanin Specter chose a much different career. He’s the co-founder of one of the country’s top personal-injury law firms, Kline & Specter. In the past year, he’s given $100,000 to Unite the Country, the Joe Biden-backing Super PAC that’s raised about $24 million in the last year. In 2011, Specter gave $35,800 to the Obama Victory Fund, and he also donated thousands to the Hillary Victory Fund.

Washington D.C.
The former Eagles player and current social justice warrior may not live here, but we’ve included him anyway. Jenkins has become a hugely political figure, in his own way, but the FEC doesn’t show him writing spending any huge money.

Most recently, there was a $1,000 donation in February to the NFL Players Association’s PAC, and that PAC has historically supported both Republicans and Democrats. Actually, FEC records show that the PAC has given slightly more money to Republicans, but we’re not talking about a whole lot of money here. Jenkins previously backed Cory Booker’s senate campaign.

Center City
Ronald Rubin was for years the head of the Pennsylvania Real Estate Investment Trust, better known as PREIT. The publicly-traded real estate investment firm owns tens of millions of square feet of retail space in the country, including the Plymouth Meeting Mall and Cherry Hill Mall.

Rubin has a consistent track record of supporting Democrats. He’s given $75,000 to Unite the Country over the last several months. He’s also supported Bob Casey, Hillary Clinton, Debbie Wasserman Schultz, and Amy Klobuchar in her 2018 reelection to the United States Senate.

They each donated $5,000 in December to Gridiron, the National Football League’s PAC, which has historically supported both sides of the aisle. That PAC made news when it donated money to lawmakers who were involved in the debate surrounding concussions in the NFL.

Center City
Judee von Seldeneck is the founder and chair of Diversified Search, an executive search firm that she’s been at the helm of since the 1970s. She’s also been a longtime booster of Democratic candidates.

Most recently, von Seldeneck backed Amy Klobuchar in the presidential primary, with $5,600 in donations to Amy for America. She’s also supported Congressperson Susan Wild. And Ashley Lunkenheimer. And Dianne Feinstein. Hillary Clinton, too. But von Seldeneck does occasionally write a check in support of male politicians, including Bob Casey and Barack Obama.