The number of background checks run by the FBI has surpassed 3 million in a month four times. Three of those times have been this year. There have been 38% more checks in January through June of this year than during the same time period last year, and we have already hit 67% of the total number of checks run last year.

Last year, you may recall, was the busiest year for the NICS office, for now. To break that record for checks in a year, the FBI would need to conduct about nine million more checks in the second half of 2020.

Or, about three-quarters of a million fewer checks than were run from April through June.

We have been regularly covering the monthly records set by NICS every month this year. Let’s compare June to March 2020, which was the previous record month for the highest number of background checks. March had the all-time busiest week for the NICS office and two additional top 10 highest weeks. This was driven, in part, by five individual days in March that are among the top 10 busiest days.

June 2020, the new record holder, is different. No individual day in June cracked the top 10 for highest number of background checks for a single day. Every single week in June is a top-six highest week.

This indicates a sustained level of demand for permits and firearms – this was no overnight reaction to an event or last-minute purchases before Christmas.

It was millions of Americans making the choice to keep and bear arms. The gun-owning community is growing, with millions of first-time buyers.

And just what arms are these millions of Americans choosing? Last month saw the second-most background checks related to a handgun purchase all-time (including a small number in U.S. territories) – 1,371,811 to be precise.

The annual record for handgun sales-related checks is just over 8 million. So far this year, the FBI NICS office has run just over 6 million such checks.

There were 611,997 checks for permits last month. A historical comparison is not possible due to the way some states conducted and reported permit checks in the past, but an eyeball test indicates that June is right up there among the monthly leaders. Oh, and don’t forget – there are 24 states in which a valid permit is accepted in lieu of a NICS check. Firearms sales to permit holders in such states are not included in the NICS tally.

The numbers don’t lie. This isn’t a small group of “super gun owners” buying nearly fifty thousand handguns a day. These are your loved ones, your friends, your neighbors who have decided – for one reason or another – that they must be able to rely on themselves.

The National Rifle Association of America is the organization that these gun owners can rely on to protect their rights, as we have for almost 150 years.

We will not waver.

Judging by the NICS reports for 2020, neither will law-abiding Americans. 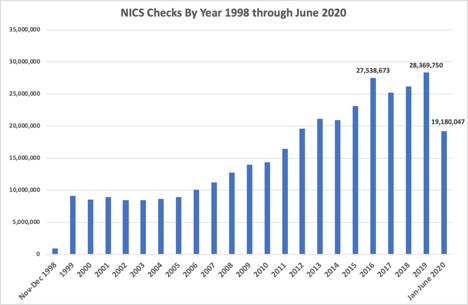