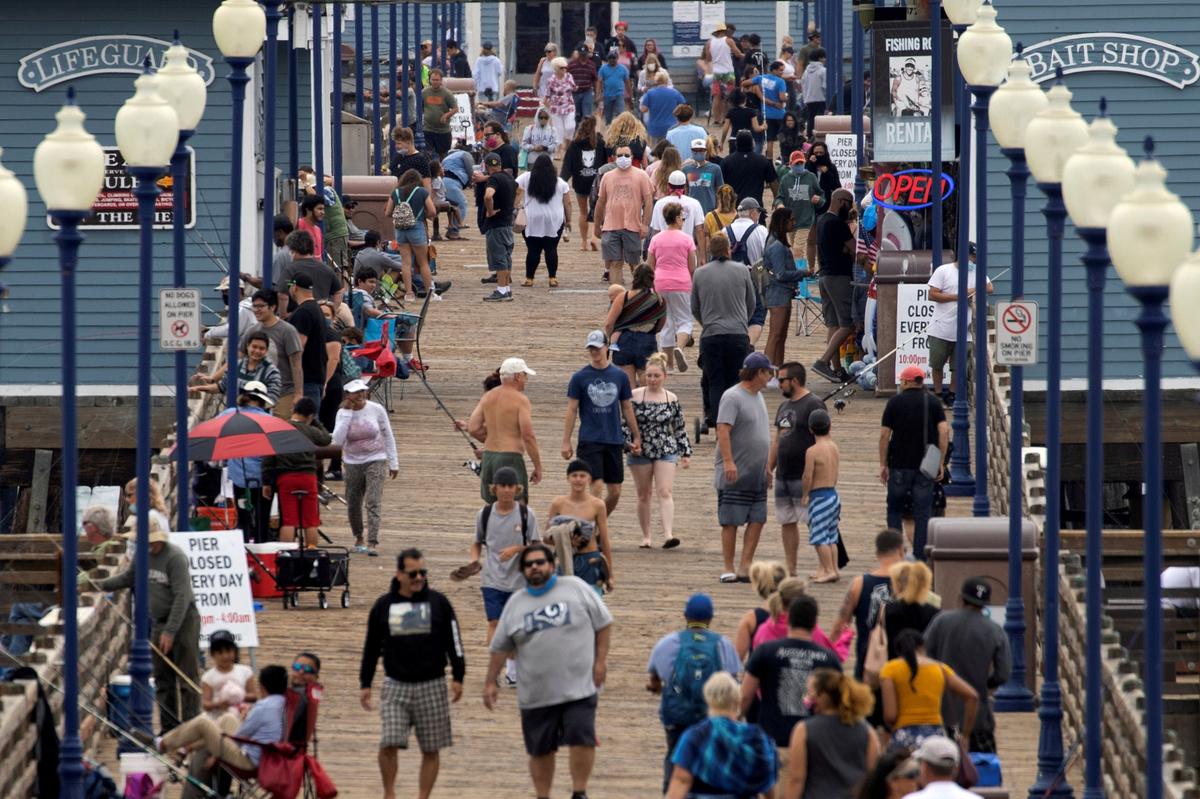 ATLANTA (Reuters) – The United States reported more than 1,000 deaths from COVID-19 on Tuesday, according to a Reuters tally, marking the first time since June 10 the nation has surpassed that grim milestone, as California closed in on passing New York in total infections.

FILE PHOTO: Few people wear masks as they walk on the beach pier during the global outbreak of the coronavirus disease (COVID-19) in Oceanside, California, U.S., June 22, 2020. REUTERS/Mike Blake/File Photo

Nearly 142,000 Americans have now died from the illness caused by the coronavirus, a toll that experts warn will likely surge following recent record spikes in case numbers and an alarming rise in hospitalizations in many states.

But in some states, governors and local officials continued to bicker over the best way to respond to the crisis.

In Texas, Governor Greg Abbott said Hidalgo county could not order residents to stay home and said mask and social distancing rules were sufficient to keep businesses open in the Rio Grande Valley, on the U.S. border with Mexico.

A court hearing on Kemp’s lawsuit against Bottoms, a Democrat who has been mentioned as a possible running mate for presumptive presidential nominee Joe Biden, was postponed after two judges recused themselves.

In Florida, the state teachers’ union has sued Governor Ron DeSantis and other officials in an attempt to halt his plans to reopen school classrooms as the state suffered a surge of more than 10,000 daily new COVID-19 cases for six out of the last seven days.

“I think it’s much better today than it was two weeks ago. And I think it will continue to improve,” DeSantis said at a briefing on Tuesday, adding that hospitals were seeing plateaus in patient numbers.

About 20% of Florida’s intensive care unit beds are available, 5% more than two weeks ago, after hospitals expanded capacity. The number of currently hospitalized coronavirus patients fell on Tuesday after rising to record highs at least nine days in a row, state data showed.

Neither Florida nor Georgia have issued statewide mask mandates. In Texas, Abbott initially resisted such an order but earlier this month agreed to require face coverings in most counties.

In Hidalgo County, cases have risen 59% in the last week to nearly 13,000 total. In just one week, deaths have doubled to over 300, according to a Reuters tally.

California on Tuesday became the second U.S. state after New York to report more than 400,000 COVID-19 cases since the outbreak was first detected in the United States in January, according to a Reuters tally of county data.

New York – the epicenter of the pandemic earlier this year – has recorded by far the most deaths of any U.S. state at 32,218. California has reported more than 7,700 deaths.

But New York now has one of the nation’s lowest infection rates and reported just two coronavirus-related deaths on Tuesday. It has eased its once strict lockdown restrictions.

Mandatory mask wearing, which public health officials say can slow the spread of the virus, has become a political issue among Americans, with many conservatives calling such rules a violation of their Constitutional rights.

President Donald Trump has been reluctant to wear a mask himself in public, but encouraged Americans on Tuesday to wear one if they cannot maintain social distance, and avoid crowded bars.

Trump-Backed Boebert Wins in Colorado; Hochul to Face Zeldin for New York Governor
Some LGBT+ Americans are turning to guns for their safety amid a rising wave of hate
ILA | California: Legislature Passes and Newsom Signs Anti-Gun Bills
Florida, NRA point to Supreme Court ruling as they fight over 2018 gun law
California Gun Owners’ Info Exposed, Here’s Who Is Affected