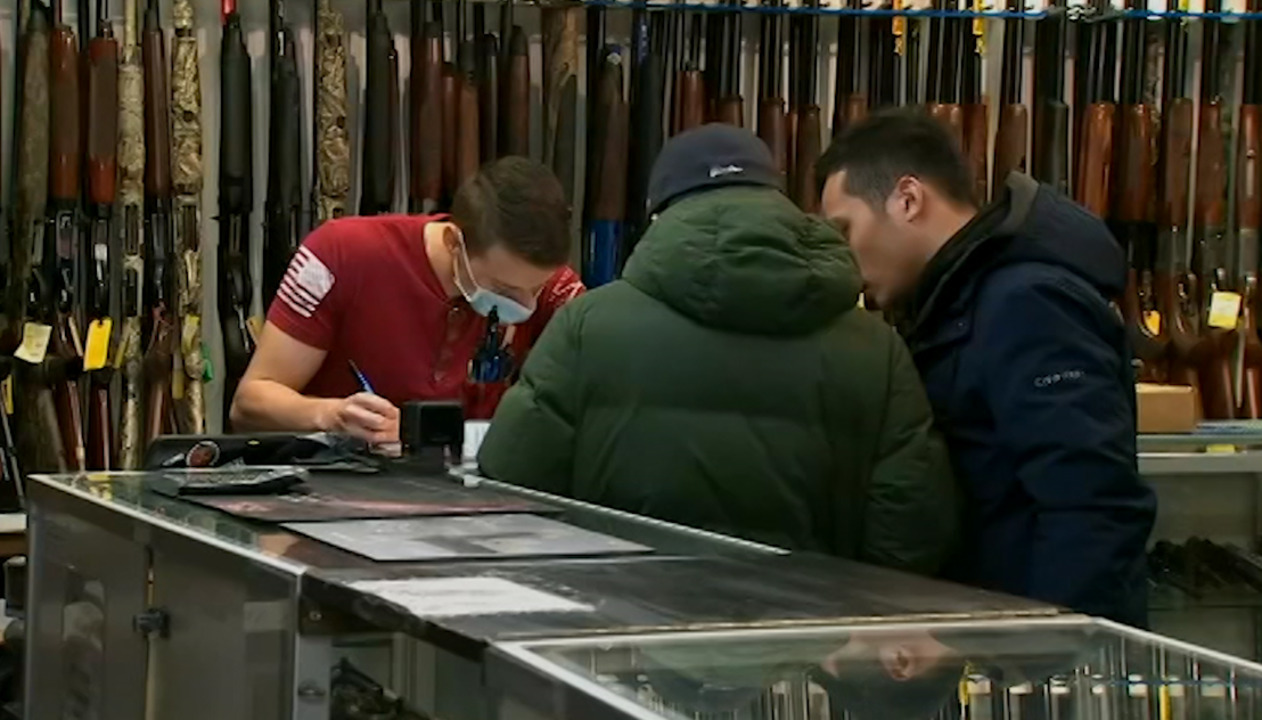 It is a slow and steady form of gun control gradually gaining momentum with limited public fanfare: If guns cannot be directly taken from the hands of citizens, the next best target is the banks and financial institutions that enable transactions or loans for the industry.

“Financial activism by banks is by far one of the largest emerging threats against Second Amendment rights,” Philip Watson, founder of Washington Public Relations and a Second Amendment advocate, told Fox News. “The federal government allows the financial industry to receive vast amounts of federal funds; however, those exact same funds free up their balance sheets enough to discriminate and play politics.”

But some argue it has reached a ridiculous point.

Miles Vining, founder of the Silah Report – a non-commercial research center that “explores contemporary and historical Small Arms & Light Weapons in the Middle East, North African, and Central Asian regions” and draws its revenue from its selling mostly wraps and patches – said that they were suddenly slapped down by Paypal last month.

“PayPal canceled my business and personal accounts because of a velcro patch that we were selling through our web store,” Vining said. “It was in the shape of a firearm called the AKS74U or affectionately known as the ‘Krinkov’ in Central Asia and the United States.”

Vining posted a call between himself at the California-based company on YouTube and told Fox News that they are no longer using PayPal for anything, personal or business-related at all, and don’t intend to go back.

“It’s a constant struggle when it comes to conducting anything that is legitimate and small arms-related in the current political climate,” he said.

In April, several Republican senators penned a letter to Treasury Secretary Steven Mnuchin, expressing concern that “several of the nation’s systemically important financial institutions (SIFI), including Citibank, Bank of America, JP Morgan Chase and others, continue to use their market dominance to financially discriminate against legal and compliant businesses for political reasons,” including “the firearms and ammunition industry.”

But a huge part of it has been political pressure.

Rep. Jennifer Wexton, D–Va., quietly introduced the Gun Violence Prevention Through Financial Intelligence Act late last year. This pushes for banks and credit card companies to automatically provide transaction data to the federal authorities on some firearms purchases with the goal of identifying “suspicious activity,” despite pushback that payment networks determining what is odd and what is not sets a concerning precedent.

And an increasing number of state leaders are taking aim.

In New Jersey, despite already having some of the most stringent gun laws on the books, Gov. Phil Murphy signed an executive order last September that mandated information from banks detailing their relationships, practices, and policies regarding gun manufacturers and sellers. The order allows lawmakers to squeeze major financial institutions to step in line or risk losing the state’s business.

But Jersey is not the only state taking matters into their own hands and going to battle with the firearms industry.

Late last year, Connecticut state Treasurer Shawn Wooden – who oversees $37 billion in public pension funds – announced plans to redistribute $30 million worth of shares in civilian firearm manufacturer securities. As part of the initiative, officially termed the Responsible Gun Policy, Wooden also intends to ban firearms-related investments in the future, in addition to putting in place a number of incentives for banks and financial institutions who adopt anti-gun protocols.

It would mark the first major move the state has taken in divesting shares in gun companies since its 2012 Newtown school shooting, which claimed the lives of 26 people, mostly children.

Meanwhile, in California, Assemblywoman Sydney Kamlager-Down, D-L.A., introduced a bill last year urging banks to stop lending to gun manufacturers and gun retailers. The measure, entitled ACR-115, “would urge all banks to discuss their lending practices with their shareholders and to adopt lending practices that mirror the people of California’s values of protecting citizens before profit.” It passed through the Assembly and is waiting for Senate approval.

And while New York’s Gov. Andrew Cuomo has stopped short of zeroing in on the banking arena, in 2018, he did instruct the New York Department of Financial Services (NYDFS) to send guidance URGING “banks and insurance companies to consider reputational risks of having relationships with the National Rifle Association (NRA).”

In 2018, the California State Teachers Retirement System – worth $222.5 billion – also voted to squeeze gun retailers into stopping weapons and accessories, a move opponents condemn as setting a concerning precedent.

The political pressure campaign ultimately started with an Obama-era initiative called Operation Chokepoint in 2013, in which the U.S. Department of Justice (DOJ) set about investigating the business dealings between banks and firearms companies.

“Around the time of Operation Chokepoint, we started encountering a lot of problems in finding a credit card company to do our processing,” recalled Gary Eliseo, founder of Competition Machine Inc., an Arizona-based maker of firearms accessories. “I finally did find a processor that took my business, but I had to assure them that we did not manufacture firearms.”

WHERE DOES MEXICO REALLY GET ITS GUNS?

He recalled an incident several years ago in which a customer sent out a payment for a custom rifle stock, and PayPal abruptly froze the account.

“They wouldn’t even let me return the money to the customer, they just froze the whole thing up and tried to make it into this big deal,” Eliseo said. “Financial institutions just don’t want to get involved. I hear a lot today about people having all sorts of problems with banks and financial institutions.”

Operation Chokepoint was eventually shuttered in August 2017 following controversy and lawsuits by companies that complained it circumvented due process and pressured the financial industry to sever ties with the firearms industry, despite no evidence of wrongdoing. Yet many in the firearms industry say doing business can still be a challenge.

Electronic payment conglomerates, including PayPal, Square, and Apple Pay, have also taken a noticeable stance, and in recent years banned firearms sales and transactions through their systems. PayPal was the first to open fire – so to speak – by making the call in 2011.

“If you’re going to have a consistent set of values that you stand up for, they have to be reflected in your acceptable use policy,” chief executive Dan Schulman told the New York Times. “Companies, and by extension, their management teams and their CEO’s have a moral obligation to try to be a force for good.”

And over the past few years, and especially in the wake of the 2016 Orlando nightclub terrorist attack, financial institutions have been cast under even more scrutiny. Several not-for-profit organizations convened to publish “Is Your Bank Loaded?” The report includes a scorecard for the 15 biggest banks, based on the accord between financing and firearms, their stance and statements concerning gun control, sponsorship of pro-gun groups, and campaign donations.

Citibank garnered the highest rank – a B. In March 2018, its parent company Citigroup paved the Wall Street way as the first to announce that it would approve a mandate which requires all its retail clients not to sell firearms to customers under the age of 21 and prohibits its customers from selling bump stocks and other devices deemed to “increase the firing rate of semi-automatic guns.”

A month later, Bank of America said that it would put a halt on lending money “to gun manufacturers that make military-style” weapons and emphasized that as a company it was purporting to figure out what it could do to “help end the tragedy of mass shootings.”

The Berkshire Bank – which had formerly issued a line of credit to Sig Sauer – the creator of the MCX rifle used in the Orlando nightclub terrorist attack in 2016 – also announced in 2018 that it would break off lending liaisons with the manufacturer.

And for some financial institutions, the anti-gun approach has doubled down as a marketing move, too. America’s largest union-owned bank, Amalgamated Bank, has launched a campaign billing itself as “America’s socially responsible bank” and urging its cohorts and customers to speak with their wallets and “join the movement.”

According to Watson, financial service providers that “get political and discriminate against legitimate customers shouldn’t be getting taxpayer-funded bailouts or subsidies.”

“This is nothing less than government-subsidized gun control,” he asserted.

Nonetheless, pro-Second Amendment businesses say that the roadblocks are forcing them to come up with creative solutions to stay afloat. Numerous gun and accessories devotees have set up their own card processing business specifically for the firearms industry, such as Stephen Bozich, who launched BareArms.com more than three years ago, with a focus on selling unfinished guns.

Larry Lopata also created his own crowdfunding site, GunDynamics.com, in 2018 to fill an industry void, given that the prominent crowdfunding sites such as Kickstarter and Indiegogo also don’t allow users to raise money for innovative weapons enterprises.

And at least for now, there are still some banks, credit card networks, and lenders that maintain that their customers are entitled to privacy and that it is not their corporate obligation to dictate what legal products Americans can and cannot buy.

Wells Fargo, in spite of receiving an “F” on the gun-control scorecard,  has remained resolute in its defense of the $14 billion-a-year legal industry. The bank has continued to issue multimillion-dollar lines of credit to the likes of Sturm, Ruger & Co., but over the past year has downplayed gun lobby links.

Mastercard and Visa Inc. have also said they will not stop customers from making lawful purchases.

“We are guided by the federal laws in a country, and our job is to create and to facilitate fair and secure commerce,” Chairman and CEO Alfred Kelly said on CNBC last August. “If we start to get in the mode of being legislators, it’s a very slippery slope. We shouldn’t be determining what’s right or wrong in terms of people’s purchases.”