The Rev. Al Sharpton was among dozens of mourners who on Monday attended the funeral service for Davell Gardner Jr., the adorable 22-month-old toddler who was tragically shot dead in his stroller by a stray bullet during a family cookout at a New York City playground.

Gwen Carr, the mother of slain Black man Eric Garner, who was killed by a police officers’s chokehold in 2014, also attended the funeral service.

The family and loved ones of little Davell joined together to lay the child to rest at Pleasant Grove Baptist Church, which sits just a mile away from Raymond Bush Playground in Brooklyn where the heartbreaking shooting happened on July 12.

Two men wearing masks were seen carrying a small casket, decorated with blue trimmings and a children’s cartoon, into the venue as community members grieved outside.

Davell Gardner Sr. (left) sobbed during his sons funeral service on Monday only to be comforted by the Rev. Al Sharpton, who attended the service and gave a eulogy 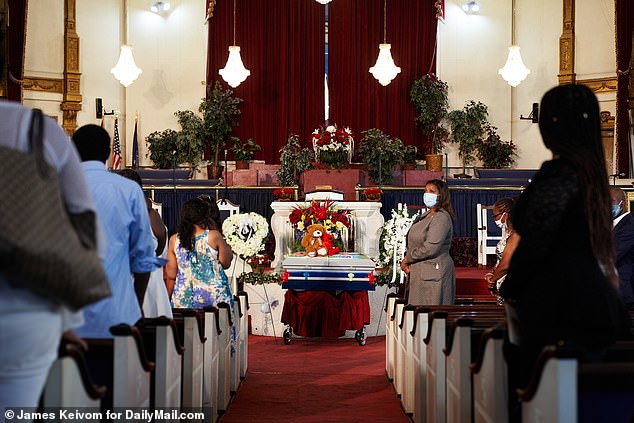 The casket for 22-month-old Davell Gardner Jr. (pictured) was surrounded by flower bouquets and stuffed toys as dozens of family and community members gathered at Pleasant Grove Baptist Church on Monday to lay the child to rest 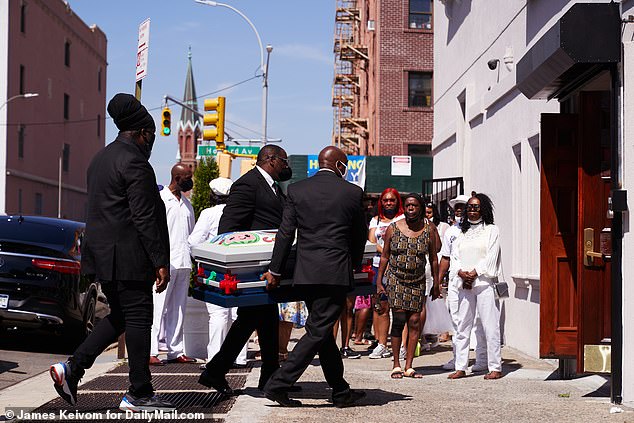 The casket of Davell Gardner Jr. is carried into Pleasant Grove Baptist Church, which sits just over a mile away from where the toddler was shot dead on July 12 by a stray bullet 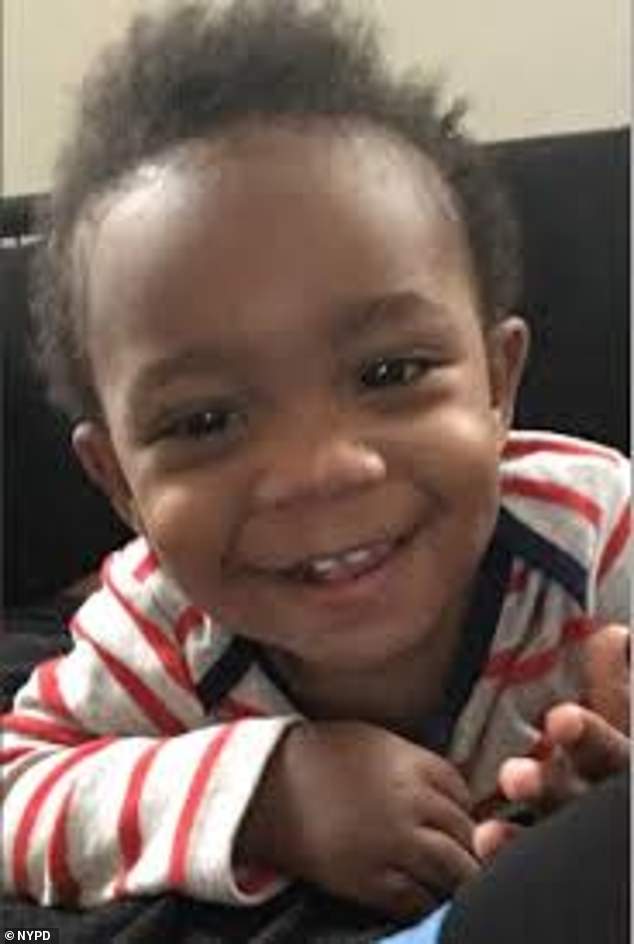 Davell Gardner Jr, (pictured) was sitting in a stroller with his family outside of Raymond Bush Playground in Brooklyn this month when two suspects opened fire around 11:35pm

‘This young boy deserves the same kind of attention that hopefully could shake up this city,’ said Sharpton.

Sharpton gave an impassioned eulogy that cast blame on gun manufacturers, gun special interest groups, Republican politicians, as well as called for Brooklyn community members to stop a slew of gun violence that has put New York City on edge in recent weeks.

‘So this is not new for us,’ said Sharpton, referring to instances of gun violence in the city.

‘But when I heard it was a one-year-old child…if nothing shakes this community to see this young baby –  [with a] casket  that doesn’t even need pall bearers – this is a disgrace that gun manufacturers, gun distributors and those that are responsible need to have to deal with,’ said Sharpton.

‘These kids out here don’t have gun manufacturing plants in Bed-Stuy, they don’t make bullets, [gun distributors] inundate our communities with guns, and we cant even get a background check legislation passed.’ 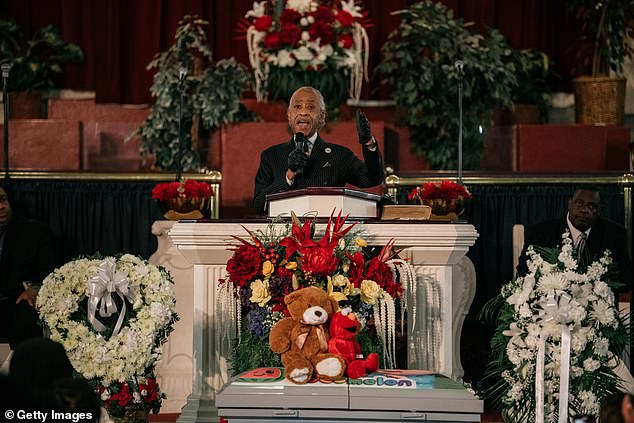 Rev Al Sharpton (pictured): ”But when I heard it was a one-year-old child…if nothing shakes this community to see this young baby – [with a] casket that doesn’t even need pall bearers – this is a disgrace that gun manufacturers, gun distributors and those that are responsible need to have to deal with’ 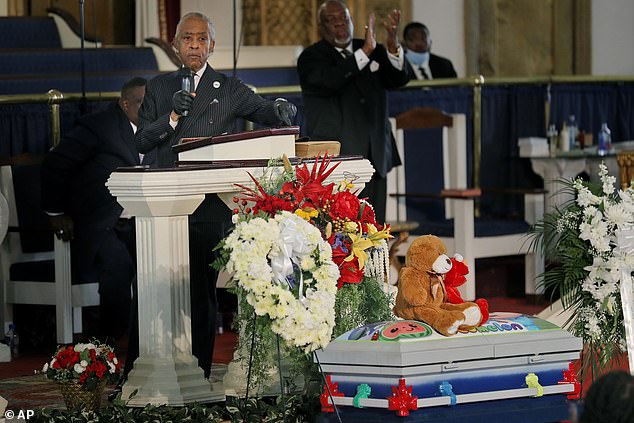 Rev Al. Sharpton said that little Davell Gardner Jr. is around his grandson’s age and added that a similar incident could have happened to him 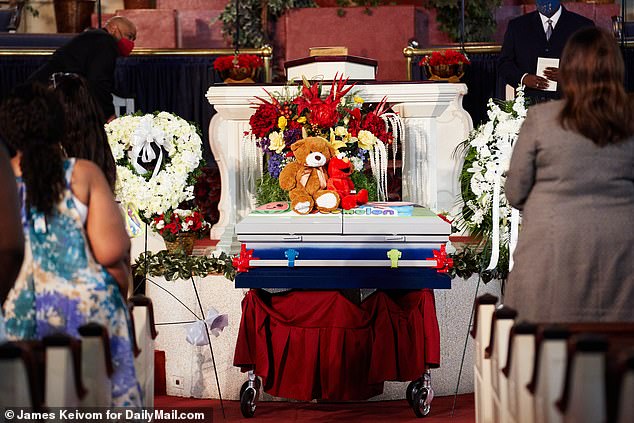 Pictured: The casket of Davell Gardner Jr. is visible at Pleasant Grove Baptist Church on Monday during the funeral service 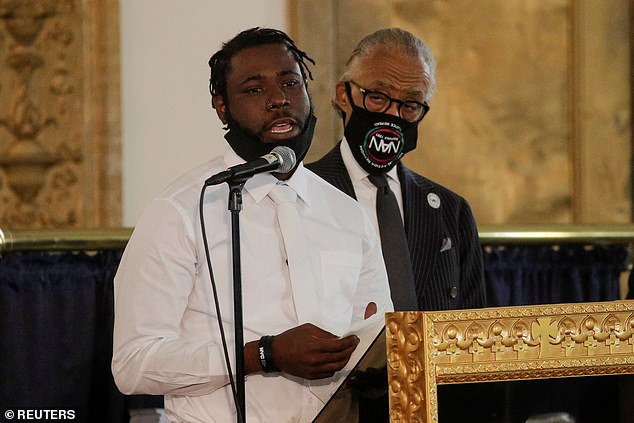 Gardner Sr. (left), pictured with the Rev. Al Sharpton: ‘It was such a great experience being a first time father and having a son. And gun violence took my son. I love you Junior’ 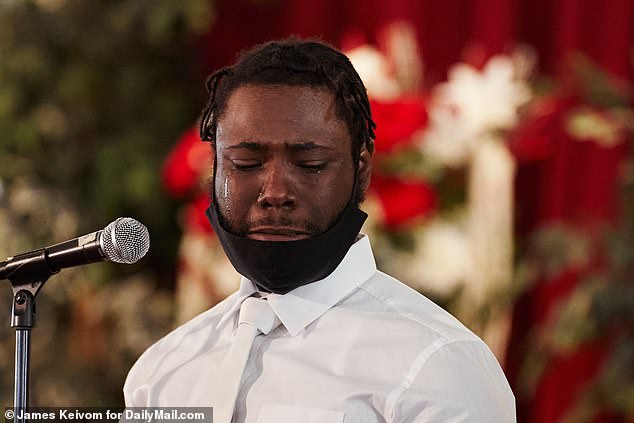 Davell Gardner Sr. (pictured) broke down crying when talking about his son and recalling how he will no longer be able to spend time with Davell

He added that it’s ‘not that we’re playing the victim’, but ‘many of you are cowardly and won’t fight the NRA or the right-wing that benefit off of this.’

Sharpton added that Davell was around the same age as his grandson and a similar incident could have happened to him.

‘This boy was not even two-years-old…that could have been my grandson. If you can look at a baby and not stop this gun violence, then you are not worth anything to anybody,’ said Sharpton.

As Sharpton spoke, the toddler’s casket sat surrounded by bouquets of flowers with a large teddy bear and an Elmo toy on top.

Sharpton then took a moment to compare the ongoing Black Lives Matter movement that has taken the country by storm to instances of violence within the Black community.

‘Black Lives Matter, well did those voices matter when we end up doing it to each other? Matter means it matters, and this one-year-old boy matters to me! And it ought to matter to you and matter to everybody in this city.’ 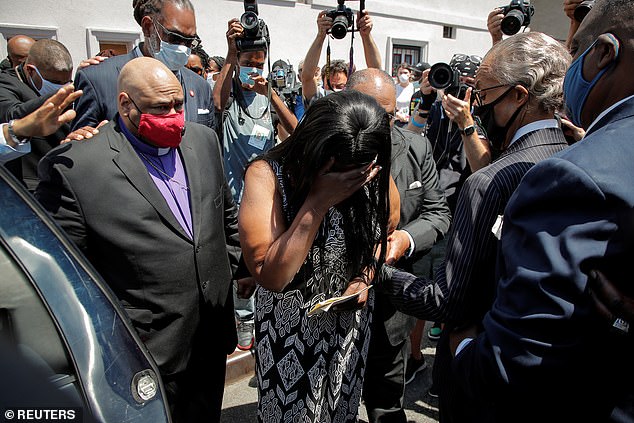 Samantha Gardner, grandmother of 1-year-old Davell Gardner Jr., who was shot and killed while sitting in his stroller during a family barbecue in the Bedford-Stuyvesant neighborhood of Brooklyn, is overcome by grief during the funeral at the Pleasant Grove Baptist Church 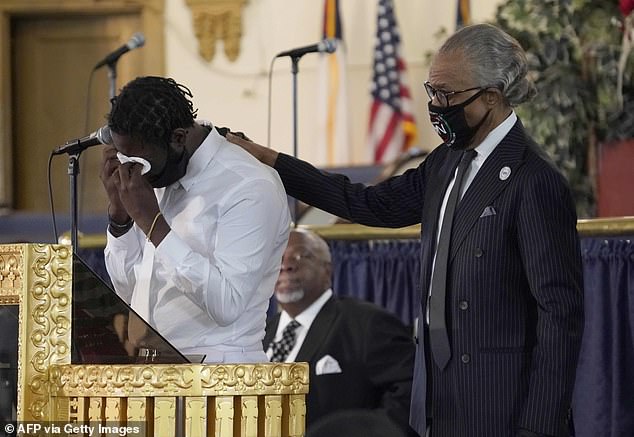 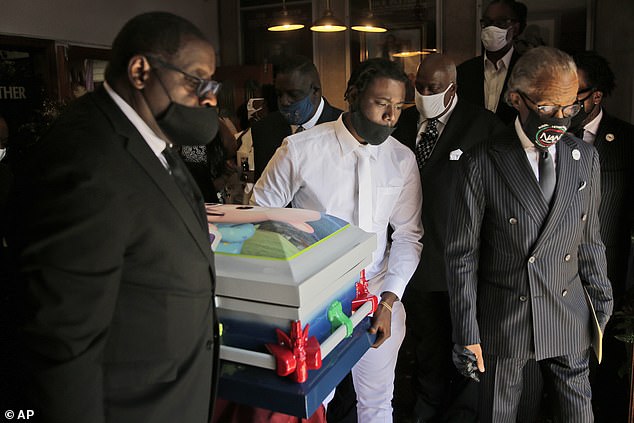 Davell Gardner Sr. (center) helps to move the coffin of his son, Davell Gardner, Jr., out of the church as the Rev. Al Sharpton accompanies them following the funeral service 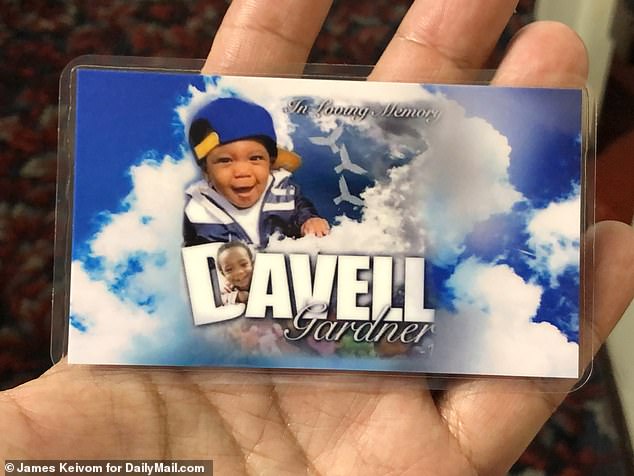 Pictured: a prayer card at the funeral of Davell Gardner, Jr. at Pleasant Grove Baptist Church

‘Black lives do matter, but Black lives and the lives of babies must matter to us first and foremost.’

During the funeral service, Sharpton also comforted Davell Gardner Sr., as the heartbroken father became overwhelmed with emotions and teared while talking about his baby boy.

‘You know, that’s my first born son and he carried a legacy for my family,’ said Gardner Sr. 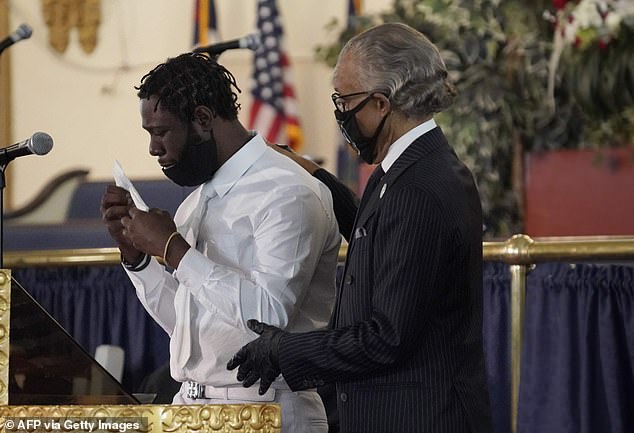 Gardner Sr. (left), comforted by the Rev. Al Sharpton (right): ‘He could change anybody’s day. He just had so many people that he loved and they loved him back. The day Junior was born was the happiest day of my life … and he was taken too soon.’ 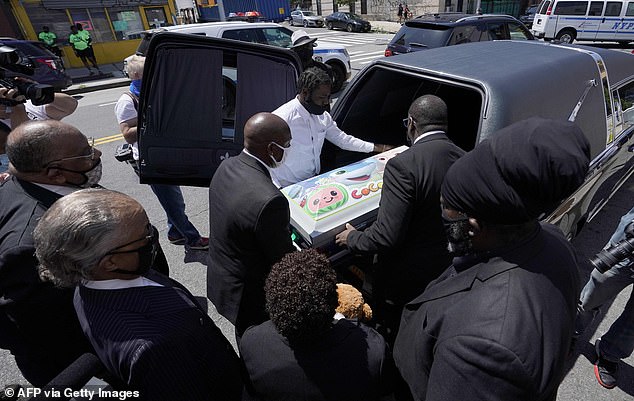 Davell Gardner Sr, the father of Davell Gardner Jr. (center) and Sharpton carry the casket at the conclusion of the the funeral service 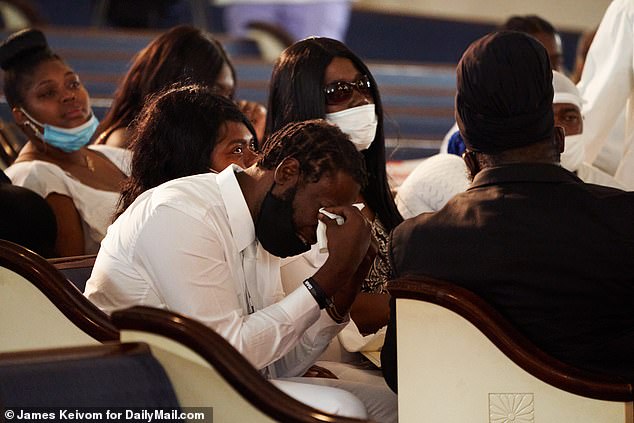 Gardner Sr. was overcome with emotions during the funeral service just two weeks after his first-born son died in a shooting in Brooklyn 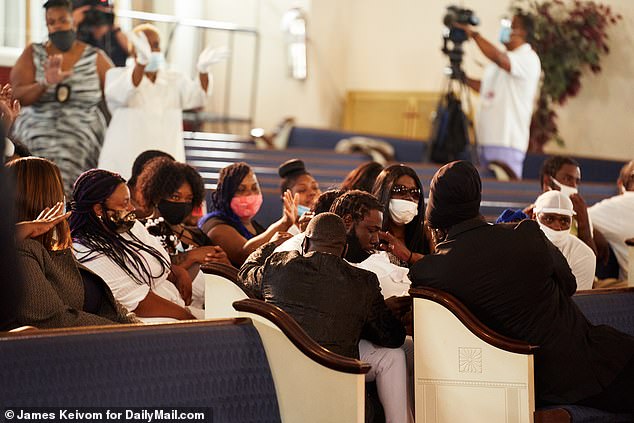 Gardner Sr. is consoled by family members and loved ones after speaking at the funeral of his son on Monday when he recalled being a first-time father 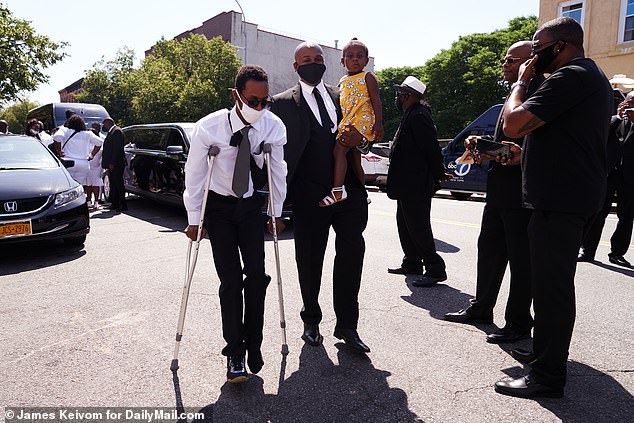 Gardner Sr. remembered his son as a sweet, smiley child whose inner light could illuminate a room.

‘He could change anybody’s day. He just had so many people that he loved and they loved him back,’ said Gardner Sr. ‘The day Junior was born was the happiest day of my life … and he was taken too soon.’

The distraught father sobbed as he recalled the wonderful experience he had raising Davell.

‘It was such a great experience being a first-time father and having a son. And gun violence took my son. I love you Junior,’ said Gardner Sr., according to Pix 11. 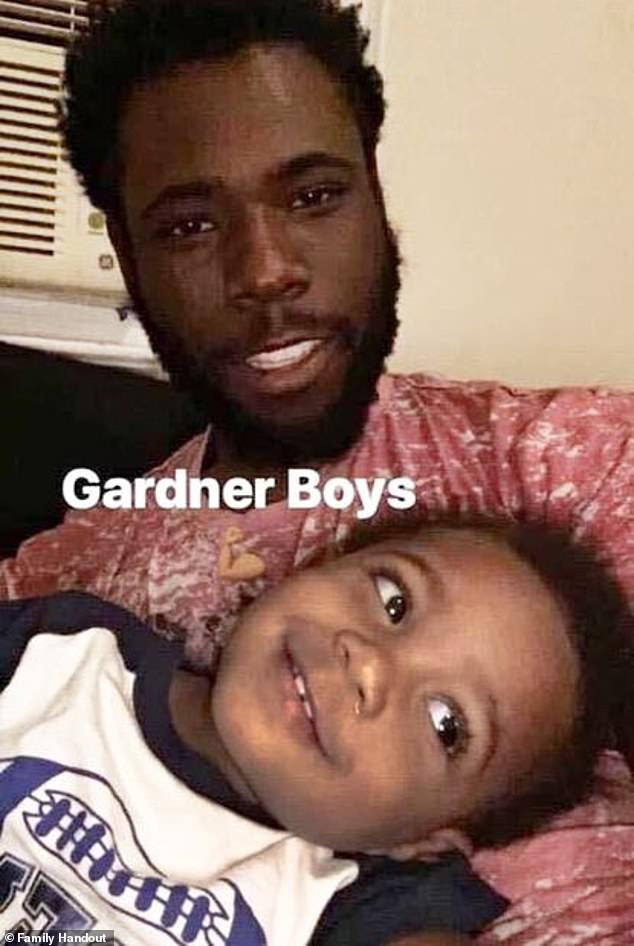 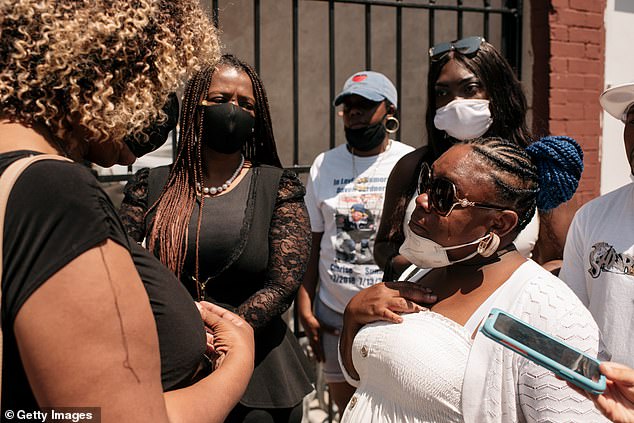 As the small casket was placed inside a hearse after the funeral, Gwen Carr said she attended the service because she understands what its like losing a child.

In July 2017, officers in Long Island approached 27-year-old Eric Garner over suspicions he was selling single cigarettes that day.

During the arrest, one officer placed Garner in a chokehold as the father-of-six desperately pleaded, ‘I can’t breathe!’ 11 times before becoming unresponsive.

Garner’s heartbreaking plea ‘I can’t breathe’ would later be echoed by three years later in Minneapolis, Minnesota, by George Floyd.

Both men died in police custody, but they and the phrase ‘I can’t breathe’ has transcended moments in time to become a national Black Lives Matter movement. 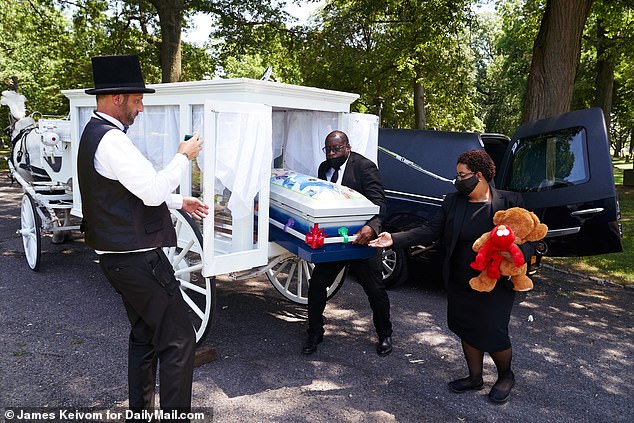 The casket of Davell Gardner, Jr. is transferred from a horse-drawn carriage to a hearse before his burial at the Evergreens Cemetery in Brooklyn, New York 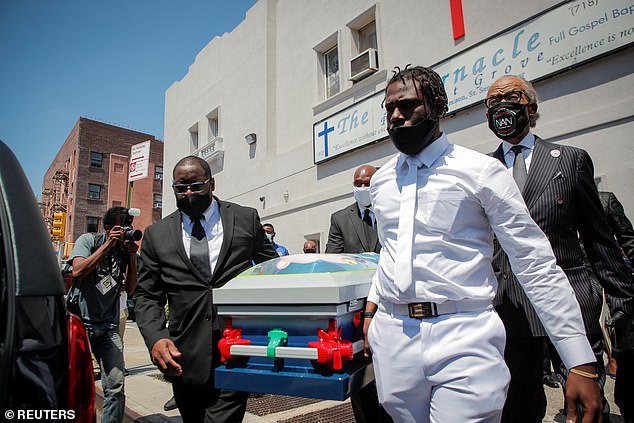 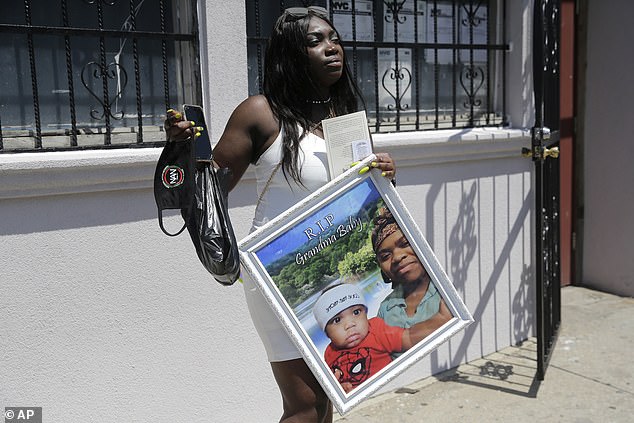 Alicia Gordon (pictured), aunt of Davell Gardner, Jr., holds a picture of Davell after his funeral in the Brooklyn borough of New York, 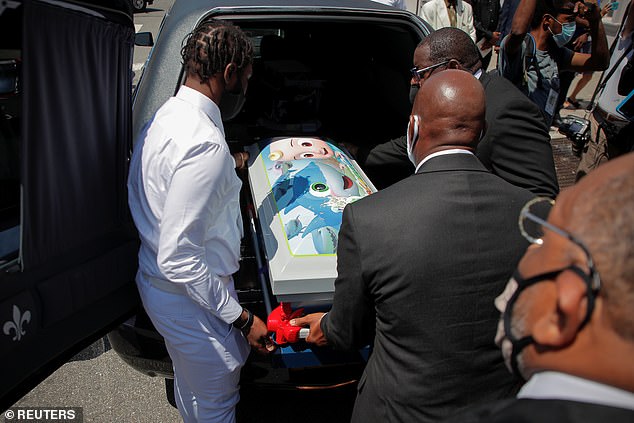 The child’s casket, covered in blue trim and children’s cartoons, was placed inside a funeral car on Monday following the funeral service

Little Davell was murdered on July 12 while sitting in a stroller outside of Raymond Bush Playground in the Bedford-Stuyvesant neighborhood around 11:35pm.

The young New York City family had enjoyed a cookout with loved ones earlier in the day and were still at the park.

Suddenly, two men dressed in all black approached the area, opened fire with a gun and quickly fled the scene as chaos ensued. The child’s stroller was left behind at the scene. 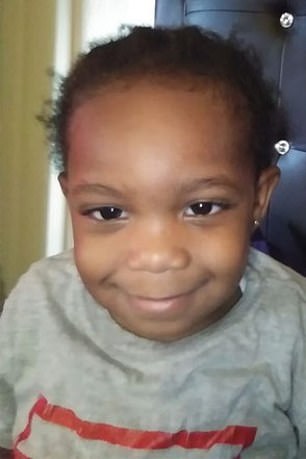 Davell., who was struck in the abdomen, was rushed to a local hospital before he succumbed to his injuries.

Mayor Bill de Blasio later observed a moment of silence and declared himself ‘heartbroken’ over the boy’s death, part of a recent surge of gun violence in the city.

‘A baby boy, Davell Gardner Jr., one years old, playing at a playground. Davell was just starting his life and his life was full of possibilities. And now he’s gone.’

Three other men in the area at the time of the shooting were injured, but survived the scary incident.

No charges have been filed yet, but a person of interest is reportedly in custody.  Local police have urged residents to come forward with information in the case to bring justice for Davell

The boy’s grandma Samantha had earlier told The New York Daily News: ‘So, when is it going to end? When are these young African American men, when are they going to stop with the shooting and the killing of all these innocent kids? It don’t make any sense.’

Calling Davell  the ‘joy’ in her life, she added: ‘They need to stop this gun violence. I feel like this: You all are ranting and raving about black lives. But you take a life that was only a year and half old. And it’s not fair.’ 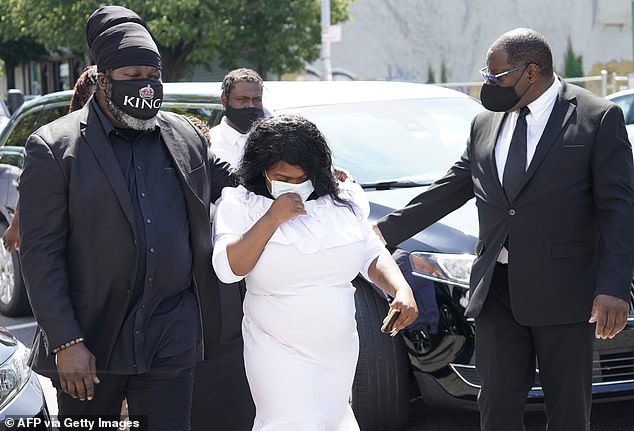 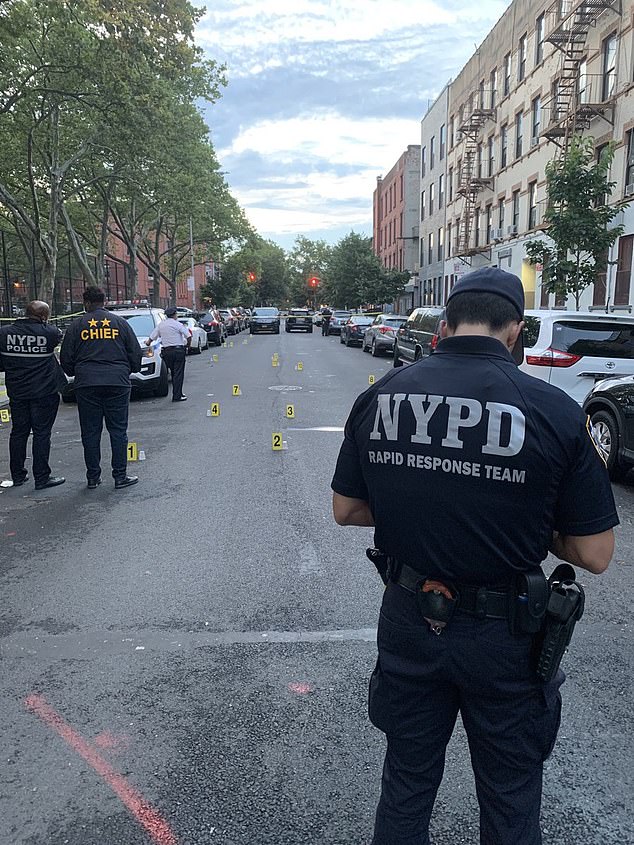 Anyone with information on the case should contact the Crime Stoppers hotline at 1-800-577-8477, or text CRIMES and then enter TIP577, or visit www.nypdcrimestoppers.com 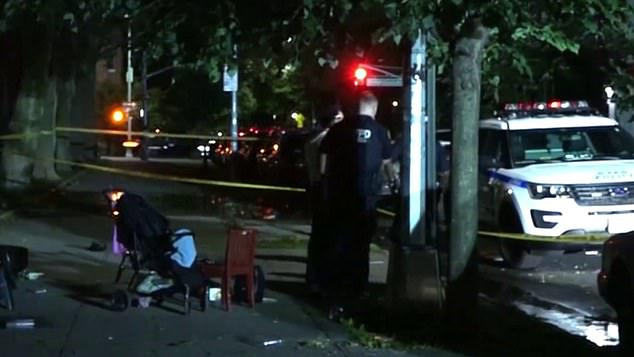 Garner’s family was outside Raymond Bush Playground in the Bedford-Stuyvesant neighborhood having a cookout. A stroller was left at the scene as well as several chairs

Davell Sr. noted that not enough people are pushing for change in the community.

‘The community is just getting worse and worse. Nobody’s doing nothing about it. Nobody. Nobody is trying to make a change,’ said Gardner Sr.

‘And it’s sad to say that. Like every day is just worse. You don’t know if you’re going to live to see the next day.’

The young toddler’s death comes amid a surge in gun violence and shootings across New York City’s five boroughs in recent weeks.

There was a 231 per cent increase between that week in 2019 and this year.

One hundred and fifteen New Yorkers have been fatally shot since the year began, which is an additional 69 victims compared to the same six-month period last year.

In total, there have been 777 shooting victims with the majority of incidents involving people between the ages of 18 and 40.

On Sunday, eight people were shot dead in New York City, including a 16-year-old boy and an 18-year-old. who were found with gunshot wounds to the head.