Updated at 3:40 p.m. with LaPierre comments.

WASHINGTON — With New York trying to dissolve the NRA over allegations of persistent corruption, President Donald Trump suggested a friendlier home base Thursday: Texas, where some top Republicans shrugged aside the accusations and rolled out a welcome mat for the powerful gun lobby.

“The NRA should move to Texas and lead a very good and beautiful life,” Trump said at the White House after news of the New York attorney general’s investigation. “Texas would be a great place and an appropriate place for the NRA. … They’ve been absolutely decimated by the cost of that lawsuit, and it’s very sad.”

While the suggestion seemed to come out of the blue, this time last year The Washington Post reported that NRA chief executive Wayne LaPierre — accused Thursday of draining tens of millions of dollars from the nonprofit for personal gain — had sought to have the NRA buy him a $6 million mansion in a gated community in suburban Dallas.

The 10,000-square-foot French country-style estate in Westlake has lakefront and golf course views. The deal never went through. but it attracted the attention of New York investigators. LaPierre maintained that he and his wife needed a more secure place to live after the February 2018 rampage at a high school in Parkland, Fla., where a gunman killed 17 people.

“The NRA has been instrumental in defending our Second Amendment rights and we would welcome them with open arms to relocate to Texas!” Paxton tweeted.

The @NRA has been instrumental in defending our Second Amendment rights and we would welcome them with open arms to relocate to Texas!

Said Patrick: “Unlike Blue State NY, we support the 2nd Amendment. People who buy guns don’t vote for Democrats who want to take them away.”

The embattled group is headquartered in Virginia but chartered as a nonprofit in New York.

Mike Cox, legislative director for the NRA’s Texas affiliate, the Texas State Rifle Association, said by phone that he liked Trump’s suggestion of moving to Texas but had never heard it discussed.

“I don’t know if it’s serious or not,” he said. “I think the NRA would be wise to move out of New York state. It’s hostile to so many things that we believe in. And you see them driving people away anyway with the high taxation rate and the personal income tax and everything so there’s many reasons that people are moving to Texas.”

As for New York’s legal allegations, Cox doesn’t believe LaPierre and other NRA leaders did anything wrong. “This is a just a tactic of … cancel culture” to attack Trump and his allies, he said. “We still have confidence in them.”

The NRA has been a major force in politics for decades. But according to New York authorities, LaPierre, its chief executive of four decades, and others have diverted huge sums for personal use, including $64 million in just three years.

New York Attorney General Letitia James filed lawsuits accusing them of fraud, asking a court to dissolve the organization and to force LaPierre and three top deputies to repay inflated salaries and other ill-gotten gains.

NRA national president Carolyn Meadows called the allegations a “rank political vendetta” timed to hobble a “leading voice in opposition to the leftist agenda” ahead of the 2020 election.

LaPierre called the lawsuits “an affront to democracy and freedom … aiming to dismantle and destroy the NRA,” which he insisted “is well-governed, financially solvent, and committed to good governance.”

The NRA’s lawyer, Dallas-based William Brewer, said in a statement that “we will aggressively defend this organization and its members. … The transactions in question have been reviewed, vetted and approved — and every dollar spent by the NRA has been in furtherance of its mission to defend constitutional freedom. End of story.”

Trump rallied NRA members at the Dallas convention center in May 2018 when the group held its annual convention there, three months after the Parkland massacre. 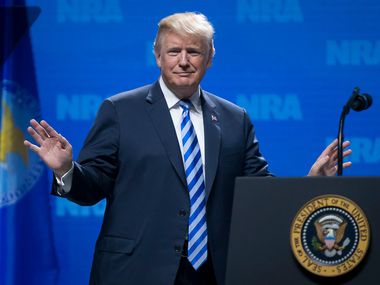 Texas Democratic strategist Matt Angle tweaked Paxton, who has been under indictment for five years for securities fraud, which he denies, for enabling a criminal enterprise.

“While a conscientious NY AG is looking out for NRA members & prosecuting crooked executives who ripped them off for $millions$, equally crooked Ken Paxton is giving NRA execs a green light to move to TX & keep ripping off sportsmen & other gun owners,” Angle asserted.

Said Manny Garcia, executive director of the Texas Democratic Party, “We don’t want the NRA here.” He added that it’s telling to see Paxton “beg the NRA to move to Texas during the week of the anniversary of the El Paso and Midland shooting.”

While a conscientious NY AG is looking out for NRA members & prosecuting crooked executives who ripped them off for $millions$, equally crooked @KenPaxtonTX is giving NRA execs a green light to move to TX & keep ripping off sportsmen & other gun owners.#txlege https://t.co/IExpWKYGj3

Before the latest allegations, Texans were evenly split on their views of the influential gun rights group.

A Dallas Morning News/University of Texas at Tyler poll last month found that 33% of registered voters in Texas have a favorable view of the NRA, with 32% holding an unfavorable view and the rest undecided.

The partisan split is severe: 56% of Republicans hold a favorable view, and 57% of Democrats hold an unfavorable view.

Roughly four in 10 Texans reported owning a gun in the survey. Self-reported gun ownership was higher for city dwellers, at 46%.

At Texas Gun Sense, a gun safety group that has long disagreed with the NRA’s tactics and rhetoric, executive director Gyl Switzer said that wherever the NRA is located, “if they continue to operate the way they do, they’re a problem for the United States.”

She noted that the New York litigation has “nothing to do with the Second Amendment” and “everything to do with a nonprofit operating allegedly in a completely irresponsible manner.”

“I don’t think any Texan should want that organization as part of the Texas nonprofit community,” she said.

“We’ve long known of the NRA’s corruption, which has lined the pockets of executives while advancing deadly policies that have cost countless lives,” she said. “…The NRA is a shell of the juggernaut that once held dangerous sway over Washington. Wayne LaPierre and his allies sit at the center of a tangled web of corruption and self-dealing. They are nothing more than crooks in fancy suits.”

MSNBC Bewails Lack of Weapons Ban: “What’s It Going to Take?”
Biden Says He’ll ‘Count Votes’ For Assault Weapons Ban
10-Round Magazine Is More Than Enough
The question is not, ‘What is it about Colorado?’ | John Moore | Arts & Entertainment
Walmart has faced calls to ban gun sales for years. Will Chesapeake change that?