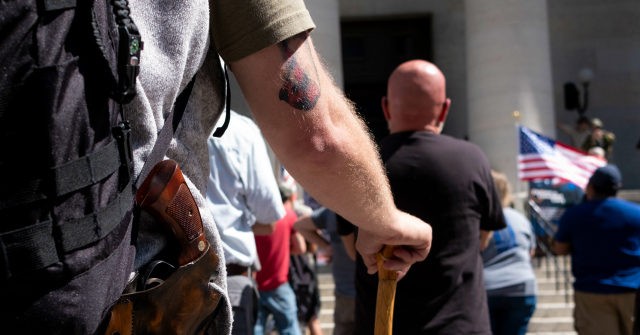 New York’s civil lawsuit against the National Rifle Association (NRA) is a “political stunt” that will “backfire” on Democrats and the broader left in the presidential election, said Mark W. Smith, a lawyer and author, whose latest book is First They Came for the Gun Owners: The Campaign to Disarm You and Take Your Freedoms.

New York Attorney General Letitia James filed a lawsuit on Thursday calling for the NRA’s “dissolution” and accusing its executives of mishandling funds.

“This is going to tremendously backfire on the anti-gun, anti-freedom movement in the United States,” Smith estimated.

Smith added, “[This has] reminded conservatives, gun owners, and gun rights enthusiasts of the importance of the November election because it’s bringing to the fore what will happen if Donald Trump doesn’t win in November and Joe Biden gets in.”

If elected president, Joe Biden would “appoint more Supreme Court justices [such as] Sotomayor and Kagan,” warned Smith, adding that “both … voted in the McDonald case in 2010 that there is no individual right to bear arms, even in your home with a handgun.”

Smith noted a pattern of cyclical political coordination between left-wing news media and Democrat officials, identifying the Empire State’s lawsuit as an example.

“[The cycle begins with] a lot of publicity in the mainstream media about some issue,” Smith said. “The next thing is those allegations appear in a legal procedure or lawsuit somewhere, and then the media reports on those same allegations, yet again, with another news cycle using the lawsuits or the legal proceedings as another excuse to talk about the same things.”

“If they really had the goods on these individuals at the NRA — my opinion as a lawyer — then they have the option to go criminal, to do a criminal indictment or bring criminal charges, but they didn’t do that here,” Smith said.

Smith continued, “They brought just a civil lawsuit and they [do] a press release [and] get a splashy headline, so I don’t think there’s any debate. This is a political stunt designed to get anti-NRA, anti-Trump, anti-conservative messaging out to the mainstream media.”

The lawsuit is an “unforced error” by “attorneys in liberal, blue states,” Smith determined.

Smith concluded, “They have reminded the conservative movement and the people that are interested in politics that what the left has in mind for us is the Beto O’Rourke approach of, ‘We’re going to take away your guns.’”

“Due to the rioting, I think there has been an increased embrace of gun rights at this moment, knowing that the police cannot protect you all the time. I can’t tell you how many people have reached out to me and said, ‘I’m not a huge Trump supporter, but I’m getting my guns — right now.’”