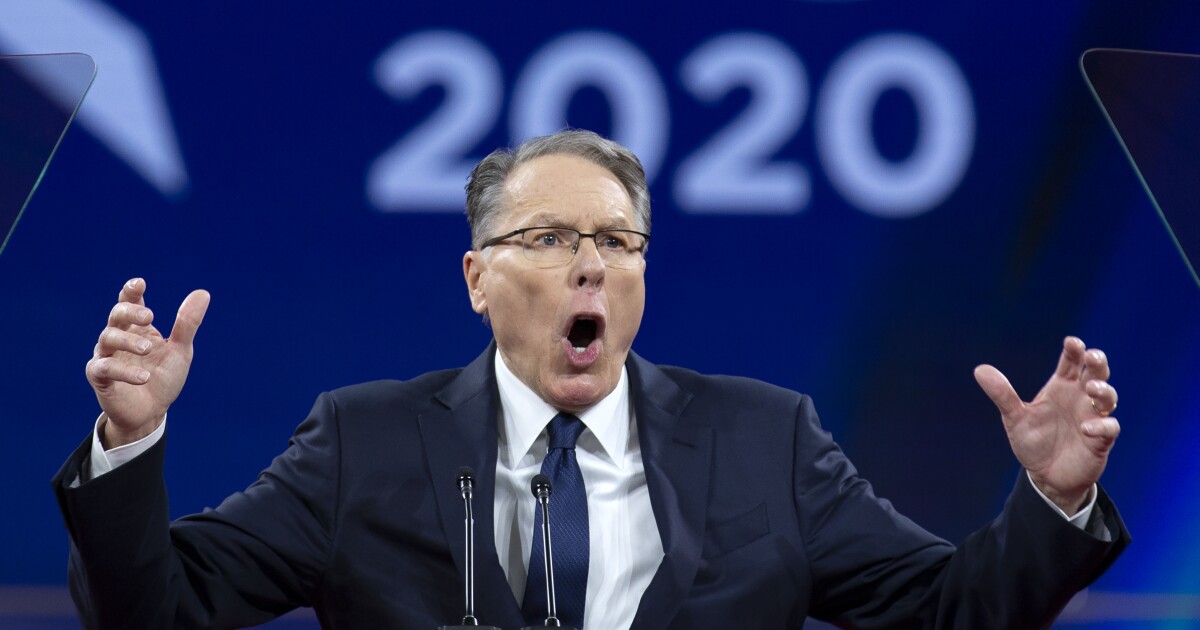 New York state Atty. Gen. Letitia James has pointed a loaded gun at the National Rifle Assn., accusing its leaders of fraud and self-dealing. Does she have enough firepower for a big kill?

James’ 164-page civil complaint is chock-full of allegations of brazen and embarrassing corruption. It devotes 17 pages alone to the conduct of the organization’s controversial frontman, Executive Vice President and Chief Executive Wayne LaPierre. According to lawsuit, LaPierre treated the NRA, and the membership fees of its 5 million members, as a personal piggy bank, tapping the nonprofit to fund an extravagant, luxurious lifestyle.

Among the claims in the complaint: LaPierre charged the NRA for private jet travel not only for himself, but also for his wife (a “volunteer” with the NRA) and extended family. He has argued that the private jet is necessary for his security, but the lawsuit alleges that more than $1 million went for trips when LaPierre wasn’t even a passenger.

There’s much much more: Allegations of personal expense reimbursements to the tune of $1 million in four years; of several million dollars in annual expenses for LaPierre’s personal and home security; of goodies, including an African safari and the use of a 107-foot yacht, provided by NRA vendors; and of a secret “poison pill” contract, not disclosed to the NRA’s board, designed to pay LaPierre millions for life, even after he had left the organization.

The complaint includes similar if slightly less lurid allegations against three other members of NRA leadership.

“Enough is enough,” James thundered at the news conference justifying her call for the organization’s dissolution. She has a reputation for ambition, even scalp hunting — during her 2018 campaign, she promised to investigate the New York-chartered NRA, calling it a “terrorist organization.” It is surely no coincidence that the lawsuit was filed fewer than 100 days before the 2020 presidential election, but the meticulously detailed complaint looks solid, and it was signed by section chief James Sheehan, a well-respected career federal and state prosecutor.

Even if James and company can prove most or all of the allegations, is it enough to kill the NRA?

At the least, the lawsuit is likely to bring down LaPierre, and to force the organization to disavow him along with his conduct. One of the most polarizing figures in America, LaPierre has made himself into the face of 2nd Amendment extremism, reflexively parrying every effort at gun reform and doing it with self-righteous arrogance. James’s complaint seeks to have him removed for cause and required to make good on his illegal compensation, with interest. The facts as presented could also lay the groundwork for federal criminal tax violations and possibly state criminal fraud charges as well.

Whatever LaPierre’s defense, he would find it difficult to escape serious damage in the fight, and the NRA could easily be decapitated. The organization, however, may well survive.

Dissolution is an extreme penalty, and there appear to be very few instances where courts have upheld such a punishment. To succeed, James must prove root-and-branch, systemic corruption of such duration that it puts the organization beyond salvation.

Comparisons have been made to the dissolution of the Donald J. Trump Foundation in 2019, another New York “charity” hauled into state court for illegal, self-dealing behavior. But the two cases aren’t the same. President Trump voluntarily walked away from his moribund nonprofit. The NRA won’t walk away.

Moreover, if the court orders the dissolution of the NRA in New York, where it has operated for nearly 150 years, there is little to stop it from reincorporating elsewhere. (The NRA attorney who let the organization continue to be chartered in New York all these years is presumably in hot water.) Trump, whose 2016 campaign benefitted from millions in NRA support, already tweeted his advice: “Move to Texas and lead a … beautiful life.”

The lawsuit is also certain to be a fundraising bonanza for the organization, which immediately called it a “baseless, premeditated attack on our organization and the Second Amendment freedoms it fights to defend …. We will confront it and prevail.”

In the end, the NRA will almost certainly settle. Beset by infighting and defections in recent years, in part over whistleblower charges related to LaPierre’s extravagances, it will think better of airing its dirty laundry in court or putting its fate into the hands of a Manhattan jury.

James will be happy to settle too, as long as she can declare a victory. For that, she will insist on LaPierre’s scalp, in addition to structural reform in the organization, such as the creation of a vigorous whistleblowing program.

Given LaPierre and the NRA’s outsized success at determining gun policy in this nation, dethroning the CEO and heaping the organization with humiliation and penalties would represent no small achievements on James’ part. As the organization emerges from New York’s assault, it might see the wisdom of less obnoxious leadership and a modicum of flexibility. That’s a direct hit, even if it isn’t fatal.