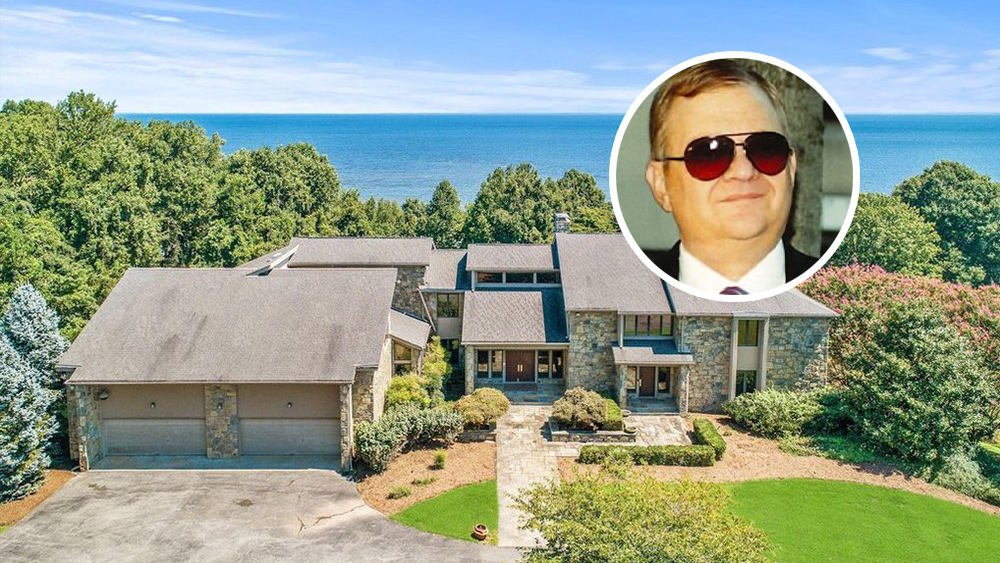 The sprawling, stone-clad Chesapeake Bay estate of Tom Clancy, the late, best-selling author of spy-thrillers like “Patriot Games,” “The Hunt For Red October” and “Clear And Present Danger,” recently sold for $4.9 million, much below its $6.2 million asking price.

The pastoral property was where Clancy dreamt up many of his most famous and enduring characters. It seems, however, that the author left the ending of one of his greatest thrillers — the state of his financial affairs — to be scripted posthumously. An on-going, bitter squabble continues to brew between his first wife, Wanda (and their children) and his substantially younger second wife, Alexandra Marie Llewellyn Clancy, for the recurring royalties and rights related his most famous character, Jack Ryan. Meanwhile, his estate has been steadily attempting to offload his Baltimore area real estate holdings. One of those properties is the aforementioned, thickly wooded spread that fronts Chesapeake Bay in Huntingtown, Maryland. At least a portion of the roughly 400-acre property, which comprises nearly a dozen parcels, was once used as a children’s summer camp. Nowadays, a gated driveway streaks across a great stretch of lawn and leads to the property’s main house, a sprawling, 17,000+ square foot, seven-bedroom and nine-bathroom mansion that, assuming the novelist also adhered to the belief that life imitates art, is likely protected by an elaborate, laser-triggered security system.

Built in the late 1980s, the property is due for a grand makeover as the decor in the home still reflects a time period when permed hair was in vogue. In the cavernous living room, a fireplace is set in a stone-faced wall that extends all the way up to a vaulted, exposed wood ceiling. A wall of windows and a glass door look out onto the home’s large deck which features panoramic views of the water that peak beyond the property’s abundance of lush evergreens. A spacious, blue-walled kitchen sits on a checkerboard of slate tiles, and is accented with white cabinetry and black granite counters. A charming center island stands in the middle of the kitchen and houses a gas cooktop and a large ventilation hood. Clancy’s writing room, a vast wood-paneled space, features a sweeping view of the bay, while the lower level’s sizable gym, with its multitude of fitness equipment, was probably not frequented by the author, a smoker who was hardly known for his enthusiasm for the elliptical and who died in 2013, at 66, of congestive heart failure.

Clancy was a staunch conservative Republican and an avid supporter of the National Rifle Association. So, of course, the property also includes an underground shooting range located under the main house. Clancy also housed a 1943 M4A1 Sherman tank that he nicknamed “Grizzly” at the Chesapeake Bay estate, though that that piece of wartime history was unlikely included with the sale.


The sale of the property, which records indicate was purchased in 1987 for $800,000, marks a success for Clancy’s estate, which is controlled by his widow Alexandra Clancy. The estate is also knee-deep in an as-yet-unfruitful, year’s long effort to sell a humongous, harbor-view penthouse at the Ritz-Carlton Residences in Baltimore, where the couple lived part of the time. Comprised of four contiguous units that collectively span around 12,000 square feet, the mansion-sized condo is currently listed at $5.9 million, more than half the original asking price of $12 million.

Before you assume that selling off the assets of her multi-millionaire late husband is a standard and even cliché move by a young, rich widow on the make, think again. The page-turning author was too savvy to script a predictable story like that. Plot twist: Alexandra Clancy comes from money — and lots of it, too. Her father is former Philadelphia Coca-Cola Bottling Company CEO, J. Bruce Llewellyn, who was at one point ranked as one of the wealthiest African American men in the United States. When he passed in 2010, he was said to have an estimated $160 million in the bank. (P.S. She’s also the second cousin of ex-Secretary of State Colin Powell, who introduced his then 21-year-old relative to the then 53-year-old author.)

Once a freelance journalist, and now a handbag and accessories designer whose eponymous company dedicates part of its proceeds to charity, Alexandra Clancy has added to her property portfolio (and moved across the country) while trying to sell off her and her late husband’s Baltimore area properties. In late 2017, she splashed out $8.5 million — the full asking price — on a brand spanking new and very contemporary, glass-walled mansion in Beverly Hills that is probably more in keeping with her fashionista future than the bucolic Baltimore ‘burbs. Just what her gun-toting and famously curmudgeonly ex-hubby would have thought of her new life amidst Hollywood liberals is unknown, but with Amazon moving forward with a third season of its John Krasinski-starring spy thriller “Jack Ryan,” based on Clancy’s novels, he might have learned to live with it.