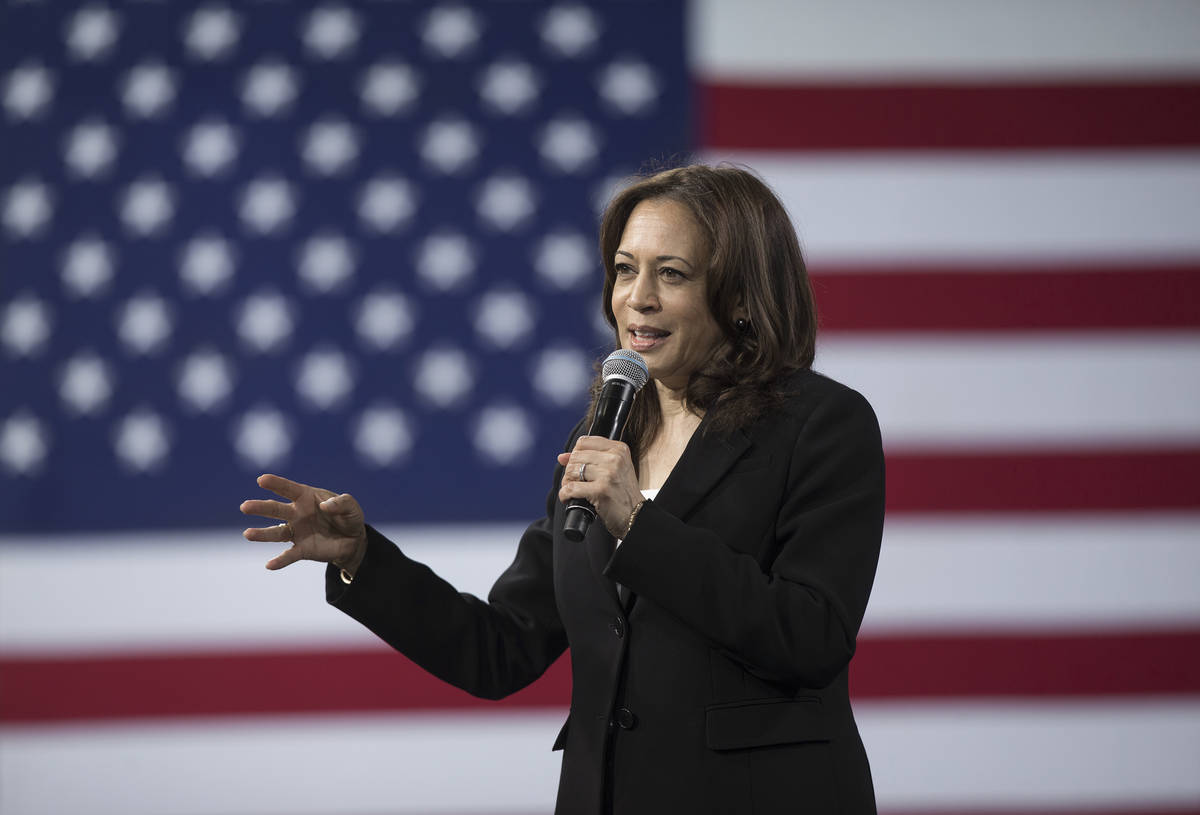 The issue of gun control is expected to be an issue in the presidential election, a topic that can galvanize base voters in both major political parties and prompt candidates to seek support from independent voters.

Gun control also hits home in certain communities that have experienced tragedy, such as Las Vegas, the site of the worst mass shooting in United States history.

“Sen. Kamala Harris has never held back from taking on the gun lobby and fighting for policies that save lives,” said former Rep. Gabrielle Giffords, D-Ariz., a gun violence survivor and advocate for greater restrictions.

Giffords is scheduled to speak before Harris accepts the vice presidential nomination during a virtual Democratic National Convention on Wednesday. Harris is set to speak on the same night.

Harris backs legislation that would make it harder to obtain assault-style weapons, such as the rifles used in Las Vegas and other recent mass shootings that have resulted in multiple deaths.

Giffords said Harris is a “fierce, compassionate, and strong leader who is willing to fight for progress.”

Gun control on the way

The pick of Harris also fueled criticism from conservatives that Harris, a liberal lawmaker from California, signaled danger for gun rights activists. In a tweet, the National Rifle Association said Harris favored a buyback of AR-15s to take them off the street.

“Mandatory buybacks are a deceptive way of saying confiscation,” the NRA tweeted. “Joe and Kamala will dismantle the 2nd Amendment.”

Kamala Harris: I support a mandatory gun buyback to take AR-15s off the streets.

Mandatory buybacks is just a deceptive way of saying confiscation.

Joe and Kamala will dismantle the Second Amendment.

“Kamala Harris and her socialist agenda pose a serious threat to every American,” Schipper said in a statement.

Guns are expected to be a major issue in the presidential election.

Both Republicans and Democrats reacted in starkly different ways following the mass shooting in Las Vegas on Oct. 1, 2017, when a lone gunman perched on the 32nd floor of the Mandalay Bay hotel used multiple assault weapons to kill 58 people and wound hundreds more who were attending a country music concert.

Lawmakers also took actions after a similar shooting nearly a month later when a lone gunman walked through a church in Sutherland Springs, Texas, and shot congregants at close range.

In the Las Vegas incident, the lone gunman, Stephen Paddock, 58, attached “bump stock” devices to assault weapons to increase the rate of fire to that of nearly fully automatic rifles.

Trump ordered the Bureau of Alcohol, Tobacco, Firearms and Explosives to later classify the devices under a regulation that bans automatic weapons like machine guns.

Nevada Republicans, then-Sen. Dean Heller and Rep. Mark Amodei, along with the NRA and other gun rights groups, favored the administration ruling over legislation to ban the devices outright.

But Sen. Catherine Cortez Masto and Rep. Dina Titus, both Nevada Democrats, filed bills in the Senate and House to outlaw “bump stocks,” and introduced other legislation to restrict the purchase of assault weapons.

Following the Sutherland Springs shooting in Texas, Congress adopted a bipartisan bill to strengthen reporting requirements. The shooter, who had a record of domestic violence before his discharge from the Air Force, also used an assault weapon.

During her unsuccessful presidential campaign, Harris unveiled a comprehensive anti-gun violence platform that called for a renewal of an assault weapons ban and the prohibition of imports of assault-style rifles.

Giffords survived an attack in a Tucson shopping center. A federal judge was killed in the shooting that targeted Giffords, who was meeting with constituents. Since her rehabilitation, Giffords has formed a nonprofit that advocates for gun safety laws.

“As we move closer to November, we are committed to doing everything we can to elect a gun safety president and vice president,” Giffords said.