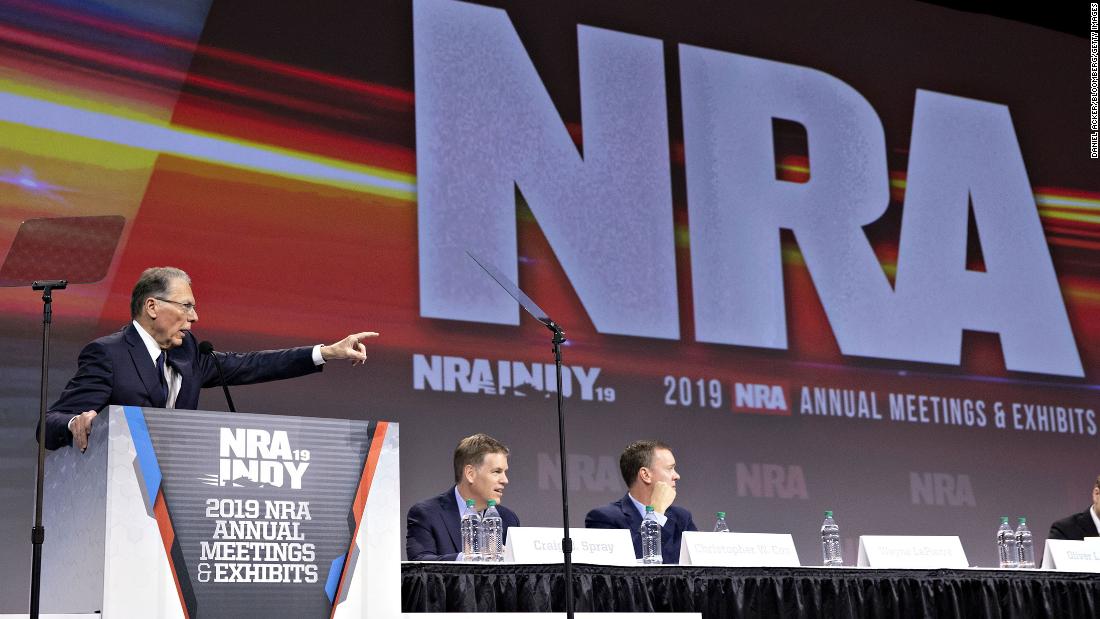 Josh Powell’s book to be published September 8, “Inside the NRA: A Tell-All Account of Corruption, Greed and Paranoia Within the Most Powerful Political Group in America,” was first reported by the New York Times.

CNN received quotes from the book from the publisher Twelve, a division of Hachette Book Group, and has not reviewed the book in full.

The former NRA member was fired in January and is named in a recent state civil suit aimed at dissolving the NRA. The suit accuses him of inappropriate spending.

The reflections in his book include the organization’s aim of spreading fear of losing gun rights and pouring metaphorical gasoline on those fears to raise money.

The purported tell-all also delved into how, in Powell’s words, “gun-toting ‘deplorables'” — driven by fear “deep in their bones” and stoked by LaPierre that then presidential candidate Hillary Clinton would steal their guns headed to the polls to turn up the vote for President Donald Trump.

Carolyn Meadows, the president of the NRA, told the New York Times “It’s not surprising Mr. Powell would try to save his failing career by peddling fiction about the N.R.A. I doubt this is a book people will read, much less believe.”

The news of the book comes after Powell and LaPierre were named in a suit filed by New York’s attorney general aimed at dissolving the NRA.

New York Attorney General Leticia James’ suit levels accusations against its senior leadership for violating laws governing non-profit groups and using millions from the organization’s reserves for personal use and tax fraud and to buy the silence and continued loyalty of former employees.

James calls for Powell and NRA leadership to no longer be allowed to serve on boards of charitable organizations in New York State. The suit also calls for LaPierre’s removal from leadership. Powell, fired in January after 3.5 years with the group, was no longer with the NRA at time of the suit.

The lawsuit also accuses Powell and others of instituting a culture of “self-dealing mismanagement and negligent oversight at the NRA.” Powell, the suit claims, was given pay increases at LaPierre’s direction that tripled his salary in less than three years “despite complaints of abusive behavior, and evidence of illegal conduct and inappropriate spending.”

Powell declined to discuss the lawsuit with the New York Times. His lawyer provided the outlet a statement earlier this month saying Powell had been “fired by Wayne LaPierre and the N.R.A.’s lawyers for his efforts to correct much of the misconduct cited in the attorney general’s complaint.”

At the time of the suit, representatives for the NRA called it “a baseless, premeditated attack on our organization and the Second Amendment freedoms it fights to defend.”

The NRA then filed a countersuit in federal court alleging that the attorney general is hampering the organization’s right to free speech in a manner that “threatens to destabilize the NRA and chill the speech of the NRA, its members, and other constituents.”

Powell told CNN in an email Tuesday: “As advised by my lawyers I won’t be able to comment on any pending litigation with the AG.”

CNN has reached out to LaPierre and the NRA for comment.

After Sandy Hook, donations were ‘open spigot’; ‘Sell the fear’

In the book, Powell recalls a 2012 conversation — before he joined the NRA — he had with executive leadership at the NRA’s advertising firm about how to handle the Sandy Hook Newtown shooting massacre, the Times reported.

Following the elementary school shooting, where 20 students and six adults were shot and killed, Powell writes, “membership money and donations were an open spigot,” and “if we needed more, Wayne would just pour ‘gasoline on the fire,’ as he put it.”

Powell said the group had one speed and direction: “Sell the fear. Pour gasoline on the fire.”

“It worked to excite the most extreme faction of our membership — they ate it up.”

Powell writes “the finances of the NRA are in shambles; it has operated in the red for the past three years, despite annual revenues of roughly $350 million a year,” according to the provided quotes.

“The waste and dysfunction at the NRA was staggering, costing the organization and its members hundreds of millions of dollars over the years.”

Powell writes that NRA membership believed “deep in their bones” that then-presidential candidate Hillary Clinton would “come for their guns” and “take away their right to protect themselves.”

“Wayne and the senior leadership of the NRA had beat that response into them like Pavlov’s dogs for twenty years.”

“To them it was a choice between Lord Don or Lucifer Hillary. It was an easy choice for them,” Powell writes, according to provided quotes.

“The simple truth was a whole bunch of gun-toting ‘deplorables’ did just that. They voted.”

In a quote provided to CNN by the publisher, Powell says he hopes to show what the NRA could be like under better leadership, and out of “a sense of hope for the future, for a better organization that can more effectively serve both gun owners and America.”

CNN’s Monica Serrano and Melanie Schuman contributed to this report.