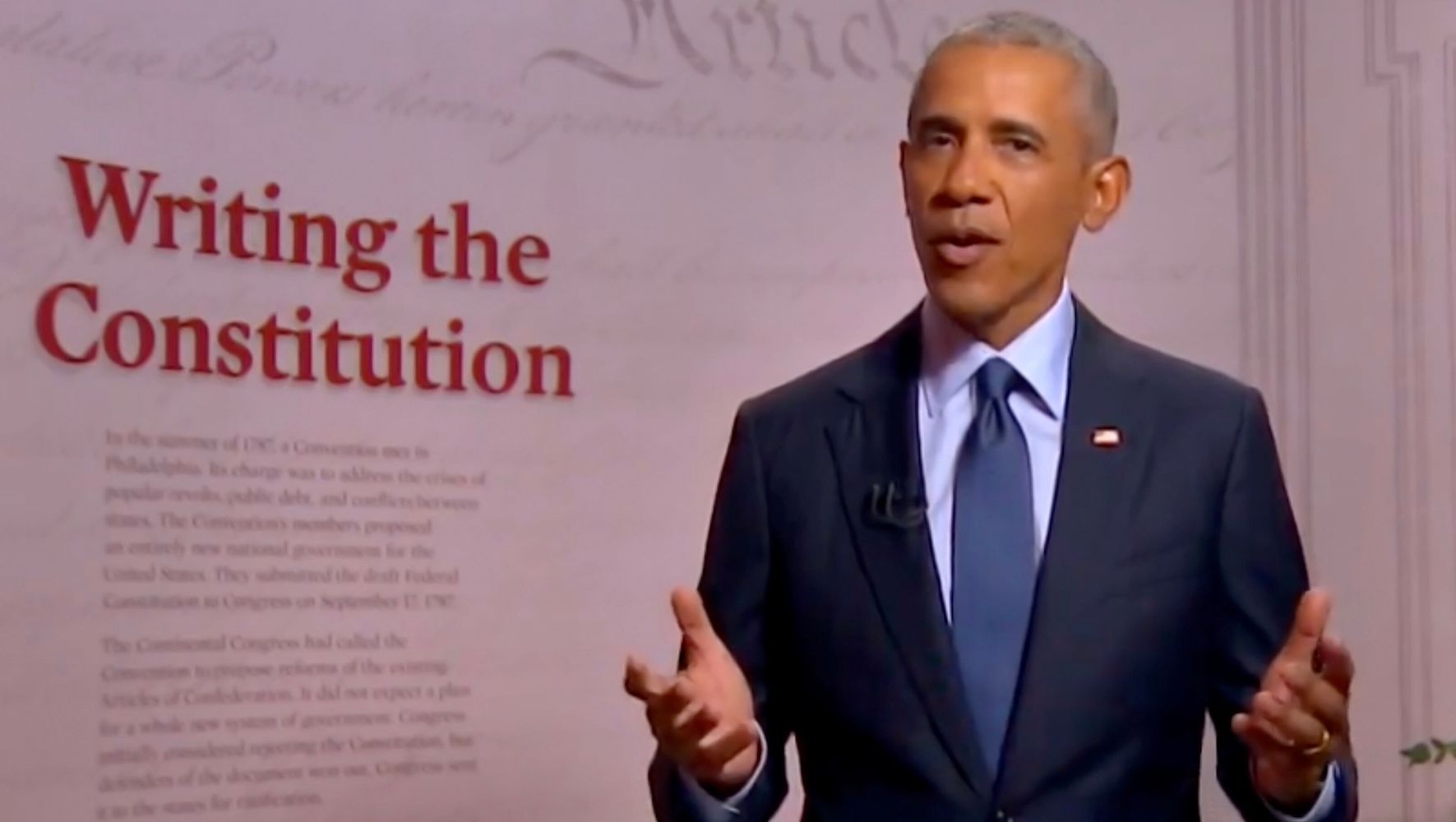 In the second half of the 10 p.m. hour on the East Coast, former President Barack Obama was using his speech at the Democratic National Convention to excoriate his successor as fundamentally unfit for the presidency, as a buffoon who thought about nothing but himself and was more concerned with petty personal grievances than the well-being of the country.

“For close to four years now, he’s shown no interest in putting in the work, no interest in finding common ground, no interest in using the awesome power of his office to help anyone but himself and his friends, no interest in treating the presidency as anything but one more reality show that he can use to get the attention he craves,” Obama said, speaking live from the Museum of the American Revolution in Philadelphia. “Donald Trump hasn’t grown into the job because he can’t.”

At 10:33 p.m., Trump decided to prove him right. “HE SPIED ON MY CAMPAIGN, AND GOT CAUGHT!,” Trump tweeted, referring to a false conspiracy theory obscure enough to confuse everyone but the incumbent’s most loyal supporters.

At 10:40, he added: “WHY DID HE REFUSE TO ENDORSE SLOW JOE UNTIL IT WAS ALL OVER, AND EVEN THEN WAS VERY LATE? WHY DID HE TRY TO GET HIM NOT TO RUN?” choosing to regurgitate political gossip instead of even attempting to argue with Obama’s diagnosis that Trump’s response to the coronavirus pandemic was a “failure.”

Here are four other takeaways from the third night of the Democratic National Convention:

The first two nights of the convention did not have much to offer young voters ― 83-year-old Colin Powell, 76-year-old John Kerry and 68-year-old John Kasich do not have many millennial or Generation Z fans. It left many progressives worried, since the generation gap is potentially the defining cleavage within the Democratic Party of 2020.

On Wednesday, the party did its best to make up for it. The first hour contained extensive segments on gun control and climate change, two of the critical causes for young people, and highlighted young activists working on those issues. A musical performance from Billie Eilish likely baffled anyone over the age of 50, but convention organizers will be thrilled she posted her message encouraging people to vote to Instagram, where she has nearly 66 million followers.

And a portion of Obama’s speech was dedicated to combating the cynicism many young people feel toward electoral politics, acknowledging that conspiracy theories and lies and interest groups can easily create apathy instead of action.

“This president and those in power ― those who benefit from keeping things the way they are ― they are counting on your cynicism,” Obama said. “They know they can’t win you over with their policies, so they’re hoping to make it as hard as possible for you to vote and to convince you that your vote doesn’t matter. That’s how they win.”

The future is still female.

Wednesday night also had a distinctly 2016 flavor, and it wasn’t just because then-presidential nominee Hillary Clinton appeared on screen wearing white while telling Americans they were stronger together. The messages countering Trump were about fighting against xenophobia, supporting young immigrants and sticking it to the National Rifle Association.

And, above all, the theme of the night ― a day after the 100th anniversary of the 19th Amendment, which granted women the right to vote ― was that Democratic women were making history even if Clinton weren’t on the ticket this time. In her speech, Sen. Kamala Harris, invoking legendary Black activist Fannie Lou Hamer and her Indian “chitthis” in equal measure, would be the first woman of color nominated to be on a major party national ticket. Introducing the senator from California were some of the women closest to her: daughter Ella, sister Maya and niece Meena.

And though Democrats have nominated another older white man to lead their ticket, the party made a point to emphasize Biden’s work on domestic violence and his support from women, young and old.

The convention also nodded to the post-Hillary Clinton resistance movement that powered their midterm victories with a video montage championing the many women elected to Congress in 2018. It served as an introduction of their leader, House Speaker Nancy Pelosi: queen of the Trump clap backs, also dressed in white, symbolic of the suffragists.

The evening began with a strong emphasis on what are traditionally thought of as social issues: gun control, climate change, immigration and voting rights.

But when the clock struck 10 on the East Coast, and network television began covering the convention, the tone shifted decidedly toward kitchen-table economic issues, especially those facing voters in the Midwestern battleground states that are considered an essential part of Biden’s path to 270 electoral votes. The change in focus seemed to reflect the conventional wisdom in the Democratic Party that running on how to help families provide for themselves is the most compelling message for the swing voters they need to win in November.

Then, speaking from a shuttered early childhood education center, Sen. Elizabeth Warren of Massachusetts delivered a speech highlighting how Biden and Harris would help ordinary people by providing every American family with affordable child care.

Warren also made sure to throw in a dash of economic populism that Biden and Harris generally eschew. “These plans reflect a central truth: Our economic system has been rigged to give bailouts to billionaires and kick dirt in the face of everyone else,” she said.

An emphasis on protecting the most vulnerable.

One of the Trump campaign’s most frequently deployed attacks against Biden is suggesting the former vice president’s policies will empower criminals and make Americans less safe. On Wednesday night, the convention tried to turn the tables on the GOP incumbent.

Much of the convention’s opening hour Wednesday highlighted some of the most vulnerable people in America: undocumented immigrants who are made to fear deportation even if their spouse is a member of the military, children who worry about mass shootings at their schools. A lengthy segment on Biden’s work to pass the Violence Against Women Act seemed designed to drill the idea that he cares about victims into the minds of any swing voters watching.

Matt Gaetz urges colleagues to abolish the ATF before it strips Americans of gun rights: ‘Cannot be trusted’
How to avoid an avalanche — and ruin a date
ILA | Hawaii: Senate Public Safety Committee to Hear CCW Restriction/Reform Legislation
ILA | Oklahoma: 2023 Legislative Session Convenes Today
Pro-gun judge targeted by Newsom might have the Supreme Court on his side