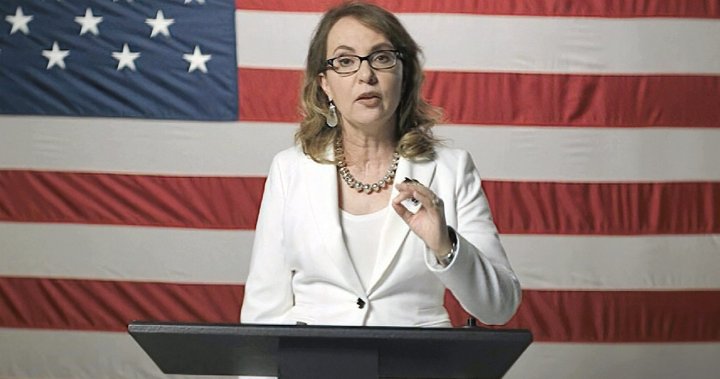 Nearly 10 years after she was shot in the head in an attempted assassination, former U.S. congresswoman Gabrielle Giffords — still struggling with her speech — delivered a powerful call for gun control to the Democratic National Convention Wednesday night.

In a prerecorded video message during the virtual convention, Giffords stood in front of an American flag as she spoke about her recovery from the 2011 shooting, which left her with brain damage and nearly took away her mobility.

“Today I struggle to speak, but I have not lost my voice,” she said, slowly but forcefully.

“We are at a crossroads: we can let the shooting continue, or we can act. We can protect our families, our future. We can vote.”

Giffords, a Democrat, urged voters to choose Joe Biden in November’s presidential election. Footage included in the video showed Biden with Giffords at events she has organized to discuss the fight for gun control legislation.

It also showed her attending then-president Barack Obama’s State of the Union address in 2012, a day before she formally submitted her resignation from Congress to focus on her recovery.

Giffords was shot while hosting a political event in Tuscon, Ariz, on Jan. 8, 2011. Six people died in the shooting, including a nine-year-old child, and 12 other people were injured by gunfire. The shooter, Jared Lee Loughner, was sentenced to life in prison after pleading guilty to avoid the death penalty.

Since her recovery, Giffords has become a prominent advocate for gun control, speaking out after multiple subsequent mass shootings in the U.S. including in Las Vegas and Parkland, Fla.

Giffords’ segment at the Democratic convention was the culmination of a larger segment on gun control, which is part of Biden’s platform.

Biden says that if he’s elected, he would ban the manufacture and sale of assault weapons and high-capacity magazines while buying back those already in communities. He is also pledging to further regulate firearms, expand background checks and close various loopholes used to purchase guns.

Biden has pointed to his past support for other gun control measures while serving in the Senate, including the bill that created the country’s existing background check system.

U.S President Donald Trump has repeatedly vowed to protect the Second Amendment, and has enjoyed the support of the National Rifle Association, which has endorsed him for re-election.

Trump has also spoken about working with Congress on gun control measures, although the initiative was dropped — in public, at least — after Democrats introduced articles of impeachment against Trump in 2019.

To date, Trump’s only major gun control move came after the Parkland school shooting in 2018, when he ordered the Justice Department to issue a ban on bump stocks, the device used to convert semi-automatic weapons into fully automatic weapons. Bump stocks were used in the Las Vegas mass shooting that killed 58 people, the deadliest shooting in U.S. history.

A sweeping gun control bill focused on schools was passed by the Democrat-controlled House of Representatives that same year. However, the Republican-controlled Senate has yet to vote on the measure.

Data from the U.S. Centres for Disease Control and Prevention says between 30,000 and 40,000 people have died from gun violence every year between 1999 and 2017. The U.S. also leads the world in mass shootings, accounting for nearly a third of all such acts globally between 1966 and 2012.