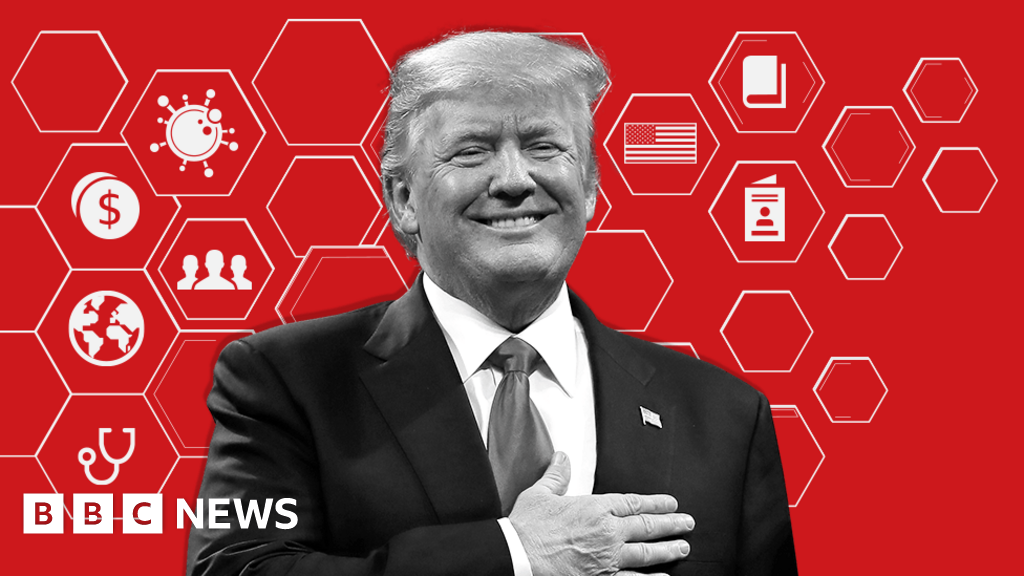 As he seeks a second term, he faces a country struggling with challenges from the coronavirus and the pandemic’s economic aftershocks – and an electorate that will weigh his record from his four years in office.

His 2020 pitch is to bring back the economy, boost jobs, protect US trade interests, and to continue with his hard-line stance on immigration.

Here in detail is where the candidate stands on eight key issues.

Bringing back the pandemic-battered economy

President Trump has long campaigned on “America First” principles, and has pushed for bringing jobs and manufacturing back to the US.

During his first campaign, Mr Trump promised huge tax cuts for working Americans, to lower the corporate tax rate, to shake up the trade status quo and to revive American manufacturing.

On some of those, he has delivered.

In the last four years, he has rolled back federal regulations on businesses, enacted corporate and income tax cuts and signed executive orders supporting preferences for domestic-made products.

Since January 2017, the US has added more than 480,000 manufacturing jobs, though analysts say growth in the sector is slowing down and Mr Trump’s related policies – like tariffs – have not addressed the structural issues at play.

Mr Trump has also predicted the economy will bounce back immediately after the pandemic – though critics say his Covid-19 response has caused long-term economic damage.

Ending the ‘reliance’ on China and protecting US manufacturing

Mr Trump first campaigned on the promise the US should put focus on its own economic interests though he has said “America First” does “not mean “America alone”.

On trade, Mr Trump has taken a hard-line stance on China, coupled with a policy to protect local manufacturers from foreign competition – and those remain the key aspects of his trade policy.

Throughout his first term, the president emphasised his work renegotiating past trade deals he says were unfair to the US – like Nafta, between the US, Canada, and Mexico – or leaving them outright – like the Trans-Pacific Partnership.

On the 2016 campaign trail, he also promised to fix the US trade deficit (the gap between imports v exports), which, for the first time in six years did decline in 2019, though economists disagree on whether this suggests an improvement in the economy.

President Trump’s ongoing trade war with China has raised border taxes on close to $500bn of annual trade, and this year’s “phase one” deal between the two nations saw most of the tariffs remain in place.

In August, he said he wants to offer tax credits to entice US firms to move factories out of China , saying “we will end our reliance on China”.

‘America First’ and reasserting US sovereignty

As with trade, Mr Trump has also promised to put “America First” in US foreign policy.

In the White House’s words, that means “reasserting American sovereignty and the right of all nations to determine their own futures”, with a focus on ensuring security and prosperity.

What has that meant in practice?

It has included stepping away from some large multilateral agreements like the Paris climate accord or pulling back from some multilateral organisations, like the World Health Organization.

He has challenged some international alliances, pushing for North Atlantic Treaty Organization (Nato) members to boost their defence spending in the military alliance.

And he has recently reiterated a promise to bring down US troop levels overseas – which are currently at about the same level as when he took office – specifically in places like Germany and Afghanistan.

Critics have said he has created tensions with historically close US allies while reaching out to adversaries like North Korea and Russia.

He has had foreign policy successes, recently helping to broker a deal between Israel and the United Arab Emirates to normalise relations.

And he has touted the killings of Abu Bakr al-Baghdadi, leader of the Islamic State (IS) group, and Iran’s powerful military commander, Gen Qasem Soleimani.

Building the wall and curbing immigration

Promises to curb immigration levels have been foundational to the president’s political career.

Now, as he seeks re-election he has promised to continue the construction of a border wall on the US-Mexico border – he has so far secured funding for 445 miles (716 km) of the 722 mile barrier.

He also vows to eliminate the visa lottery and chain migration – meaning immigration to the US that is based on family ties – and shift to a “merit-based” entry system.

Mr Trump’s plans for immigration reform faced defeat this summer when the Supreme Court ruled against his administration’s bid to rescind Deferred Action for Childhood Arrivals (Daca), which protects about 650,000 young people who entered the US without documents as children.

Though falling short of a complete repeal, the administration has succeeded in undoing parts of that law including a repeal of the individual mandate, which required people to buy health insurance or pay a tax penalty.

President Trump has also promised to bring down drug prices in the US, and in July brought in measures that would allow discounts and import of cheaper drugs from abroad, though some industry analysts have said they would not have much effect.

He declared the opioid crisis a national health emergency in 2017 and offered $1.8bn in federal funding to states for prevention, treatment and recovery measures. He has also taken steps to restrict opioid prescribing.

But critics say his ongoing efforts to dismantle the Affordable Care Act, which expanded healthcare coverage to millions, is detrimental to battling the opioid crisis.

Since he took office, Mr Trump has rolled back hundreds of environmental protections, including limits on carbon dioxide emissions from power plants and vehicles, and protections for federal waterways across the country, fulfilling a campaign promise from 2016.

He also withdrew the US from the Paris climate agreement, saying the deal disadvantaged the US “to the exclusive benefit of other countries”. That withdrawal will only be formally completed after November’s election.

Most recently, his administration approved oil and gas drilling in Alaska’s Arctic National Wildlife Refuge, which has been off-limits for drilling for decades.

President Trump has touted the First Step Act as a key step he made towards criminal justice reform.

The 2018 bipartisan bill was significant, and reformed laws at the federal level, giving judges more discretion during sentencing as well as strengthening prisoner rehabilitation efforts.

Mr Trump had also promised a follow-up Second Step Act that would address employment barriers for former prisoners, though no such legislation has been proposed thus far.

During his 2016 campaign, Mr Trump branded himself as a firm advocate of law enforcement and has remained so during his presidency, most recently escalating his support of police amid the nationwide protests against racial injustice.

In June, President Trump signed an executive order introducing several police reforms, offering federal grants for improved practices, including the creation of a database to trace abuses by officers.

The president has said that controversial chokehold methods for restraining suspects should be prohibited “generally speaking”, but has not moved to enforce a ban.

After the US was rocked by mass shootings in Texas and Ohio in 2019, Mr Trump expressed support for a series of reforms, like tighter background checks for gun buyers and “red flag laws”, which block access to firearms for those who are deemed a risk to society.

But after this initial flurry of interest, Mr Trump has done little to move these ideas forward. The president has instead continued his vocal defence of the US constitution’s Second Amendment – which preserves Americans’ right to bear arms – and of the powerful gun lobby, the National Rifle Association (NRA).