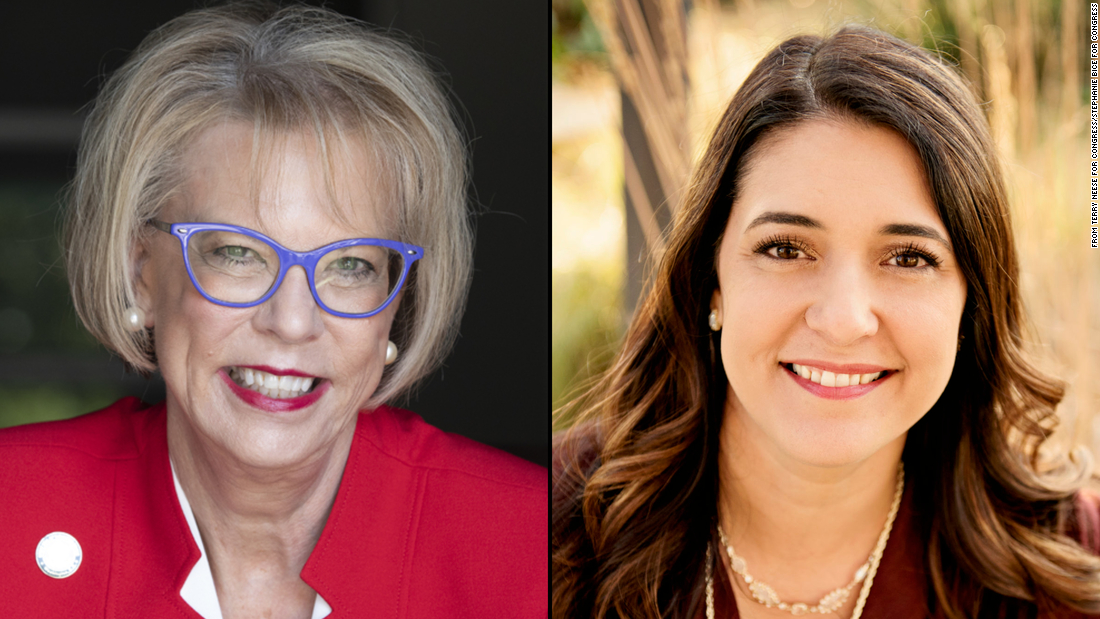 Republicans already knew their candidate in this race would be a woman, which is a big deal for a party that has seen its number of women in the House dwindle. Bice, who finished second in the nine-way June primary, defeated businesswoman Terry Neese on Tuesday in a runoff that tested two different GOP primary strategies.

“We came up short tonight, but I am incredibly humbled by the outpouring of support I have received from Oklahomans across the district since I launched my campaign sixteen months ago. Now is the time for Republicans to focus on the real fight ahead of us: beating Kendra Horn and doing whatever it takes to re-elect President Trump in November,” Neese said in a statement.

Bice overcame nearly a million dollars in outside spending against her from the conservative Club for Growth, while Neese was faced with a series of negative headlines in local media late in the race.
Both GOP candidates ran as strong supporters of President Donald Trump, who carried this district by more than 13 points in 2016, but Bice cut a slightly more moderate profile, which could help her appeal to suburban women in the general election. Neese adapted a primary message that more reflected Trump’s, donning his red hats in her campaign ads, which featured images of protesters and rioters and ominous threats about socialism.

Horn, the Democrat who scored a surprising victory over GOP Rep. Steve Russell in 2018, is among Republicans’ top targets to try to win back the House in November.

Although both sides will have plenty of outside aircover, Bice starts the general election at a significant financial disadvantage. She ended the pre-runoff reporting period on August 5 with just $80,000, according to Federal Election Commission filings. Horn had $2.6 million in the bank at the end of June.

Inside Elections with Nathan L. Gonzales, who is a CNN contributor, rates the general election a toss-up.

Both Republican women initially worked for or supported Carly Fiorina in the 2016 Republican presidential primary, but as has been the case in most GOP contests since then, loyalty to Trump was a big part of the race.

Neese, who has been around Oklahoma politics for a long time and started her own personnel agency, was co-chairwoman of Trump’s small business advisory council and fully embraced him. Bice, a younger state legislator elected in 2014, was more measured in her praise of his response to the coronavirus pandemic, including in a recent debate.
Much of Bice’s closing messaging — although touting her support for Trump and her endorsement from the National Rifle Association — was about who can win the general election. “Neese won’t take on the Squad, because she can’t beat Kendra Horn,” Bice says in a recent ad called “New Generation” that attacks Neese for “mastering the art of dirty politics, but never beating a single Democrat” over three decades in politics.

The contrast between the two candidates’ messages highlighted different perspectives on how to reclaim this district, a top priority for the GOP this year.

“It is an extraordinarily strong Trump district, conservative district. This is not one of the suburban areas where Republicans have lost females,” Neese’s campaign consultant Matt Langston said Sunday. “She reflects the seat.”

But Bice’s team saw it differently. “This is not a Freedom Caucus district. … The idea that this is some kind of slam dunk is crazy,” said Cam Savage, Bice’s consultant, referring to the competitiveness of the seat in November. “It takes a certain kind of person to win this district,” Savage added, noting that Bice’s willingness to talk about teachers and education, “which aren’t always natural fits for Republicans,” resonates with suburban women.

While Horn had the advantage of campaigning this summer without an opponent, Neese and Bice were hitting each other in advertising and on the debate stage.

Guns have been a frequent motif in their messaging. Neese’s ads include a close-up shot of her hand pulling a gun out of a car glove compartment. Bice’s ads show her firing a gun, while attacking Neese’s business for not allowing firearms on the premises. Neese’s campaign said that does not reflect the staffing agency’s policy when Neese ran it.

Neese had locked up a key Republican ally in the Club for Growth. Bice has the backing of former Sen. Rick Santorum of Pennsylvania and Rep. Elise Stefanik of New York, who rebranded her leadership PAC this cycle to support women in primaries. But neither of those endorsements came with the kind of outside help to match the Club’s.

One recent spot from the Club, featuring a dancing man wearing a unicorn mask, calls Bice “strangely liberal” and knocks her for “voting for the biggest tax increase in state history,” with the narrator saying, “That’s just weird.”

Bice took to the air defending her vote for a tax package that gave teachers a pay increase, saying, “We were shortchanging them — and our students.”

In the run-up to the June primary, after the Club had tried to tie her to Harvey Weinstein because she voted to expand a tax incentive for the film industry to come to Oklahoma, Bice blamed “sexism in attacks from groups like this” from keeping GOP women out of Congress. Bice’s runoff messaging continued to highlight the “Never Trump DC Swamp Lobbyists” attacking her, an allusion to the Club, which now backs the President but initially opposed him in the 2016 presidential primary.

Despite the spending advantage conferred by the Club in the primary, Neese was confronted with a series of negative headlines in the final stretch of the race.

Hours before the two candidates debated last week, audiotapes were anonymously sent to news outlets on which a voice — allegedly Neese’s — tells her employees to lie to clients. Neese has said the tapes are “doctored” and accused Bice of leaking them. Bice denies the charge but had used them to argue Neese can’t beat Horn.
“It’s pretty damning, and this is the type of stuff the Democrats will use against us in November,” Bice said in last week’s debate, according to News 9, a local CBS affiliate.
The tapes have fueled another line of controversy about Neese’s withdrawal from the nomination to lead the US Mint under former President George W. Bush. The Bush White House asked her to withdraw after hearing the tapes, according to the local nonprofit news site The Frontier, which cites anonymous sources who worked for the White House and the Senate Banking Committee. Neese maintains she withdrew of her own volition for family reasons.
One of the latest News 9 stories, based on IRS tax records, is about her family business profiting from a nonprofit Neese founded. Her campaign argues that her business actually lost money overall on leasing space and employees to the nonprofit, and Neese has said that the organization’s board — on which she does not have a vote — made the decisions.

This story has been updated with additional developments Tuesday.