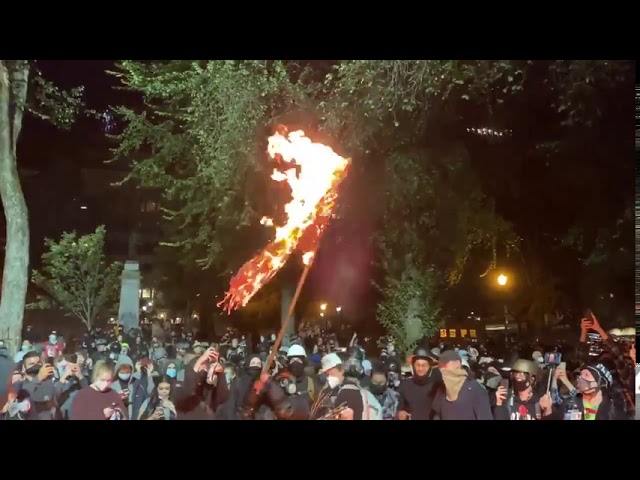 At least 13 US cities “have cut funding from police department budgets or decreased officer numbers with several more in the process,” according to a recent report by Forbes. Austin, Texas, one of the recent additions to the list of cities defunding police, cut $150 million, nearly a third of its police budget.

Austin joined a list of major cities that have already voted to defund police. New York and Los Angeles made cuts mere weeks after the current wave of protests began, and in Seattle, the first black police chief of the city, Carmen Best, resigned after the city council “voted to strip the police department of some resources, including cutting around 100 jobs.”

Several cities however, voted in recent months to increase funding for their police departments, according to a July report by the Wall Street Journal:

“Houston, Phoenix and San Diego—the fourth-, fifth- and seventh-biggest cities in the U.S. by population—have all increased their police forces’ funding in budgets passed in the past month as much as 5%… Criminal-justice specialists said the cities increasing their police budgets have more conservative voters…”

Meanwhile, in Portland, Oregon, where there has been continuous violence for three months, rioting had been blamed on intervention by federal law enforcement officers, even though the daily rioting had preceded their appearance by weeks. Portland’s Mayor, Ted Wheeler, joined BLM and Antifa rioters against federal forces sent to the city. “We want them to leave,” he said. While media reports tried to claim that tensions have subsided after the federal forces withdrew, the facts are quite different. Riots continue in Portland and local businesses have been fleeing.

Greg Goodman, co-president of Portland’s Downtown Development Group, wrote in a recent letter to Mayor Wheeler and the city council that the number of businesses moving out of the city “is like nothing I have seen in 42 years of doing business in downtown”. Goodman said that the businesses leaving included Daimler Chrysler, Air B&B, Banana Republic and Microsoft, and argued that their departure “does have most everything to do with the lawlessness you are endorsing downtown.”

“I would encourage each of you to walk around downtown Portland in the morning… You aren’t sweeping the streets, needles are all over the place, garbage cans are broken and left open, glass from car windows that have been broken out is all over the streets, parks are strewn with litter… You are willfully neglecting your duties as elected officials to keep our city safe and clean.”

Cities have been in flames. Rioters have looted and destroyed countless businesses, often where people, many black, have invested their whole lives and savings. The police, in several places reportedly told to stand down, have had bricks and fireworks and bottles of frozen water thrown at them. A manufacturing business belonging to Kris Wyrobek in Minneapolis was unrecognizable, along with countless other commercial properties. The city’s first survey of property damage showed that “nearly 1,000 commercial properties in Minneapolis were damaged during the riots, including 52 businesses that were completely destroyed and 30 other locations that sustained severe damage”, leaving parts of the city dotted with charred ruins resembling a scene from an apocalyptic movie. “The fire engine was just sitting there, but they wouldn’t do anything,” Wyrobek told The Star Tribune.

“That was my life; that was everything to me,” Flora Westbrooks said about her hair salon, which rioters burned to the ground. “Now, I don’t have a place to go.”

At least Ms. Westbrooks is still alive. Others are not. In St. Louis, Missouri, 77-year-old retired police captain David Dorn was shot and killed trying to stop his friend’s pawnshop from being looted.

“Unless we take action,” Andy Ngo, a journalist, told the Senate Judiciary Committee’s Subcommittee on the Constitution at a hearing on August 4, “what is happening in Portland today will soon be happening in cities across the country.”

“What we have witnessed are almost daily violent protests and riots led by Antifa. Even when they aren’t starting fires, using explosives, and trying to maim officers, they leave threatening messages like decapitated pig heads outside the courthouse.”

New York’s SoHo neighborhood, after rioters looted it, looked like an urban warzone. The city’s mayor, Bill de Blasio, nevertheless actively supported BLM and Antifa’s demands to “defund the police” by cutting $ 1 billion from the NYPD. Shootings are now up 72% over the same period last year; in Brooklyn, a drive-by shooting recently killed a one-year old boy.

In Minneapolis, the city council voted to abolish the police force entirely, although it is unclear how the measure is to be implemented. In Seattle, Mayor Jenny Durkan allowed anarchists to set up an “autonomous zone” known first as CHAZ, then as CHOP. “We could have the summer of love,” she said. What she got instead in CHOP was a 525% spike in crime, including “narcotics use and violent crime, including rape, robbery, assault, and increased gang activity”. Emergency response times tripled. Two teenagers were among those who were shot, some fatally.

One influential national politician, however, promised with a smile that the “protests” are “not going to stop…”

The situation in New York City was not helped by a vast deterioration in safety since a reform law went into effect on January 1, which eliminated bail for defendants accused of “low-level and nonviolent offenses.” After New York Police Department officials reported an increase in crime, however, the law was somewhat rolled back .

“[W]e won’t just rebuild this nation — we’ll transform it,” read one notable tweet by a leading national politician, neglecting to mention into what.

There has also been talk about slashing prison occupancy by more than 50%. Rafael A. Mangual, deputy director for legal policy at the Manhattan Institute, commented:

“Pursuing that sharp a reduction in incarceration would necessarily require releasing, or refusing to incarcerate, chronic, often violent, offenders who pose a significant risk to the public’s safety, particularly in communities already struggling with elevated crime levels, economic blight and other social problems.”

The corollary fear and insecurity generated by the urban crime and devastation has led to a surge in gun purchases. During the first six months of 2020, a record 10.3 million firearms were sold, according to a recent survey by the National Shooting Sports Foundation.

Some politicians are apparently planning to increase gun control and limit the rights of citizens to carry arms. Such politicians, according to their platform, “will enact universal background checks, end online sales of guns and ammunition… ban the manufacture and sale of assault weapons and high capacity magazines… incentivize states to enact licensing requirements for owning firearms…”

According to the National Rifle Association, these politicians will turn “the right to keep and bear arms into a privilege dependent on the whim of government bureaucrats”. The warning is a reflection of the founding of the United States of America, when citizens turned their guns against the ruling British. One could also point to modern Venezuela, where government officials first forbade the sale of guns “except to government officials”, and then turned the government’s guns on their citizens.

America could indeed be “transformed,” but if safe and successful cities keep being transformed into places of crime-ridden lawlessness, is that what Americans want?