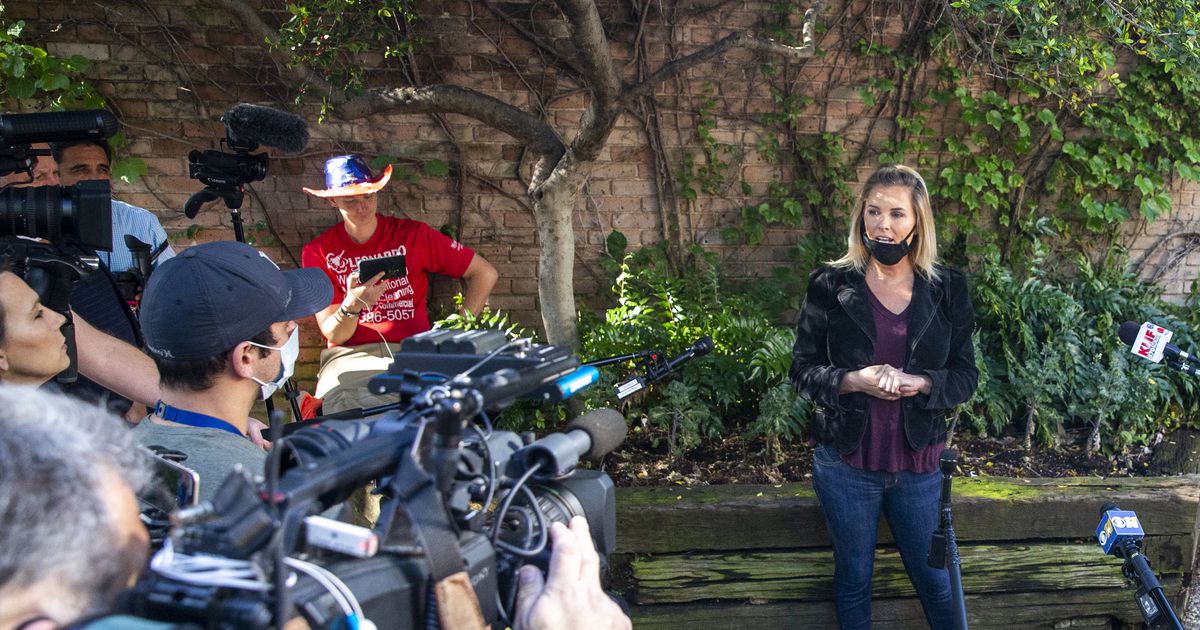 STEPHENVILLE — Metal chairs scraped the floor after Shelley Luther urged her audience to scoot closer. None of the roughly three dozen voters that came to see her Tuesday night wore a mask inside The Purple Goat restaurant. But that didn’t matter.

Luther, whose refusal to shutter her Dallas hair salon launched her into the national spotlight, has built her campaign for state Senate on defying COVID-19 shutdown orders.

She pitched herself to the crowd as a normal person like them, who would take their fight to Austin, even if it means going up against the state’s Republican leader.

“I’m embarrassed that we’ve been shut down that long, that our tyrant governor has embarrassed us completely,” she said.

The overt attacks on Gov. Greg Abbott — a relatively popular Republican who has largely avoided opposition from within his own party — signals a new chapter in the state’s GOP civil war.

Behind Luther is conservative mega donor Tim Dunn, who for years has targeted Republicans he and his associates deem insufficiently conservative.

She’s competing against five others, most notably Rep. Drew Springer, R-Muenster, who has raked in endorsements from dozens of fellow GOP lawmakers across the party spectrum, including one from the senator he seeks to replace.

“It’s a classic insurgent versus establishment campaign match-up,” said Brandon Rottinghaus, a political scientist at the University of Houston.

The pair leads the race for the solidly red North Texas senate district, which includes Sherman, Wichita Falls and Stephenville and parts of northern Collin and Denton counties.

Also in the running is Denton Mayor Chris Watts and a single Democrat, Jacob Minter, an electrician from Anna. The two other Republicans in the field are business owner Craig Carter of Nocona and software engineer Andy Hopper of Decatur.

The winner of the special election for Senate District 30 will replace outgoing state Sen. Pat Fallon, who is running for Congress. With low turnout expected — just about 35,000 voters have cast a ballot so far — the race could go into a runoff.

As the Sept. 29 election day draws near, the contest is growing increasingly contentious with Luther and Springer questioning the other’s Republican bona fides and airing their grievances in attack ads.

While Luther has staked out a number of conservative positions, Springer’s camp questions whether they are “true convictions” because she hasn’t voted in recent GOP primary elections.

Meanwhile, Luther’s allies argue Springer has not worked during his time in the Legislature to advance conservative policies like so-called “constitutional carry,” which he says is a priority.

The tight timeline Abbott set for the special election — that gives candidates roughly one month to woo voters — gives Springer an advantage. He already represents a portion of the mostly rural district in the Texas House.

But Springer is spending the final stretch of the hotly contested race in quarantine after his wife tested positive for COVID-19. A rotating cast of supporters has filled Springer’s seat at candidate forums, including Fallon, who was captured on video in a tense exchange with Luther last week.

“I never admitted to being a politician, but when it came down to who had the cojones when we were completely shut down and people were committing suicide, I stood up,” Luther said.

“So did I, and you know what I applaud you for what you did,” Fallon responded. “One two-day event is not going to make me want to vote for you for the senate.” 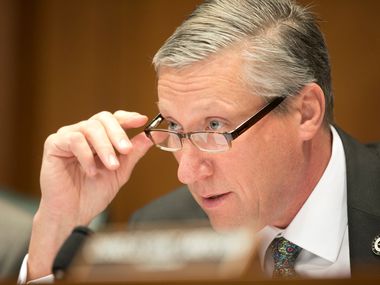 A former Spanish teacher who also fronts a band, Luther lives in Pilot Point and owns Salon à la Mode in Dallas. She was jailed for contempt of court after violating an order to close her salon during the coronavirus pandemic.

Before rising to national prominence, her social media pages largely featured before-and-after pictures of clients demonstrating her makeup skills and pictures of her two daughters and dogs, The Dallas Morning News has previously reported. Voting records show that over the last decade, Luther cast a ballot in presidential elections, but not primaries.

She touts her lack of past political experience as a benefit. “It’s like a badge, I’m not one of the good old boys,” she said. “I’m just one of the real authentic residents of Senate District 30.”

If she wins, Luther would come into the senate with a $1 million campaign debt to Dunn, an unusual arrangement that government watchdogs question how she will repay.

Aside from the loan, Luther’s campaign has raised about $141,000 to date, the majority of which came from a single donor, campaign finance records show. At a recent candidate forum, Luther said she has to pay back the loan if she wins, but not if she loses, according to a video clip from the event.

Dunn “knows I will represent you as the people, and that I can not be persuaded by people offering me money,” she said. Luther’s campaign did not respond to questions about the loan.

Luther has said her priorities include curbing Abbott’s power to close businesses without a special session, banning abortion and allowing people to carry concealed handguns without needing a license, a policy known as “constitutional carry.”

Among her most prominent supporters are Collin County Judge Chris Hill, who did not respond to a request for comment, and state Sen. Bob Hall, who is also a vocal critic of Abbott’s handling of coronavirus.

“I view her as someone who would be great competition to see who’s going to be the most conservative,” said Hall, R-Edgewood.

In contrast, Springer touts seven years in the Legislature and knowledge of the district as an asset, as do the legislators backing him.

“I work for my constituents and I have always done that,” he said. “I just think that makes me a good public servant.”

A financial planner who was raised in Parker County, Springer chairs the House committee on agriculture and livestock. Springer also previously worked for Dallas tax services firm Ryan, LLC while serving on a House tax committee, which raised questions about a potential conflict of interest that he has dismissed.

Next session, Springer said he wants to address how long a disaster declaration can last before a special legislative session is triggered. He has also named as top priorities, lowering property taxes, ensuring monuments cannot be taken down and letting people carry concealed handguns without needing a license. While the policy known as “constitutional carry” has been proposed several times in recent years, it has not gained much traction in the GOP-controlled Legislature.

In a recent video, outgoing state Rep. Jonathan Stickland, a Bedford Republican and tea party firebrand, accused Springer of refusing to help him advance the those bills over the last six years.

“We had one simple ask for him, sign on a co-sponsor to our bill,” Stickland said. “Every single time Rep. Springer said no.”

Springer said he doesn’t agree with Stickland’s approach to passing policy and just because he didn’t sign on as a co-author of the bill, doesn’t mean he does not support it.

“I have never not voted for a pro-Second Amendment bill, ever,” he said, adding that he has an endorsement from the National Rifle Association. 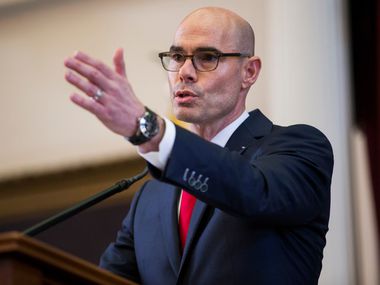 While Abbott has backed Springer in the past, the governor has not weighed in on the senate race yet, to some Republicans’ surprise. A spokesman for Abbott did not return a request for comment. Still, at least 30 of Springer’s GOP colleagues have endorsed him, including Rep. James Frank, R-Wichita Falls.

“It’s not easy to get things done in the Legislature and it does help to have some experience,” he said.

Watts, an attorney, is also running on his experience serving as mayor of Denton for the last six years. He’s laid out priorities that include ensuring funds for rural hospitals, curbing the governor’s emergency declaration laws and lowering property taxes.

“Dealing with the issues that come about with running a community have prepared me to expand that to the residents of (senate) District 30,” he said.

Minter, a Democrat, is campaigning on a platform of bringing civility to politics and providing affordable healthcare to rural areas.