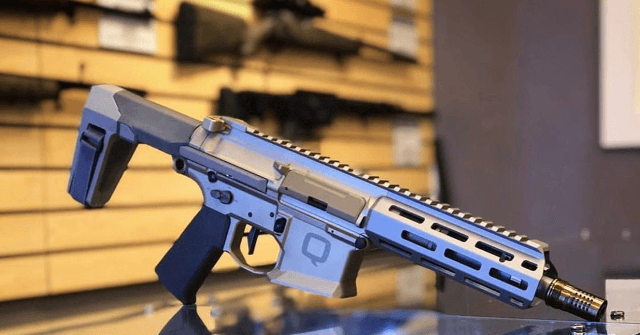 The Bureau of Alcohol, Tobacco, Firearms, and Explosives (ATF) recategorized a popular Q, LLC-manufactured AR-15 pistol with stabilizer brace as a Short Barreled Rifle (SBR), which places the gun under the purview of the National Firearms Act (1934).

As of now, the ATF’s action is limited to the Q, LLC (Q) manufactured AR-15 pistol called the “Honey Badger,” but an expansion of the policy, which would impact all AR-15 pistols with pistol braces, is anticipated.

Q, LLC sent an October 6, 2020, letter to customers who have previously purchased the pistol, saying:

On August 3, 2020, the Bureau of Alcohol, Tobacco, Firearms, and Explosives issued Q a formal Cease & Desist letter, notifying us that ATF has taken the position that the Q Honey Badger Pistol is a short-barreled rifle regulated under the National Firearms Act. In response, Q has ceased all production of the Honey Badger Pistol, and submitted a comprehensive letter to ATF and the Department of Justice stating why we disagree with this classification. Additionally, we have provided recommendations on how to address firearms already in circulation. Q is seeking solutions that best protect you, the individual, and Q’s distribution network from falling out of compliance with ATF regulations, and federal law. At this time, Q has not received and definite guidance from the ATF.

Q went on toe provide short term remedies owners of the Honey Badger Pistol might try to stay compliant, noting that violation could lead to “prosecution” with “a $10,000.00 fine and up to 10 years imprisonment.”

The NRA-ILA notes that the ATF’s recategorization of the Honey Badger Pistol marks a significant department from their prior policy, which has been in place since 2012, and which recognized pistol braces as stabilizing devices for firearms.

Sources note that the number of privately-owned AR-15 pistols with pistol braces could be in the millions.

Amy Coney Barrett and the Second Amendment: Why her “expansive view” is utter BS
Gun Violence Is A Problem In Texas. And No One’s Talking About It.
Summerfield to elect township leaders – News – Monroe News – Monroe, Michigan
Opinion | Trump is the greatest president in the modern era when it comes to shaping the judiciary
A letter to my neighbor, a churchgoing Trump supporter