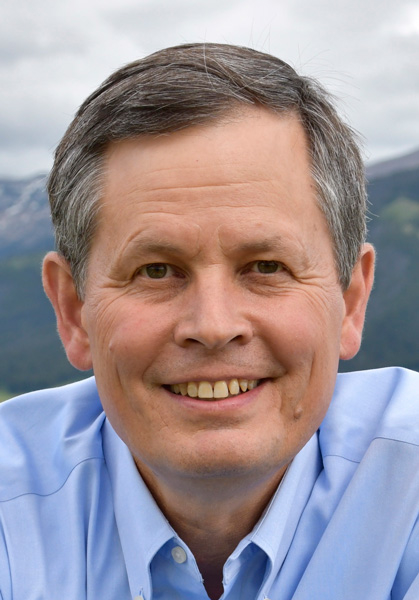 Sen. Steve Daines, R-Mont, faces Democratic Montana Gov. Steve Bullock, who cannot run for re-election to that office due to term limits, in in Daines bid for a second term in the U.S. Senate.

Daines, who is from Bozeman, said he has connections to north-central Montana. His great-great-grandmother settled 23 miles east of Conrad, he said.

“I think in many ways that I didn’t choose Montana, Montana got picked for me thanks to my great-great grandma and I feel lucky every day that I get to live in the greatest state, which is part of the greatest country,” Daines said.

Daines said he believes President Donald Trump has led the federal government well in how it has handled COVID-19.

“I appreciate the president’s leadership back in January where he was criticized for this, but he shut down flights from China in the United States and that likely saved thousands, thousands and thousands of lives,” Daines said. “The federal government has kept its focus on getting resources out to the states for personal protective equipment for testing, getting new therapeutic drugs that will reduce the mortality rate as well as developing a vaccine. Additionally, the help that has been provided to our small businesses that were at risk of shutting down and laying off employees, we passed the Paycheck Protection Program for Montana, helped about 24,000 small businesses and provided about $1.7 billion of help just for the state of Montana, and then, of course, helping those who lost their jobs of no fault to their own with the unemployment insurance additional benefits from the federal government.”

He said all of this was part of the CARES Act that passed in March and has been helping Montanans and Montana’s businesses, as well Montana frontline health care heroes and first responders.

Daines pushed for unemployment help; but has been criticized for opposing the additional $600 a week that was included in the package, saying it gave some people more benefits than they earned in their jobs.

He added that $1.25 billion was sent to the state of Montana to be used to distribute around the state to help communities and counties.

“I appreciated the fact there were not federal government mandates put in place that the federal government, and the president allowed the states to decide how they wanted to deal with issues like masks and so forth,” Daines said.

Daines received a degree in chemical engineering from Montana State University. Engineers are trained to solve problems, he said, adding that after he graduated he spent 28 years growing businesses, creating jobs and solving problems.

“That background has been helpful for me now as I’ve served in the U.S. Senate,” Daines said. “I was rated one of the most bipartisan and effective senators, and because I’m focused on getting results it brings a certain pragmatism to the job that brings Democrats and Republican together to actually get things done for Montana, and that’s something that I’m proud of, my record, and I’m humbly asking Montanans for their support for another six-year term.”

He said there are way too many attack ads running on both sides.

“I think that’s frankly a hypocritical position to take – (Bullock) opposed dark money until it benefited his campaign,” Daines said. “I’m being outspent by a significant amount – there’s far more money coming in for Steve Bullock then there is for our campaign, so we are going to be outspent.

” … I trust Montanans, though. Montanans will cut through all of these negative ads, all these radio ads, additional ads, and I’m confident Montana common sense will prevail and they’ll look at the actual results I’ve been able to deliver for Montana and protect their Montana way of life,” he added.

He said there are some differences between him and Bullock, including that Daines has an A+ rating from the National Rifle Association and Bullock has a F.

“I want to cut taxes, he wants to raise them,” Daines said. “I want to secure our borders and work with the president to do so, he supports sanctuary cities. I’m proudly pro-life, and he has taken the most radical position you can take on the issue of abortion and I stand with President Trump to protect our Montana way of life, and it was a year ago, (Sept. 28) he wanted to impeach and remove the president from office.

“So I think there’s some real differences between the two of us of what we stand for and what we would do in the next six years as the United States senator,” he added.

Daines said that the attack ad has been debunked by USA Today and independent fact check organizations.

“We did not outsource jobs,” he said. “What we did is we went there to market and sell American brands to beat Chinese brands, so it was all about marketing and selling in China. There was not a single job outsourced – this was about bringing great American brands like Crest toothpaste, Head and Shoulders shampoo, Tide laundry detergent to introduce those brands into the Chinese market.”

An attack ad against his opponent says Bullock awarded a contract to his brother’s company when the facts are that Bullock did not award the contract himself and his brother had left the company before Bullock was elected governor.

Daines said he is not responsible for that ad, it is no one his campaign is running but is coming from an outside source.

“We cannot coordinate with these outside groups, it’s illegal to do so,” he said.