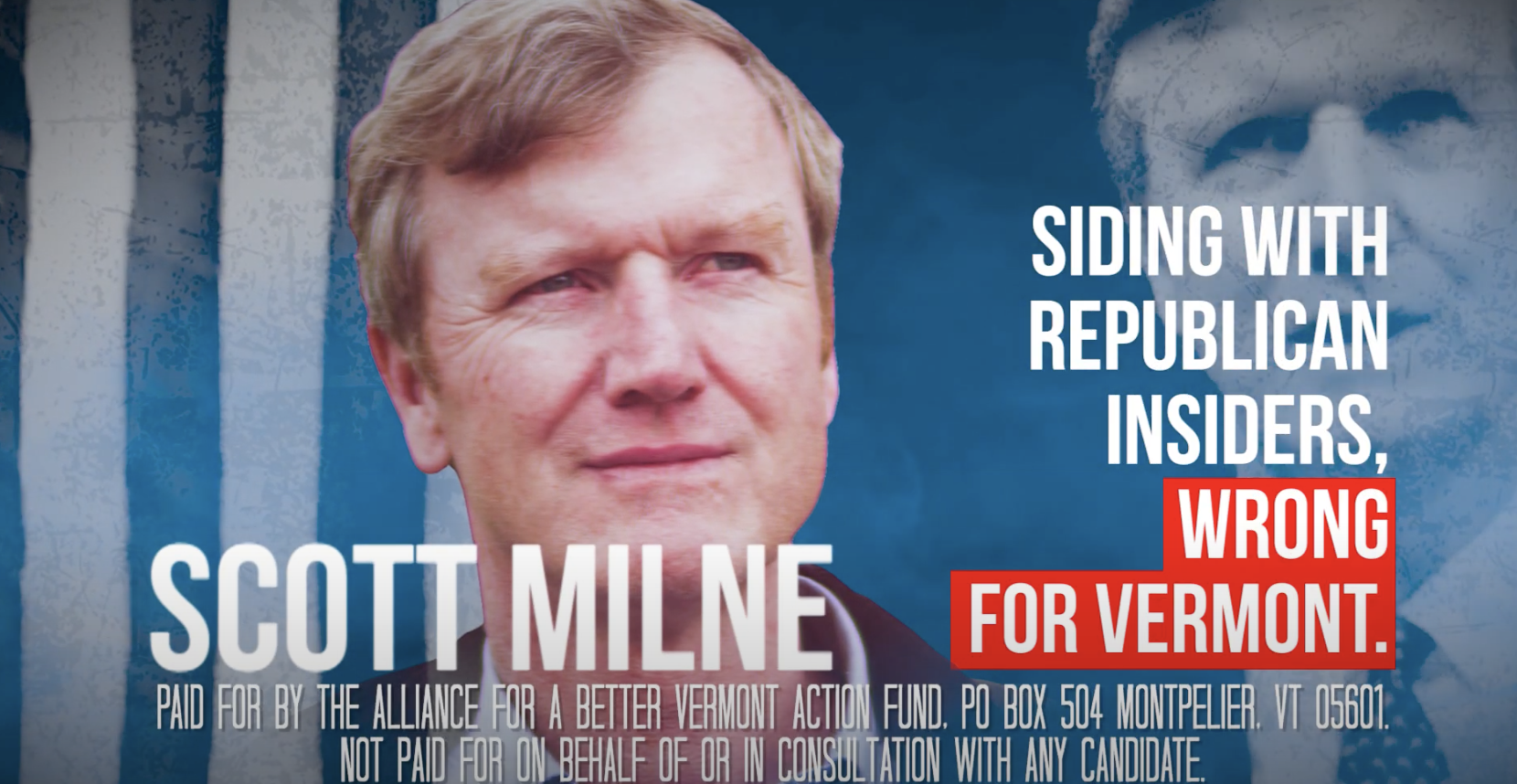 A super PAC that supports the Democratic candidate for lieutenant governor, Molly Gray, has released a television attack ad criticizing her opponent Scott Milne, for being backed by a national Republican organization funded by “corporate tobacco, the NRA, Koch brothers and Trump donors.”

The ad was funded by a PAC called the Alliance for a Better Vermont Action Fund, which spent $30,000 on the television advertisement, and is criticizing support Milne has received from the Republican State Leadership Committee.

In September, a PAC created by the Republican organization spent more than $200,000 on television advertisements for Milne. The organization has received funding from tobacco companies, the pharmaceutical industry and the National Rifle Association.

The ad also attacks Milne’s stance on abortion. It states that when he was asked during a debate last month about a measure to guarantee reproductive rights that Milne “declined to say.”

During that debate, the candidates were asked whether they support Proposal 5, the constitutional amendment that enshrines an individual’s right to reproductive health choice, in the state’s founding document.

While the House and the Senate both passed the amendment in 2019, both bodies are required to again vote on the constitutional change in the 2021-22 legislative biennium, before it can be sent out to voters as a ballot question.

Gray said that she unequivocally supports the constitutional change, while Milne would not say one way or the other whether he supports the amendment.

VTDigger is underwritten by:

“It lets Vermonters weigh in at the ballot box on a very important issue,” Milne said.

Following the debate, Milne clarified his stance on abortion.

“As I explicitly stated during the debate, I support a woman’s right to choose and have done so not only in this campaign but in previous ones as well. If Prop 5 reaches the ballot box, I would vote for it,” he said on Twitter.

Milne’s campaign also points to the fact that the Republican has a long record as a pro-choice candidate.

“First Molly Gray lied about her own record, and now she and her friends are lying about Scott Milne’s. Scott Milne is pro-choice,” Corey Parent, Milne’s campaign manager, said in response to the ad.

The Milne campaign has attacked Gray for saying that she doesn’t know anything about the Alliance for a Better Vermont Action Fund’s activities when it is connected to her “friends.”

It is a violation of campaign finance laws for political campaigns to coordinate with PACs.

The organization that is affiliated with the PAC, Alliance for a Better Vermont, was incorporated by Jake Perkinson, a lawyer and the former chair of the Vermont Democratic Party. Perkinson has provided the campaign with legal advice. (Perkinson is member of the board of trustees for the Vermont Journalism Trust, the parent company of VTDigger).

Lindsay DesLauriers, one of the 501(c)(4) group’s board members, and Perkinson hosted a meet and greet for Gray, and other Democratic candidates in the state, in July.

“The directors of the shady super PAC Molly Gray ‘knows nothing about’ hosted a meet and greet with her two months ago — well after the dark money PAC was formed,” Milne tweeted Friday.

The PAC itself was only formed by Ashley Moore, the executive director of Alliance for a Better Vermont, last month.

“It’s not a surprise that Milne’s team is trying to drum up drama where there isn’t any by conflating a 501c4 organization with a PAC,” Moore said in a statement.

“It’s clearly an intentional distraction from Milne’s lack of traction and resonance with voters, and it’s par for the course,” she added.

VTDigger is underwritten by:

Samantha Sheehan, Gray’s campaign manager, directed Perkinson to VTDigger on Friday. Perkinson said that he “filed the paperwork” for the original 501(c)(4) organization in 2018, but never did legal work for the group again and has had no involvement with the recently established PAC.

“Any suggestion that I coordinated between Molly Gray’s campaign and any PAC is unequivocally false, and any allegation to the contrary is reckless and unbecoming of any Vermonter,” Perkinson said.

The Milne camp has also called on Gray to tell the PAC to disclose its donors.

“Molly Gray should insist that this group run by her friends end its money laundering scheme and disclose its donors so Vermonters know who is paying for these false and misleading attacks,” Parent said in a statement.

Campaign finance filings only show that the PAC has received funding from the Alliance for a Better Vermont organization, and Win Vermont, another PAC.

Moore declined to provide details about the PAC’s funding aside from what’s already been reported.

“Like all political action committees and candidate committees in Vermont, our contributors are listed in our campaign finance reports and we comply with all reporting requirements,” Moore said.

Sheehan said that Gray didn’t have knowledge of the PAC until Milne discussed it in a press release this week.

“We haven’t had any correspondence with them and weren’t aware of the work that they were doing in any way,” Sheehan said.

“I will continue, as I have throughout this campaign, to focus on the issues facing Vermonters and a positive, bold, vision for the future of our state. I have not and will not engage with this organization, any questions about their actions need to go to them,” she said.

Missing out on the latest scoop? Sign up here to get a weekly email with all of VTDigger’s reporting on politics. And in case you can’t get enough of the Statehouse, sign up for Final Reading for a rundown on the day’s news in the Legislature.