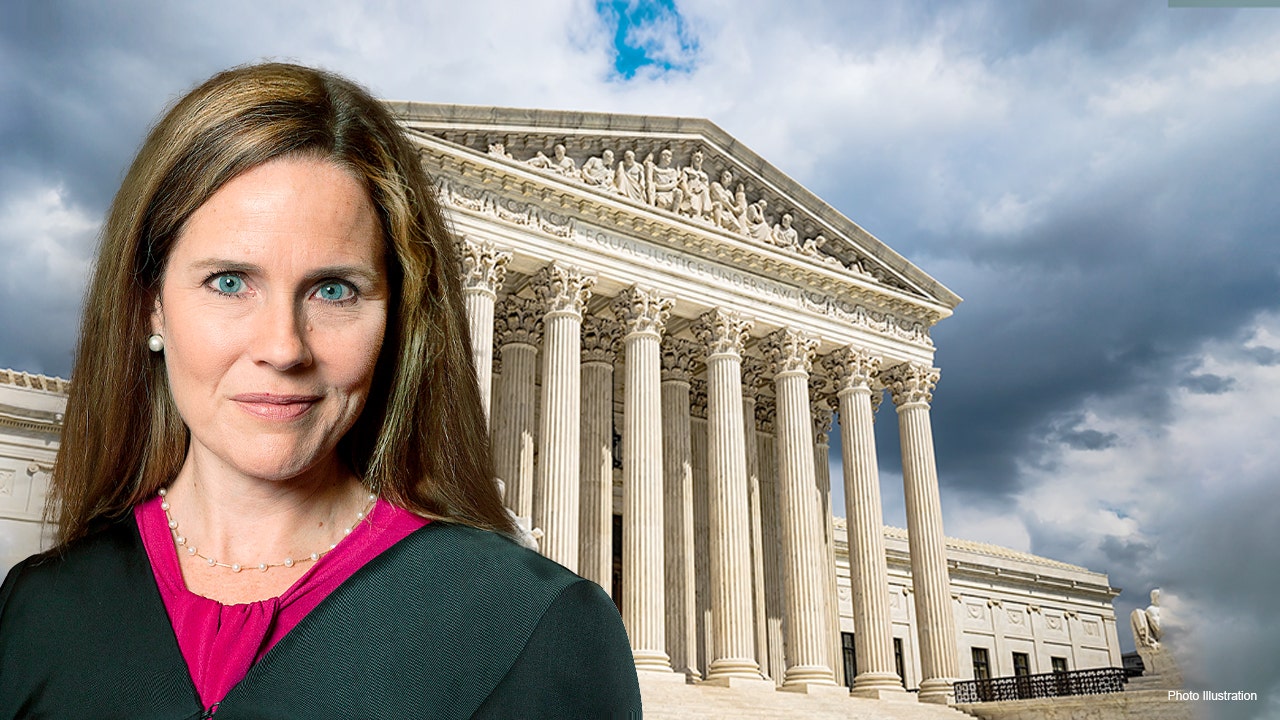 The confirmation hearing for Amy Coney Barrett, President Trump’s pick for the Supreme Court, will kick off Monday, where she’s expected to be grilled on several hot-button issues that would have a far-reaching impact.

Supreme Court nominees routinely won’t say how they’ll rule on particular issues to prevent prejudging a potential case, but lawmakers on the Senate Judiciary Committee are expected to target her past writings and statements — and press Barrett on how those past communications might impact her judicial thinking on such issues as abortion, gun ownership, health care and more.

Unlike Trump’s previous two nominees — Justices Neil Gorsuch and Brett Kavanaugh, who replaced conservative-leaning justices — Barrett’s ascension to the court would have a big ideological impact because she would succeed liberal icon Justice Ruth Bader Ginsburg, who died Sept. 18 at age 87.

Barrett’s addition to the bench would forge a 6-3 conservative majority on a Supreme Court that for decades has had a 5-4 conservative edge, which liberals could occasionally upend by attracting a vote from across the ideological divide.

Democrats have opposed Barrett because of the timing of nomination — just weeks before the presidential election — and because they believe she would vote against their political priorities, including the Affordable Care Act and abortion access.

Meanwhile, Republicans have touted Barrett’s qualifications for the job, her practice of honoring the original meaning of the Constitution, and her judicial likeless to a conservative hero, the late Justice Antonin Scalia, for whom Barrett clerked and considers a mentor.

Here’s a look at the top issues that will be in the spotlight during Barrett’s hearing.

Judge Amy Coney Barrett speaks after President Donald Trump announced Barrett as his nominee to the Supreme Court, in the Rose Garden at the White House, Saturday, Sept. 26, 2020, in Washington. (Associated Press)

Anti-abortion groups have championed Barrett’s nomination, while pro-choice activists have fiercely opposed her — both believing she could be a vote to overturn or chip away at Roe v. Wade, the landmark 1973 case that gave women a legal right to terminate a pregnancy.

Barrett, a Roman Catholic, has been actively pro-life in her personal life, signing onto a two-page ad in 2006 to oppose abortion that called Roe v. Wade’s legacy “barbaric” and declared life begins at “fertilization.”

And in new documents disclosed late Friday that Barrett turned over to the Senate Judiciary Committee, Barrett joined fellow pro-life faculty at the University of Notre Dame in signing a 2013 newspaper advertisement to oppose the “infamous” Roe v. Wade ruling and to “call for the unborn to be protected in law and welcomed in life.”

As a jurist on the Seventh Circuit Court of Appeals for just under three years, Barrett has encountered only a few abortion cases.

In one 2018 case, the Seventh Circuit affirmed a lower court decision to strike down an Indiana law, signed by then-Gov. Mike Pence, that would have outlawed abortions that were based on the race, sex or disability of the fetus and would require the dignified disposal of human fetal remains. Barrett disagreed and joined with the dissent, written by Judge Frank Easterbrook, that viewed the Indiana statute as “an anti-eugenics law.”

The case went to the Supreme Court which in 2019 issued orders with mixed results — allowing the fetal tissue disposal portion of the Indiana law to take effect but not allowing Indiana to enact the new abortion restrictions on race, sex or disability.

While Trump has previously pledged he’d appoint only “pro-life judges,” the White House has insisted Barrett would apply the law and not her personal beliefs.

“The president has been clear that he would never ask a judge to prejudge a case,” White House press secretary Kayleigh McEnany said. “Judge Amy Coney Barrett has on multiple occasions said it is never appropriate for a judge to impose that judge’s personal convictions whether they derive from faith or anywhere else in the law.”

The Affordable Care Act, also known as ObamaCare, will be front-and-center during Barrett’s confirmation hearing because the Supreme Court is slated to hear a challenge to the Obama-era health care law on Nov. 10 in a case known as California v. Texas.

If Barrett is confirmed before Nov. 3 — the goal of Senate Republicans — she could potentially be in place to hear the case and determine the survival of the health law that was designed to decrease the number of uninsured people in America, in part, by requiring that almost everyone have insurance.

A coalition of red states aims to invalidate the ACA on the grounds that this individual mandate — which was upheld by the Supreme Court previously as a tax — is now unconstitutional because Congress eliminated the financial penalty associated with not purchasing health insurance.

They say this makes it impossible to read the ACA as a tax anymore, so it is now simply an unconstitutional government mandate to purchase a certain product. The Trump administration is backing the red states’ position in the lawsuit.

Democrats believe Barrett would vote against the Affordable Care Act because her mentor, Scalia, did twice before. At the White House nominating ceremony Sept. 26, Barrett made a point to say she shares the same philosophy as Scalia that a judge must apply the law as written and not make policy.

“His judicial philosophy is mine too,” Barrett said.

She publicly sided with the dissent, written by Scalia, in another Supreme Court case that upheld ObamaCare, known as King v. Burwell.

“The dissent has the better of the legal argument,” Barrett said in an NPR interview after the ruling.

Gun rights groups like the National Rifle Association and Gun Owners of America have expressed support for Barrett, while gun control advocates have opposed her nomination, viewing her as an opponent to laws that restrict gun ownership.

Unlike health care, Barrett does have a record on guns from the Seventh Court that has informed her critics and supporters’ opinions on how she views infringements on the Second Amendment constitutional right to bear arms.

WHERE DOES JUDGE AMY CONEY BARRETT STAND ON THE SECOND AMENDMENT?

In the 2019 gun-rights case Kanter v. Barr, Barrett wrote a dissenting opinion that argued that a conviction for a nonviolent felony — in this case, mail fraud — shouldn’t automatically disqualify someone from owning a gun. She said the government had failed to introduce data “to show that disarming all nonviolent felons substantially advances its interest in keeping the public safe.”

In that same opinion, she also reaffirmed that states can take away voting rights from felons.

Barrett wrote that “the Second Amendment confers an individual right, intimately connected with the natural right of self defense, and not limited to civic participation.”

Democrats wanting stricter gun control legislation in the wake of America’s painful history of mass shootings have come out strongly against Barrett based, in part, on this opinion.

“Amy Coney Barrett is a radical,” said Sen. Chris Murphy, D-Conn. “She is seeking a position on the Supreme Court to legislate her radical views into existence, and when 90% of Americans want felons to be kept from buying guns, it is unfathomable that we would consider putting somebody on the Court who is going to strike down that restriction.”

President Donald Trump walks along the Colonnade with Judge Amy Coney Barrett after a news conference to announce Barrett as his nominee to the Supreme Court, in the Rose Garden at the White House, Sept. 26, 2020, in Washington. (Associated Press)

But Republicans have praised Barrett as a principled constitutionalist and a brilliant jurist.

Barrett wrote a unanimous three-judge panel decision in 2019 making it easier for men alleged to have committed sexual assaults on campus to challenge the proceedings against them.

The case, Doe v. Purdue University, involved a student who had been found guilty of sexual violence by Purdue University’s disciplinary system, suspended for an academic year and lost out on his ROTC scholarship. The student, known as John Doe, sued and alleged sex discrimination.

Barrett sided with the male student and questioned how the university came to favor the female student, known as Jane Doe.

“In a case that boiled down to a ‘he said/she said’ it is particularly concerning that [the university] concluded that Jane was the more credible witness — in fact, that she was credible at all — without ever speaking to her in person,” Barrett wrote.

She wrote: “Purdue’s process fell short of what even a high school must provide to a student facing a days-long suspension.”

Barrett has handled a few immigration cases on the Seventh Circuit Court, including one where she sided with the Trump administration in a dissent.

In June 2020, a three-judge panel on the Seventh Circuit upheld an order blocking a new Trump immigration rule from being enforced. The so-called “public charge” rule allows immigration officials to deny green cards to legal immigrants over their use of public benefits.

But Barrett dissented in the case, Cook County v. Wolf, and wrote that while critics have considered the public charge definition “too harsh,” the “same can be said” of laws passed by Congress.

“Litigation is not the vehicle for resolving policy disputes,” Barrett wrote. “Because I think that [the Department of Homeland Security’s] definition is a reasonable interpretation of the statutory term ‘public charge.’ I respectfully dissent.”

If confirmed, Barrett, 48, would become the fifth woman to earn a lifetime appointment to the Supreme Court and would cement its conservative tilt.

Brian Kemp Slams Stacey Abrams for Something She Didn’t Do — but He Did
ILA | When Seconds Count, the Police are Only Hours Away
New York gun bans alarm residents of upstate bear country | U.S. & World
Opinion | How many nutty stances can the Republican Party take?
‘She Doesn’t Tell Us the Truth’