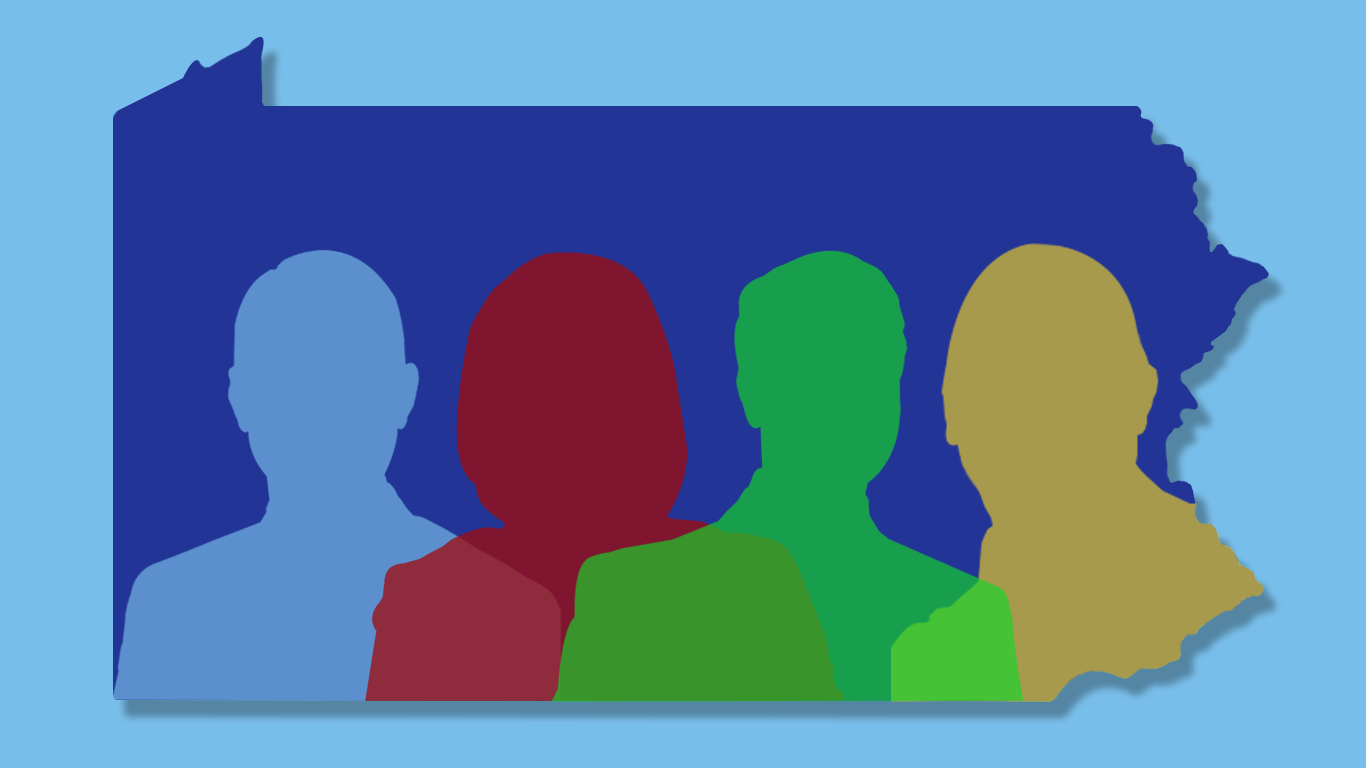 In a relatively quiet race that has turned its focus on the issues of drug policy, gun violence and student loans, four candidates are vying to be elected as Pennsylvania’s attorney general on Nov. 3.

Attorney General Josh Shapiro, a Democrat elected in 2016, is fighting for a second term and faces challenges from candidates like Heather Heidelbaugh, a Republican trial lawyer from Pittsburgh.

Here is what the candidates say about the race and higher education, mental health and the role of government in society.

Shapiro is running for re-election on a platform emphasizing his commitment to civil rights, marijuana legalization and reproductive rights, highlighted by his involvement in a joint suit against United States President Donald Trump administration’s gag rule that prevents health professionals from referring patients to abortion services.

Shapiro is concerned about the impact of the COVID-19 pandemic on Black and Brown communities, he said.

“We’ve seen laid bare the inequities in our system, and how poor communities, Black and Brown communities have really felt the brunt of this crisis both on the health side, and the economic side,” Shapiro said.

Shapiro’s office worked with the office of Philadelphia District Attorney Larry Krasner to launch the Gun Violence Task Force in 2019, according to the attorney general website.

“We’ve got to continue to prioritize public safety, all across Philadelphia,” Shapiro said. “But especially in North Philadelphia where the gun violence epidemic is out of control.”

Shapiro believes the task force has been successful in the past year in combating gun trafficking by increasing the amount of crime gun data that law enforcement agencies share with one another, he said in a release about the task force’s annual report this year. However, gun violence is continuing to surge in Philadelphia, with the Philadelphia Police Department reporting more than 1,700 shootings in the city this year, the highest yearly total since 2015.

Regarding student debt, Shapiro sued loan servicing company Navient Corporation and its subsidiary, Navient Solutions LLC., in 2017 for predatory lending, including $4 billion in interest charges between 2010 and 2015, according to the attorney general website.

Shapiro won an interim victory in the case on July 28 when the U.S. Third Circuit Court of Appeals ruled that individual borrowers and states could sue Navient. Navient had previously argued that federal law blocked this, the Philadelphia Inquirer reported.

Shapiro also sued the for-profit cosmetology school American Beauty Academy Lancaster after it permanently shut down without properly notifying its students. This resulted in the school opening a 60-day window for former students to file claims and see if they were eligible to receive recompensation for the money they paid the school, according to the attorney general website.

Shapiro recently filed lawsuits against the U.S. Postal Service in response to Postmaster General Louis DeJoy’s implementation of operational changes, like limiting staff overtime and extra shifts. Shapiro believes these changes have impacted the “prompt” delivery of mail to Pennsylvanians, including their mail-in ballots, by delaying the distribution of “letters, paychecks or bills,” according to his website.

“I am in court right now defending against the attacks by the president, and trying to make it a smooth process for you to vote,” Shapiro said.

Shapiro said he will continue to battle the state’s opioid crisis, prosecute fracking companies for environmental violations and pursue further litigation against predatory lenders if reelected, according to his website.

Heather Heidelbaugh, the Republican challenger, is a partner at Leech Tishman Fuscaldo and Lampl LLC and has experience in trial law and litigation for “businesses and individuals,” according to the firm’s website.

Before running for attorney general, Heidelbaugh was also a member of the Allegheny County Council.

“My platform is to protect all Pennsylvanians,” she said.

Heidelbaugh said she has become increasingly concerned about how society treats those with mental illnesses, citing homelessness, jail suicides and the inability of police officers to deal with mental health related emergencies.

A 2018 study by the Brain and Behavior Research Foundation, a nonprofit organization that funds research on psychiatric and mental illnesses, found that the primary cause of homelessness for individuals with mental illnesses is poverty and a lack of affordable housing options.

If elected attorney general, Heidelbaugh would convene a commission composed of health advocates, psychiatrists, psychologists, correctional officers and teachers to examine the needs of those dealing with mental illness, she said.

Heidelbaugh is against criminalizing drug addiction, but opposes Safehouse, an organization seeking to create a supervised injection site in Philadelphia. U.S. District Judge Gerald McHugh approved Safehouse’s plans to open a site in South Philadelphia in February, but McHugh suspended his approval in June after saying it was not the right time for something new, Billy Penn reported.

“These are extremely complex issues, based on where [safe injection sites] are going to be in the community, the furtherance of having addicts take drugs instead of healing,” Heidelbaugh said.

Regarding student loans, Heidelbaugh said that if elected, she would look into any pending lawsuits against student loan companies and decide if the cases possess the validity and factual evidence to continue.

She has also been endorsed by Firearms Owners Against Crime, the National Rifle Association and the Susan B. Anthony List, according to VoteSmart, a nonpartisan voter information site.

Richard Weiss was born and raised in Pittsburgh and has provided legal counsel for the U.S. Agency for International Development as well as for firms in his hometown of Pittsburgh and overseas in Jakarta, Indonesia.

Weiss said he is “not really a politician,” but felt obliged to run in light of the country’s ongoing protests against police violence.

“I was a little, at first, impressed when I looked at [Josh Shapiro’s] webpage when he made a statement about George Floyd, a very strongly worded statement,” Weiss said. “It sounded good, but then I didn’t see that any action was taken. In Pennsylvania, we have similar problems. It’s not something that just happened somewhere else, it’s everywhere, and it’s here too.”

“I know that some Libertarians believe that all drugs should be completely decriminalized,” Weiss said. “I don’t believe that. I pick and choose, you could say.”

If elected, Weiss would not seek charges in cases involving nonviolent drug crimes and sex work where possible, and would work to minimize the amount of cash bail set by judges, he said.

A longtime attorney and adjunct professor at Bucks County Community College, Daniel Wassmer is running on a platform of opposing what he views as an overbearing legal system, he said.

“We need to start with whittling out and reducing the number of laws in this country,” Wassmer said. “We don’t even live in a free country anymore. I mean, it’s complete and utter absurdity.”

Wassmer considers most laws restricting drug use and gun ownership to be examples of governmental overreach and believes statutes surrounding both issues should be loosened, he said.

Wassmer criticized those who he views as state and national political elites for the way the decriminalization of marijuana for medical or personal use has progressed, which he said has benefitted some Pennsylvanians more than others. Pennsylvania allows use of marijuana for medical reasons on the state level, but requires that it be purchased from licensed dispensaries.

“They’ve given out dispensary licenses to wealthy people,” Wassmer said. “And then they’re taking people in less affluent neighborhoods like Kensington and busting people who are essentially selling the same stuff, drugs, whatever, and they’re putting them in jail. That’s not even vaguely equitable.”

Tucker Carlson: Yes, the election was rigged for Joe Biden. Here’s how
Tucker Carlson outlines the post-Trump playbook
The Trailer: A liberal on how he won in a Trump district
NRA tax filing alleges Wayne LaPierre used the group’s funds for ‘personal benefit and enrichment’: report – Raw Story
Tucker Carlson claims 2020 election was ‘rigged against Trump in plain view’