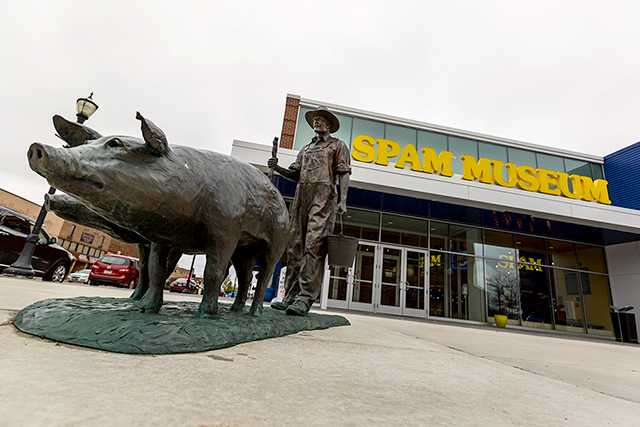 The state Senate district that includes Austin and Albert Lea is one of a handful in Greater Minnesota that Republicans don’t control, and flipping the seat away from DFL Sen. Dan Sparks would help the GOP maintain a slim 35-32 majority in the upper chamber in an election with few battleground races.

But the party has a puzzle to solve: How can it convince voters that split tickets between Republicans and Democrats to vote down ballot for the GOP?

Senate District 27 picked Donald Trump for president in 2016 by a 14-point margin, but Sparks beat Republican Gene Dornink that year by more than 9 points — a roughly 24-point swing that is unparalleled among other competitive races this year.

Republicans have drawn attention to policing, accusing Sparks of allying with people who want to defund law enforcement. While Sparks says he doesn’t support dismantling or defunding police, the “law and order”-style attacks have been a central theme of the GOP’s election efforts across Minnesota in 2020.

Dornink, who is running for a second time, is also highlighting his history as a longtime union carpenter who now owns a small business. There is a history of success for similar Republican candidates.

In 2019, state Sen. Jason Rarick of Brook Park, who is a master electrician, won a seat away from Democrats, while Sen. Michael Goggin of Red Wing, a project manager at the Prairie Island Nuclear Power Plant, unseated a DFLer in 2016.

While Dornink hasn’t won many labor endorsements, he is backed by the North Central States Regional Council of Carpenters. Adam Duininck, their government affairs director, said Dornink “understands our issues and will prove to be a strong supporter, the same way that Sen. Goggin or Sen. Rarick or other people around the Capitol that have that trades experience have shown.”

Senate District 27 is one of just six districts in Minnesota that Trump led in 2016 but is held by a Democrat. Trump’s 14-point lead in SD 27 was the second-highest margin in that group. In 2018, Republican candidates for secretary of state, auditor and attorney general also picked up more SD 27 votes than DFLers.

But Sparks was not the only Democrat to have success in the district. In 2018, Gov. Tim Walz, U.S. Sen. Tina Smith and Dan Feehan, the DFL candidate for U.S. House, won slightly more votes in SD27 than their GOP opponents.

Another sign of the district’s split: One Democrat and one Republican represent it in the state House. SD 27 borders Iowa and has major agriculture, meatpacking and health care industries.

Sparks, an insurance salesman, was first elected in 2002 and is serving his fifth term in the state Senate. He is considered one of the more conservative Democrats in the upper chamber, breaking at times with DFLers on issues like Walz’s efforts to mandate carbon-free energy by 2050 and implement tougher auto emissions standards that mirror ones in California. Sparks was endorsed by the National Rifle Association and has an “A” rating from the group. (Dornink is an NRA member who has an “A” rating based on questionnaire answers given to the group.)

As of 2019, Sparks was tied for the highest lifetime voting record of a sitting DFL senator by the American Conservative Union Foundation. His 2019 score was 0 percent, however.

At the Capitol, Sparks serves as the top DFLer on the Senate’s Commerce and Consumer Protection Finance and Policy Committee. When Democrats had a majority in the Senate, Sparks chaired the Jobs, Agriculture and Rural Development Committee from 2013-2017.

Dornink, who lives in Hayfield, was raised on a dairy farm and was a union carpenter for 22 years. After being laid off in 2009 during the Great Recession, he started his own business. His website includes pledges to oppose abortion and promote small businesses, and Dornink’s lively Facebook page features regular videos explaining his views on everything from opposition to new taxes to frustration with “omnibus” bills at the Capitol.

Tyler Becvar, a candidate for the Legal Marijuana Now party, is also on the ballot. The Minnesota Reformer reported Becvar posted a video supporting Dornink in late May and could be running as a spoiler candidate to take votes from Democrats, though LMN has since endorsed him.

Conservative groups hope the campaign turns on policing and labor

In a recent (remote) forum moderated by KSMQ Public Television, the two candidates sparred over health care, the governor’s emergency powers, and how best to handle a state budget deficit in 2021.

Sparks has voted to uphold Walz’s powers, saying they’re necessary when lawmakers can’t act quickly enough to address a fast-moving crisis; he says he wants more health insurance competition in rural Minnesota and is open to an expansion of MinnesotaCare, a state-run health care program for low-income people; and says his experience at the Capitol handling tough budgets will help the state better navigate a shortfall.

Dornink praised Walz’s actions over the first two months of the pandemic, but said the Legislature needs a larger role now; he said the region needs more health insurance options but can reach that goal in part by going “back to what we had” before the federal Affordable Care Act; and said the Legislature needs to “tighten their budget,” separate “wants from needs” and use audits and oversight to reduce wasteful or fraudulent spending.

Dornink and the campaign arm of Senate Republicans have focused mostly on policing in their flood of advertisements.

Dornink, for instance, often touts his endorsement from the Minnesota Police and Peace Officers Association, which backed Sparks in 2016. Leslie Rosedahl, a spokeswoman for the association, said Dornink is a “strong supporter of public safety and law enforcement and will keep communities safe.” She also criticized Sparks for opposing new penalties for people who protest on highways and promoting “alternatives to policing.”

Democrats proposed legislation that would create an Office of Community-led Public Safety Coordination to promote “alternatives to traditional policing models,” though it ultimately didn’t pass. Sparks said he doesn’t think the Legislature needs additional police reform laws after a compromise bill was approved earlier this year. In lieu of the MPPOA endorsement, Sparks has run his own campaign ads highlighting the endorsement of a retired Austin police officer.

Another campaign theme is Dornink’s union experience. Dornink’s website bills him as a “builder,” and an October advertisement from the Freedom Club State PAC, which is associated with conservative donors and activists Bob and Joan Cummins, praises Dornink as a police-endorsed blue-collar carpenter. Actors refer to Dornink as “that union guy” who will “stand up to the violence and keep it out of Albert Lea.”

Duininck said the carpenters’ council liked that Dornink is a carpenter, opposes “right to work” laws that ban unions from requiring everyone in a workplace be a member, and supports prevailing wage laws that ensure workers on state-funded projects are paid similarly to what they would make on other jobs.

It’s not that Sparks holds clashing opinions. Duininck said his union tries to endorse people in both parties to reduce partisanship on their key issues. He also said his members are more politically split, meaning party-line endorsements would cause frustration.

Still, Sparks was endorsed by the Minnesota chapter of the Laborers’ International Union of North America, the Minnesota AFL-CIO and its local affiliate. He was also endorsed by the Minnesota Nurses Association, Teamsters Joint Council 32 and Education Minnesota. Kris Fredson, director of public affairs for the local LIUNA group, said Sparks supported the bonding bill, a package of publicly funded construction projects, prevailing wage laws, voted for a new law aimed at reducing wage theft, and more.

Bill McCarthy, president of the Minnesota AFL-CIO, said in a prepared statement that Sparks has “long supported working Minnesotans’ priorities and protected our freedom to join together to negotiate a fair return on our work.”

The local United Food and Commercial Workers Local 9, which represents many Hormel employees, has not made an endorsement, Sparks said.

During the campaign, Sparks has focused on his experience in government, his independent streak and his own ties to agriculture and labor. Sparks worked on his grandparents’ family farm growing up and spent six years on the production line as a union Hormel employee. The campaign arm of Senate Democrats has portrayed Sparks as someone who will bring jobs manufacturing medical supply and personal protective equipment jobs to Minnesota.

“I think now more than ever we need a strong, experienced leader with the demonstrated ability to work with both Democrats and Republicans to tackle problems head on and get things done,” Sparks said in an interview Monday.

So far, negative ads run against Dornink by Senate Democrats have largely criticized the Republican for $600 in donations made to Roy Moore, a Republican who lost a race for U.S. Senate in Alabama in 2017. One of Dornink’s three donations was received by Moore shortly after a series of accusations that Moore sexually assaulted or pursued girls as young as 14.

Federal campaign finance data show the Moore contributions were unusual for Dornink. Before the 2017 spending, Dornink had given money three times this decade: twice to the Republican Party of Minnesota in 2012 and once to GOP congressional candidate Allen Quist in 2012. (The federal reports do not count donations in local Minnesota elections.) Since the donations to Moore, Dornink has given twice to Jim Newberger’s 2018 run for U.S. Senate in Minnesota, once to U.S. Rep. Jim Hagedorn in 2018 and once in 2020 to the Trump campaign. Dornink donated more money to Moore than to any other federal candidate or group.

Dornink, who declined interview requests, saying he was focused on meeting voters in the campaign’s remaining days, did not comment on the donations.

Overall, more than $650,000 has been spent by outside groups and political parties on independent expenditures in the race, the second most of any legislative district with an incumbent Democrat. A victory for Republicans in SD 27 would serve as a backstop to hold a Senate majority if any of their incumbents lose Nov. 3.

“I have a strong ag background, being in the union, very pro-labor, and then being a small business owner, I fit the district really well,” Dornink said in the KSMQ forum.