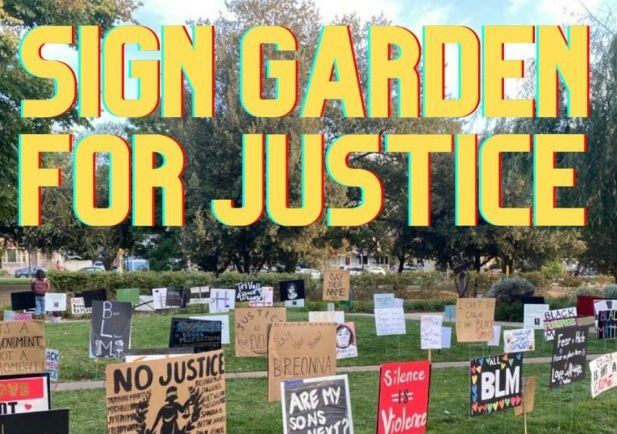 The gun dealer has since apologized for and taken down his posts with a picture of the teen, with messages like “bring your vests and helmets” and “get ready for a fun couple hours.”

Above we see an image from the flyer for the permitted Sunday afternoon event Sign Garden for Justice, wherein the Alameda County Black Lives Matter organization Tri-Valley for Black Lives will take to the Dublin Civic Center, place BLM-inspired signs on the lawn, listen to speakers, and then take their signs and go home. They have done a couple of these events in the last month or so, and they’ve gone off peacefully and without incident.

This Sunday’s event, though, has been roiled by an incident a week before the event. KRON4 reports on a series of threatening social media posts from a gun dealer, including one calling out a 17-year-old Dublin High senior.

Firearms proprietor Mike Grant has since deleted the post, but the BLM group saved screenshots. The messages are far too riddled with typos for us to (sic) each misspelling, but one decries how “black lives matter thugs” are planning a protest, and calls on “Oath Keepers, 3%, NRA and second Amendment members let gather at City Hall Parking Lot in Dublin on Sunday and get ready for a Fun couple hours. Oath Keepers please bring your vests and helmets in case these BLM people start trouble.”

Another posted the teen’s image, with the message “Patriots This is the Tri-Valley BLM leader. A Dublin High School kid.” That post reportedly had 29 shares before its deletion, and again, this is a minor we’re talking about here.

That minor has spoken out. “He actually referred to us as thugs,” the teen Denel McMahan told NBC Bay Area. “He got 29 shares that made me very nervous because some 30 people were feeling like this, that means 30 people potentially threatening me.”

His mother, understandably, is also rattled. “You’re essentially putting a target on my kid’s back,” Dawn McMahan said to the Mercury News. “As a mother, my son’s safety has been compromised.”

Sunday’s event, meanwhile, is still on, though Danville San Ramon says there will be additional security.

How to avoid an avalanche — and ruin a date
ILA | Ohio: 2023 Legislative Session Convenes Today
Understanding the Pistol Brace Rule, While Vets File a Petition Against Biden’s Administration
Illinois Sheriffs Refuse to Enforce the State’s New Gun Law
Newsom Attacks DeSantis for Gun Bill, Then Father of Shooting Victim Gives Him Awakening: ‘Sit This One Out’