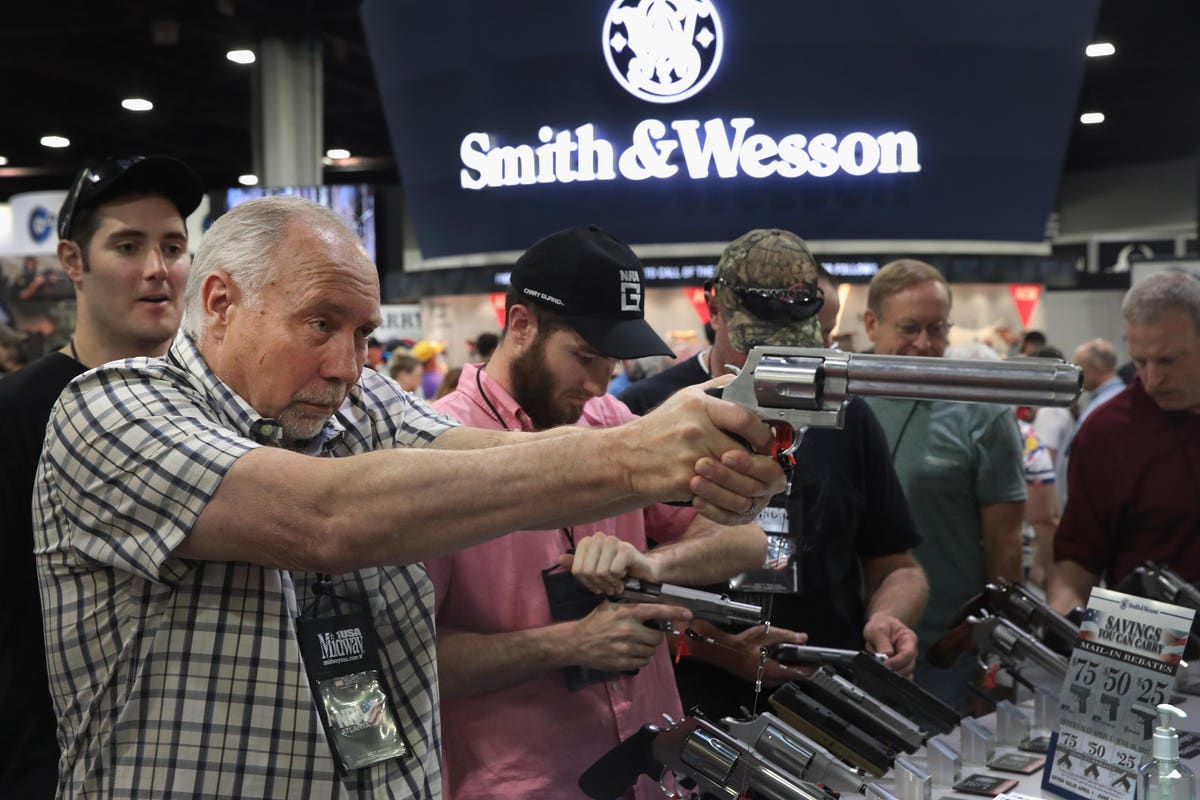 Smith & Wesson on Thursday reported major upticks in sales and profit during the quarter leading up to the election of President-elect Joseph Biden.

It was the second consecutive record-breaking quarter for the 168-year-old company, Chief Executive Officer Mark Smith said in an earnings call.

Smith said that booming sales are being fueled by new buyers, including African-Americans as the fastest growing demographic of gun owners. He said that politics has been a big driver this year. The most recent quarter ended just days before the election of Biden, a Democrat who owns guns. Biden is planning an aggressive gun control policy which includes a ban on the manufacture of tactical-style semiautomatic rifles for civilian consumers.

“There is a fear of gun control regulation which drives a lot of our consumers to go out and buy firearms,” said Smith.

The semiautomatic rifles are commonly referred to as assault weapons, though the industry prefers to call them modern sporting rifles. They include the popular AR-15s made by many gun companies including Smith & Wesson’s M&P 15.

“Consumer demand has picked up in recent weeks driven by heightened consumer fears over tightened gun control legislation under a Biden administration,” said Rommel Dionisio, gun industry analyst for Aegis Capital. “They noted sales of modern sporting rifles have accelerated recently, which is likely a response to the campaign promises by Biden to ban future sales of this type of firearm.”

Gun sales have been surging ever since March, when the coronavirus pandemic swept through America, closing schools and restaurants and restricting activity in major cities. Covid-19 has infected more than 14 million Americans and more than 275,000 of them have died, according to data from Johns Hopkins University. The pandemic caused the economy to flatten during the spring and summer, putting tens of millions of Americans out of work.

Smith said the company “created and filled” 287 jobs “during these extremely difficult times when so many of our fellow Americans are out of work.” The company employs more than 2,000 workers.

Concerns over coronavirus, the economy and civil unrest have all fueled gun sales. The Federal Bureau of Investigation said it conducted more than 35.75 million background checks through November of this year, easily exceeding last year’s record tally of 28.36 million for all of 2019. The FBI conducts background checks for gun purchases by federally licensed dealers, which includes all gun shops, and the data serves as the closest nationwide proxy to gun sales.

Smith attributed the company’s ability to deal with soaring demand to “the power of our unique flexible manufacturing model.” Smith & Wesson has been using outsourcing to make some of its gun parts to ramp up manufacturing during the coronavirus pandemic. This is less expensive, and less of a long-term commitment, compared to expanding factory capacity to meet the rise and fall of demand.

“As a result of their ability to flex up their production cycle, they have been better able to respond to increased consumer demand in recent months, and have gained market share as a result,” said Dionisio.

Gun manufacturers have had supply chain problems during the pandemic and retailers are running low on inventories. Gun makers are cautious about ramping up manufacturing capacity in case demand drops off, like it did immediately following the November 2016 election of President Trump.

But having a Democrat in the White House is widely expected to drive sales. Dionisio has been projecting increased gun sales during the Biden presidency, fueled by the fear of gun control.

Smith & Wesson said there has been a 3% price increase on products. Brian Rafn, a retired gun analyst who owns shares in rival gunmaker Sturm, Ruger, said prices for all modern sporting rifles could experience inflation in the coming months because of the fear of gun control.

Smith & Wesson, based in Springfield, Mass., is one of the best-known brands in the business. The venerable gun company’s primary competitor is Sturm, Ruger, a major player in the gun industry, as well as Glock, Sig Sauer, Daniel Defense, Mossberg, Browning, Taurus, Savage Arms and many others.