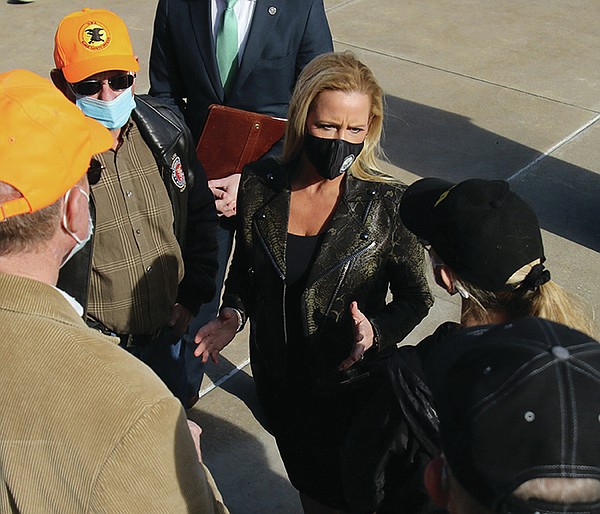 The National Rifle Association, currently locked in a legal battle with the New York State attorney general’s office, gained an ally in Arkansas Attorney General Leslie Rutledge, who announced Tuesday that her office is leading a multistate coalition supporting the National Rifle Association in a lawsuit against New York Attorney General Letitia James.

The NRA is attempting to block a separate lawsuit filed last August by James that seeks to dissolve the 149-year-old New York-based nonprofit organization over allegations that it funneled millions of dollars in donations away from its charitable mission for the personal use of a handful of top executives, including the organization’s vice president, Wayne LaPierre. The counter-suit filed by the NRA claims that James’ lawsuit was politically motivated and seeks to violate the organization’s free speech rights.

“Letitia James hopes in her state lawsuit to dissolve the NRA,” Rutledge said Tuesday during a news conference on the steps of the State Capitol in Little Rock. “She hoped to undermine the organization’s advocacy on behalf of Americans’ constitutional rights to bear arms.”

Rutledge said the amicus, or friend of the court, brief, which she said is joined by 15 other states, was filed in support of the NRA in arguing against an attempt by James to have the NRA lawsuit dismissed.

“I will not allow a politically motivated lawsuit filed by the New York attorney general to dismantle the National Rifle Association, which fights for the Second Amendment rights of all Americans,” Rutledge said, adding, “and most importantly, for all Arkansans.”

The attorney general called the lawsuit filed by New York “politically motivated,” with no basis in “what the NRA did or what its members did,” that seeks only to bring about the demise of the organization.

The lawsuit filed against the NRA alleges, in part, that LaPierre “exploited the organization for his financial benefit, and the benefit of a close circle of NRA staff, board members, and vendors” for nearly 30 years, and in the process, diverted “millions of dollars away from the charitable mission, imposing substantial reductions in its expenditures for core program services, including gun safety, education, training, member services and public affairs.”

In its counter lawsuit, the NRA has alleged that James had promised as a candidate to “take down the NRA,” saying that if she were to be elected, she would dismantle the NRA as a nonprofit corporation.

Rutledge said at her news conference that if the political climate in New York proves to be too inhospitable for the NRA, the nonprofit might find a warmer reception in the South.

“I’ve extended an invitation to the NRA that if you’d like to come to a state that will support you, Arkansas is open arms,” she said. “Because I can assure you that here in Arkansas, we will not only defend, but we will exercise our Second Amendment rights.”

Rutledge called the lawsuit a danger to democracy that could prove harmful to the U.S. Constitution if left unchecked and she vowed to continue her backing of the NRA regardless of the political cost.

“Even if leading this makes me unpopular in a state such as New York, I don’t care,” she said. “I’m going to protect the First Amendment rights of the NRA and its members, including myself, which also protects our Second Amendment right to bear arms.”

Rutledge was joined by Matt Herriman, the state director of the NRA, who echoed her sentiments, calling the lawsuit filed by James an “unconstitutional attack on our association.”

Herriman said that James had vowed to make the NRA her No. 1 target beginning on her first day in office. He said that by seeking to dissolve the organization, James is making good on her vow.

According to a news report in the Washington Post, when she filed the lawsuit last summer, James said the NRA had been undermined for years by top officials who repeatedly used their positions for their own financial gain.

“The corruption was so broad, they have basically destroyed all the assets of the NRA,” James said at the time. “No one is above the law, not even the NRA.”

In calling for the dissolution of the organization, James cited New York’s previous action against the Trump Foundation as precedent. That action led President Donald Trump to shut down the charity in 2018 amid allegations he used it for his personal benefit.

Information for this article was contributed by Tom Hamburger of The Washington Post.