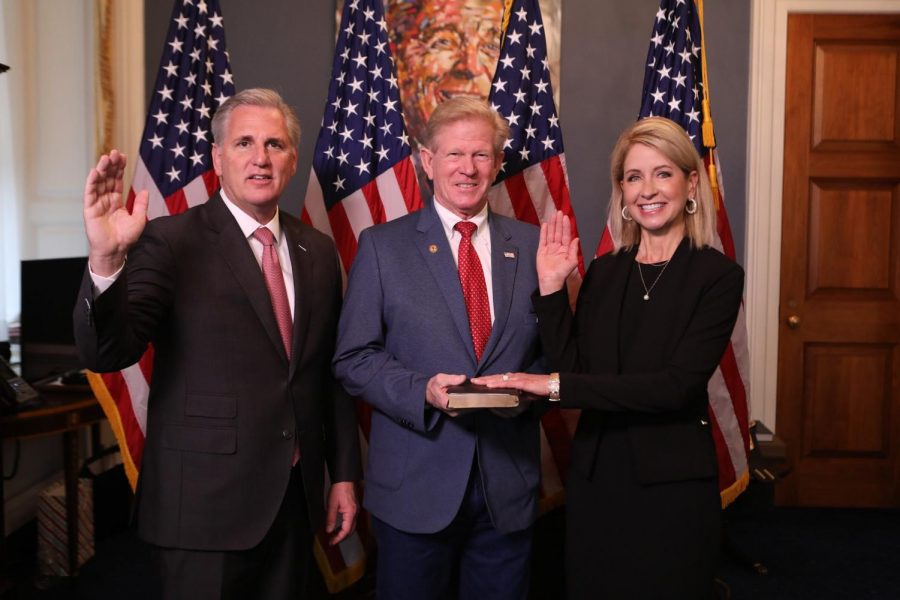 U.S. Rep. Mary Miller has received backlash after a speech Tuesday where she quoted Hitler.

Miller said in her speech:

“If we win a few elections, we’re still going to be losing unless we win the hearts and minds of our children. This is the battle. Hitler was right on one thing. He said, ‘Whoever has the youth has the future.’”

The speech was given two days after the freshman Congresswoman that represents Illinois’ 15th congressional district was sworn-in to her new position and has led many to denounce her, her words and some to call for her resignation or removal.

“Congresswoman Miller’s statement was a denunciation of evil dictators’ efforts to re-educate young people and similar efforts by left-wing radicals in our country today.”

Prior to that tweet Miller posted then deleted another statement saying, “Let me be clear. I would never glorify a genocidal dictator. It’s the left’s propaganda that controls the youth, and social media is utilized as a machine to do this. We need to restore our nation, and turn toward strong faith & family, and away from radical left-wing propaganda,” according to ProPublica.

Many replied to her second tweet, some to defend her but most to share their disagreement with her original statement and her explanation:

One petition, which as of 4:36 p.m. had 2,500 signatures, has signed and introduced by members of the Illinois Legislative Jewish Caucus.

The petition states Miller demonstrated “blatant antisemitism” and was disrespectful to Jewish people and all who have died at the hands of Nazis.

It added that, “a sitting member of Congress who uses Hitler’s obscene methods for indoctrinating children with racism and fascism as a guidepost, igniting hate and violence has no place in Congress.”

Miller represents many in the Eastern community as the university sits in her district.

University President David Glassman made a statement regarding Miller, who earned a B.S. in Business Management from Eastern, saying the university does not agree with her words:

“Yesterday’s events in our nation’s capital were deplorable and inexcusable. Our ability as Americans to achieve a brighter future together demands we respect our democracy and the democratic traditions and ideals of our nation. Those are the values on which Eastern Illinois University stands, and which will continue to guide our mission.

Further, and in clear support of those values, EIU denounces the words of recently elected regional representative Mary Miller and further condemns any reference to Hitler or his methodologies as a paradigm for American progress.”

Coles County public defender and Miller’s opponent in the 2020 election, Erika Weaver, released a statement Thursday night on the matter saying “…mere days after taking her oath of office, Congresswoman Mary Miller (R- Ill.) spoke to a gather crowd at our nation’s capitol and invoked Hitler’s position on children and the future of a country. In all of my years of advocating, researching, serving, and fighting for our children, I never found anything attributable to, inspired by, or worth crediting to the opinions of Adolf Hitler; the idea a member of our United States Congress would even think -let alone express- this mass-murdering xenophobic racist’s ideals is beyond demoralizing. It is appalling and even this word is not strong enough to truly express how repulsive her words and actions were.”

Miller has made no comment on the demands for her resignation or removal.