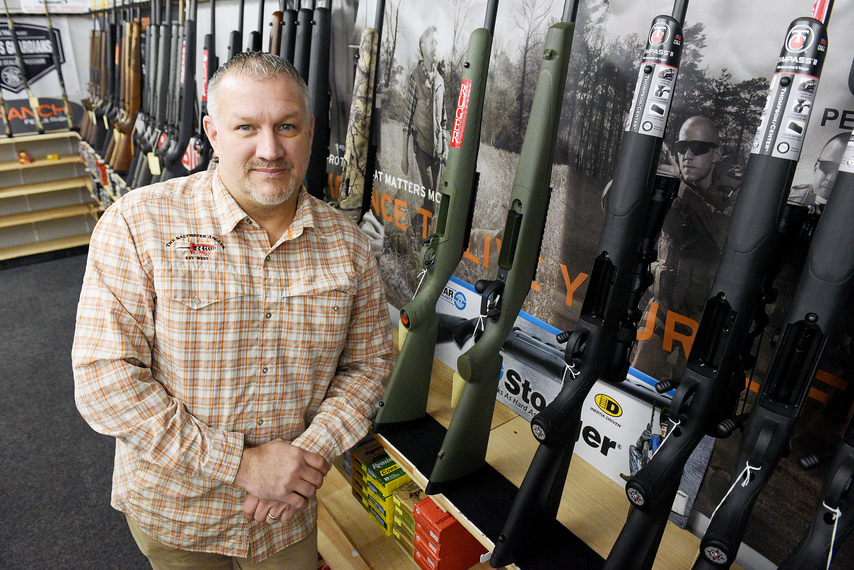 On Jan. 6, the nation watched as a mob stormed its way into the U.S. Capitol building, hell-bent on disrupting the certification of President-elect Joe Biden’s Electoral College victory over incumbent President Donald Trump.

The next morning, when John Havlick arrived to open up Frank’s Gun Shop in Vaill Mills for business, he was greeted by an unfamiliar sight.

“As soon as the riots broke out, the next day people were in the parking lot waiting to come in,” said Havlick, whose family has owned and operated the popular Route 30 destination for outdoors enthusiasts since opening nearly 40 years ago.

Political strife can often lead to spikes in firearms sales, and the last year has been statistical proof. Gun sales went through the roof in 2020, fueled by COVID-19 lockdowns, the wave of protests over the summer and, most recently, turmoil surrounding the results of the presidential election.

Sales shot through the roof starting in March, and they’ve stayed at or near that level ever since.

“It continued through the whole year,” Havlick said, “and it’s still continuing.”

Throughout 2020, records were set — both in New York and nationwide — for background checks required for gun purchases run by the FBI on the National Instant Criminal Background Check System, shattering numbers dating back to the start of the system in 1998.

Three times in 2020, the record for the most NICS background checks nationwide in a month was broken, capped off by a record 3,937,066 conducted in December — an increase of about 6,000 from the previous record, set in June.

Five of the 10 highest single-day NICS check totals were recorded in 2020, including four of the top six overall. Four of the five dates came in March, when the early days of pandemic-related shutdowns brought with it a mass of panic buying.

The other date in that group was Friday, Nov. 27, the opening of the holiday shopping season.

Nine of the top 10 weeks for NICS checks were also recorded in 2020, including Nov. 9-15 — the first full week after the election — and the two weeks immediately preceding Christmas.

For the year, 507,940 NICS checks were conducted in New York — an increase of 42.9% over 2019. While December was only the sixth-busiest month of the year for background checks in the state with 44,870 conducted — March, June, September, October and November were all higher — sales remain at record pace as area suppliers are trying to keep their shelves stocked with both guns and ammunition.

“There were a couple of points in 2020 where things slowed down from the pace they were at, but they were still well above what we’d consider to be normal volume trends,” said Craig Serafini, owner of Upstate Guns & Ammo in Schenectady.

Havlick said that the biggest spike in sales at Frank’s came over the summer, in response to the tense protests — both nationwide and locally — following the police killings of George Floyd, Breonna Taylor and others.

“That’s when it hit home,” said Havlick, citing protests that he termed as “riots” that happened throughout the Capital Region. “We never really used to see anything before at that magnitude. I think a lot of people from the Albany area got a little more worried than usual.”

The increase in sales, Havlick said, has been fairly even between handguns, rifles and shotguns. There’s also been a relatively even split between purchases by first-time gun owners and experienced owners.

There’s been a marked increase in first-time pistol owners applying for permits, and the weekly safety classes for new owners offered at Frank’s — which are currently limited to 10-12 people per class, due to social distancing restrictions — have been booked solid for “the last four or five months.”

As high as gun sales are, Havlick said, it’s ammunition — for all types of guns — that’s flying off the shelves at an even faster rate.

Since the election in November, and particularly since the events at the Capitol on Jan. 6, the upward trends have continued.

Both Serafini and Havlick said that increases in sales are usually seen in the aftermath of elections as current and prospective gun owners wonder what changes to firearms legislation could be produced by an incoming administration.

That’s especially true at this moment, with the Democratic Party set to control both houses of Congress and the White House, along with a veto-proof Democratic majority in the New York state legislature, which could bring stricter gun control regulations at both the state and federal levels.

“Any time you have an election year, there’s an uptick in gun sales because it creates unrest in the community,” Serafini said. “What you’re seeing right now is a huge uptick, both because of the political climate, the social unrest, but more specifically at the federal level. Biden and [Vice President-elect Kamala] Harris have come out with some very strong anti-gun statements. So, for anybody who is attentive to that, they’re very, very concerned that politics will change what gun ownership can be.”

In addition, last week, the nation’s largest gun rights lobbying organization, the National Rifle Association, filed for bankruptcy and announced its plan to leave New York — where it was founded in 1871 — and reincorporate in Texas.

The NRA’s move comes five months after New York Attorney General Letitia James filed a lawsuit seeking to dissolve the organization. The suit accuses the group’s senior leadership of violating laws regulating nonprofit groups and using millions of dollars from the NRA’s reserves for both personal use and tax fraud.

While Serafini called the NRA mainly a “political boogeyman for the Democrats” and didn’t believe the organization’s changes would have a major impact on consumers, he did acknowledge that there are plenty of ramifications that could impact the firearms industry as a whole.

However, Serafini said, he’s heard projections from inside the industry that forecast “an absolute marathon well into the next two or three years” over continued high sales.

As tumultuous as 2020 was, the first couple weeks of 2021 have continued that trend.

More from The Daily Gazette: