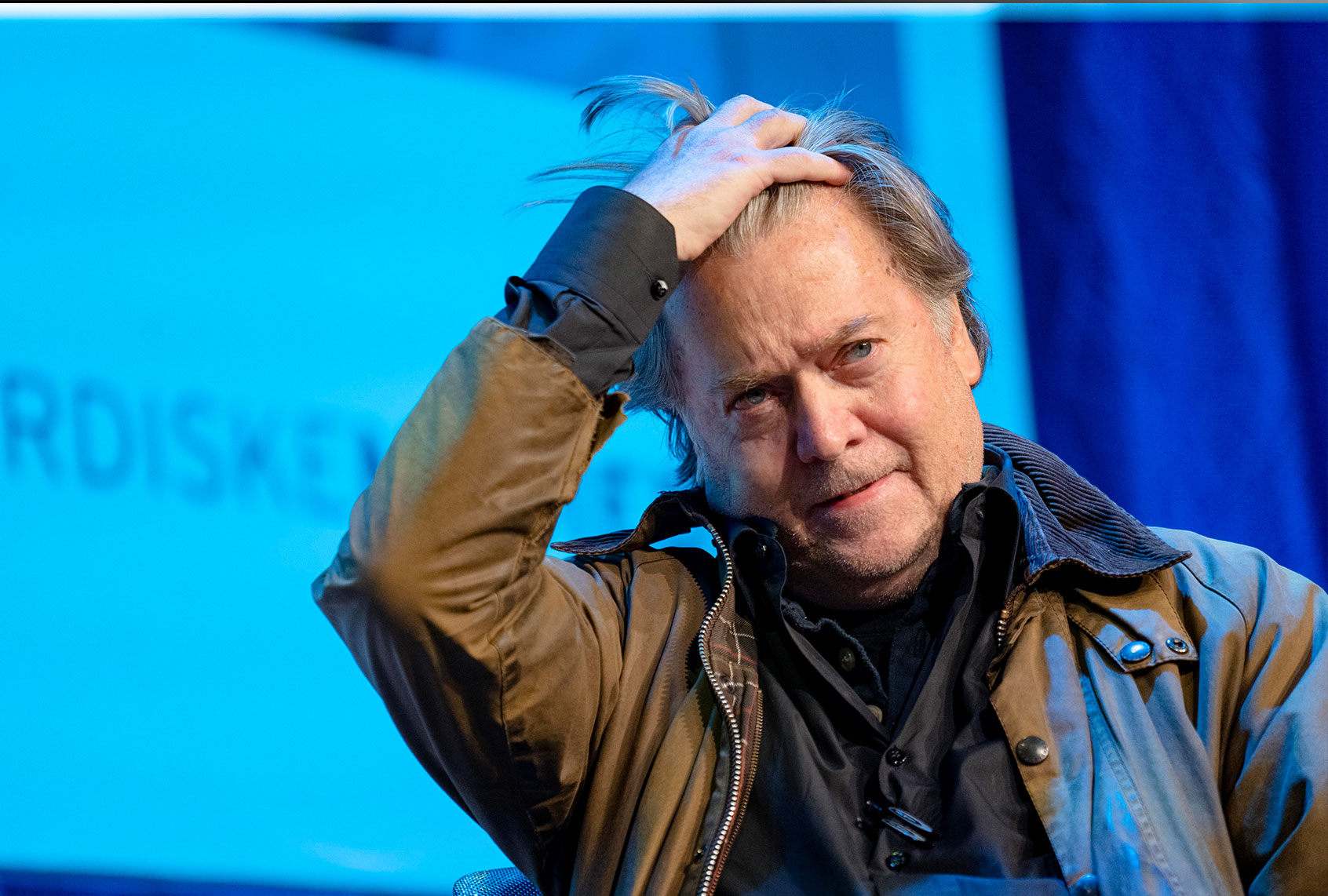 President Donald Trump pardoned Steve Bannon, his former top strategist and “campaign CEO,” in a late-night pardon dump that rewarded many of the president’s longtime loyalists hours before he left office.

Trump granted clemency to 143 people in the early hours of Wednesday morning, including Bannon, longtime Republican fundraiser Elliott Broidy and multiple lawmakers convicted of corruption. He also issued a full pardon to Republican operative Paul Erickson, who was convicted of fraud charges after coming under investigation due to his relationship with Maria Butina, the Russian spy who pleaded guilty to infiltrating conservative groups like the NRA.

The list of people who did not receive a pardon, however, is equally notable. White House lawyers dissuaded the now-formr president from pardoning himself or his family members because “doing so would amount to an unnecessary admission of guilt,” according to The Washington Post. He also did not pardon personal attorney Rudy Giuliani, who has not been charged but faces a federal investigation in New York, or any of the people involved in the deadly Jan. 6 Capitol riot despite extensive lobbying. Attorneys warned Trump that some of the pardons he was considering could violate the Constitution — which limits pardon powers related to impeachment charges — and might antagonize Republican senators ahead of his impeachment trial.

Trump also did not grant clemency to WikiLeaks founder Julian Assange or NSA whistleblower Edward Snowden. Trump likewise largely rejected the Justice Department process designed to vet recipients, instead relying on recommendations from his allies, according to a White House statement. About 14,000 people have pending pardon applications.

Bannon, who served as Trump’s top campaign strategist and later as a top adviser in the White House, was arrested last year by U.S. Postal Police on a 150-foot yacht belonging to fugitive Chinese billionaire Guo Wengui and charged alongside three others with defrauding donors of a private border wall project out of hundreds of thousands of dollars. Prosecutors alleged that Bannon used nearly $1 million of the $25 million the group raised on personal expenses. He was still awaiting trial when he received a full pardon.

Trump was torn on whether to pardon Bannon, according to the Post, and advisers tried to dissuade him from issuing it. Bannon was largely the architect of Trump’s 2016 election win and the travel ban on Muslim countries but fell out of favor with the president after he spoke somewhat too openly about Trump, his son-in-law Jared Kushner and other administration officials in Michael Wolff’s book “Fire and Fury.” Bannon and Trump rekindled their relationship when the former Breitbart editor helped push the president’s false allegations of election-rigging following President Joe Biden’s victory in November.

“What Bannon did likely violated state financial crime laws so he may still face criminal charges in multiple states as well as civil lawsuits for his fraud,” said former Justice Department lawyer Michael Zeldin. “Stay tuned, he’s not out of the woods yet,”

Bannon, whose exploits were bankrolled for years by the Mercer family, was also on the board of the defunct controversial data analytics firm Cambridge Analytica. Robert Mercer and his daughter Rebekah also financially backed Cambridge Analytica, Trump’s 2016 campaign, Breitbart and, more recently, the controversial far-right social media platform Parler, which was reportedly used by some to coordinate the Capitol riot.

Bannon, who prides himself as something of a political genius, tried to lead a failed campaign to grow a far-right populist movement in Europe after he was ousted from the White House and backed failed Alabama Senate candidate Roy Moore, whom he continued to support after Moore was accused by multiple women of preying on them as teenage girls in the 1970s. More recently, Bannon was banned from Twitter for calling for Dr. Anthony Fauci, the top infectious disease expert in the country, and FBI Director Christopher Wray to be beheaded. YouTube banned his “War Room” podcast channel in the wake of the deadly Jan. 6 riot after Bannon repeatedly pushed false claims about the election.

Trump also pardoned Broidy, who pleaded guilty last year to acting as an unregistered foreign agent, after he helped raise millions for the president’s 2016 campaign and served as the Republican National Committee’s national deputy finance chairman. Broidy lobbied the Trump administration to extradite Guo Wengui, the Bannon-linked Chinese fugitive, among other efforts on behalf of Malaysian and Chinese interests.

“Even Nixon didn’t pardon his cronies on the way out,” Noah Bookbinder, who heads the watchdog group Citizens for Responsibility and Ethics in Washington, said in a statement. “Amazingly, in his final 24 hours in office, Donald Trump found one more way to fail to live up to the ethical standard of Richard Nixon.”

Trump’s pardon of Erickson also raised eyebrows. Erickson came under scrutiny over his relationship with Butina, whom he helped infiltrate Republican circles and discussed setting up back channels between conservative groups and Russia. Erickson was sentenced to seven years in prison on unrelated charges of defrauding investors for years.

“Mr. Erickson’s conviction was based off the Russian collusion hoax,” the White House said in its statement.

The president granted clemency to multiple former lawmakers convicted of corruption, including former Detroit Mayor Kwame Kilpatrick, who was serving a 28-year sentence after he was convicted on dozens of corruption charges. Trump commuted Kilpatrick’s sentence at the urging of longtime supporters Diamond & Silk, among others, according to the White House.

Trump also pardoned former Rep. Randall “Duke” Cunningham, R-Calif., who served eight years for accepting millions in bribes from defense contractors, former Rep. Rick Renzi, R-Ariz., who served three years in prison on more than a dozen corruption and bribery counts, and former North Carolina Republican Party chairman Robin Hayes, who pleaded guilty to lying to the FBI after he was accused of a bribery scheme.

He also commuted the sentence of Salomon Megen, a Florida doctor who was convicted of defrauding millions from Medicare and bribing Sen. Robert Menendez, D-N.J., at the behest of the senator.

He likewise commuted the sentence of Sholam Weiss, who was sentenced to 835 years in prison for numerous fraud charges related to a life insurance scheme.

“The corruption pardons are actually worse because Trump also gave them to people who aren’t his friends,” wrote Business Insider’s Josh Barro. “They only make sense as a general statement that corruption is good.”

“They all had something Trump wanted or benefited him in some kind of way,” Nichole Forde, who is serving a 27-year sentence for nonviolent drug crimes and hand-wrote her clemency petition nearly five years ago, told the Post. “I am not part of the Trump elite.”

Trump’s other pardons included the rapper Lil Wayne, who pleaded guilty to weapons charges in December, rapper Kodak Black, who was sentenced to four years in prison on gun charges, and Casey Urlacher, the brother of former NFL linebacker Brian Urlacher, who pleaded guilty to charges related to an offshore gambling ring. He also pardoned Ken Kurson, who was the editor in chief of the New York Observer when it was owned by Kushner. Kurson was charged with cyberstalking his ex-wife and was awaiting trial.

Trump’s last-minute pardon spree reminded many of the GOP furor over former President Bill Clinton’s 140 pardons on his final day in 2001, which sparked a Republican congressional investigation and even a criminal probe that ultimately came up empty.

“Donald Trump conducted his presidency for his profit, making virtually every policy decision on a transactional basis — not what the Constitution required, not what benefited our country and our people, but only what increased his power, wealth and status,” Larry Kupers, who quit as Trump’s pardon attorney over his use of clemency powers, told the Post.

Trump’s latest string of pardons “reads less like a list of pardons than a desperate, last-minute argument that political corruption should not be a crime,” the watchdog group American Oversight said in a statement.

“Founders expected that Presidential pardons would be about mercy, apology, correcting miscarriages of justice, not about a President helping himself and his pals escape consequences of bad behavior,” wrote presidential historian Michael Beschloss, adding that there needs to be an investigation into whether any of the pardons were “granted in exchange for money or to silence people who could conceivably send Trump to prison.”