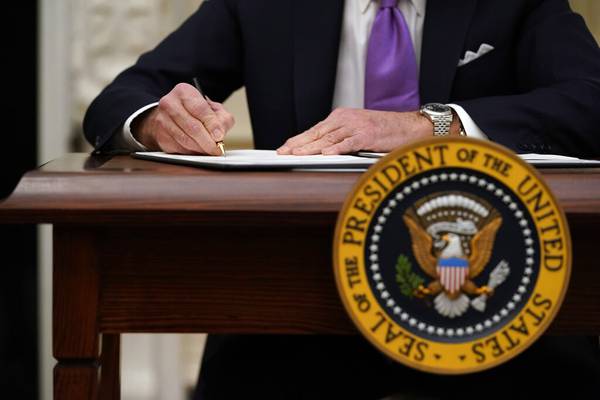 President Joe Biden signs executive orders after speaking about the coronavirus in the State Dinning Room of the White House, Thursday, Jan. 21, 2021, in Washington.

According to one widely quoted analysis, the United States military possesses about 4.5 million firearms.

Last year, U.S. civilians purchased nearly that many guns — in a two-month span.

It happened in June and July during the Black Lives Matter protests, when gun sales totaled 4.38 million. Along with spikes in sales around the start of the coronavirus pandemic, gun sales in 2020 had already shattered the annual record by October. That pushed the estimated number of civilian-owned firearms in the U.S. to 393 million.

Those numbers are a reminder of the ongoing importance of gun safety as lawmakers in Washington, D.C., begin their work in 2021. More to the point, the epidemic of deaths and injuries related to that enormous stockpile of weapons should drive new policies to protect Americans from gun-related violence. Last year saw an increase in domestic gun violence, unintentional shootings, gun violence in metropolitan areas and gun suicides, leading to a record 43,000 firearms-related deaths.

President Joe Biden entered office vowing to address the issue with a wide-ranging plan that included establishment of universal background checks, an assault weapons ban and red flag laws. With the Democratic majority in the House and with Vice President Kamala Harris holding the tiebreaking vote in the evenly divided Senate, Biden has an avenue to make meaningful progress.

But according to the leading advocacy organization Everytown for Gun Safety, there are also executive actions he can and should take right away. Among them:

• Improving the background-check safety net. Although it would require congressional action to implement universal background checks, Biden can make improvements on his own. For instance, he could order the FBI to alert state and local law enforcement when background checks from their jurisdiction are denied, and directing federal officials to expand the background check system to cover component parts and kits that are used to create untraceable “ghost” guns.

• Directing the Department of Justice to increase the monitoring of far-right extremist organizations and aggressively prosecute any crimes involving those groups with an eye toward disarming them.

• Revive gun-violence research. Due mostly to budget restrictions imposed by Congress, funding for federal research on guns amounts to fractions of a penny per dollar spent on other leading causes of death. Motor-vehicle accidents kill approximately the same number of Americans annually as shootings, for instance, but the government spends four times as much on research to improve the safety of vehicles and highways. Biden, by executive action, can’t unilaterally wipe away the budget restrictions but can order an initiative by such departments as the Centers for Disease Control and Prevention and the National Institutes of Health to build an expanded database of gun violence that will aid in future research.

• Developing suicide awareness campaigns aimed at students and veterans, and fostering policies that allow officials to temporarily seize weapons from individuals in crisis.

Those are a handful of several ways Biden can take immediate action while working with Congress on his larger initiatives. Ideally, by the time you’re reading this, he will already be off and running. And we trust congressional lawmakers will follow his lead and finally make a breakthrough on gun safety after years of Republicans cowing to the National Rifle Association.

The public is certainly ready. Surveys consistently show that support of more stringent gun policies has grown among Americans in recent years as mass shootings and other gun violence have increased.

That support certainly stands to reason. Coming off a year of record sales — which is saying something, given that the U.S. went into 2020 already the most heavily armed nation on the planet — the number of guns is going nowhere but up. And as the stockpile grows, it’s critical to bolster our safety net accordingly.