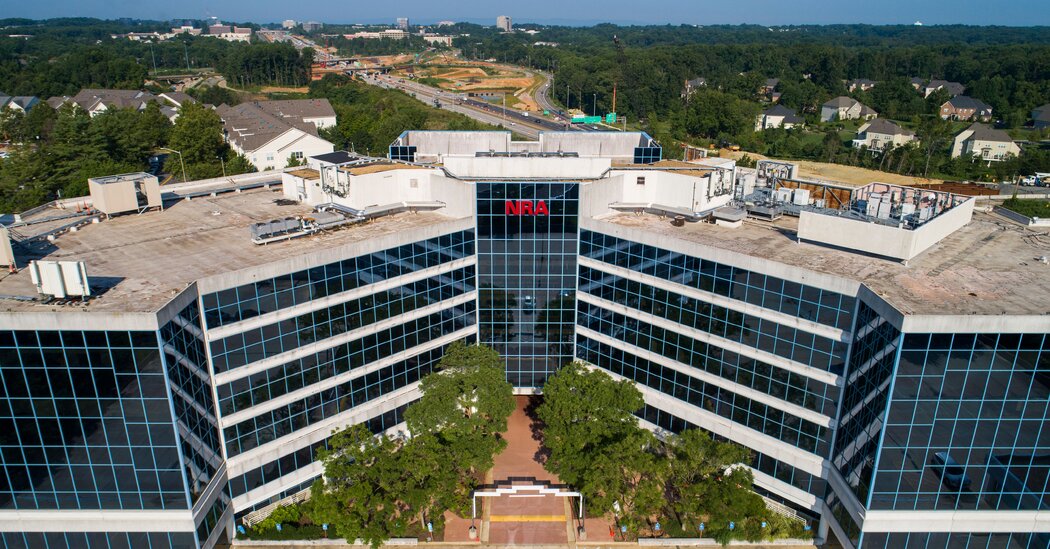 Not long after the National Rifle Association declared bankruptcy last Friday, one of its board members wanted to set the record straight.

“It has nothing to do with the N.R.A.’s financial posture, which is very, very strong,” said Bob Barr, a former Republican congressman from Georgia, in a TV interview. “It simply is a legal vehicle to move under protection of federal laws, to escape the abuse by the New York authorities.”

The organization’s audacious bankruptcy filing, in which it is not actually claiming to be insolvent, seeks to use the bankruptcy process to circumvent regulators in New York, where the N.R.A. has been chartered for a century and a half. The state’s attorney general, Letitia James, sued the association in August, seeking to shutter it amid claims of mismanagement and corruption. The N.R.A. said in its legal filings that New York officials had long sought to “weaponize the state government’s regulatory powers against it” and that the association now wanted to reincorporate in Texas.

But the claims of corruption have not come just from New York, or the political left. They are echoed in accusations leveled by former senior N.R.A. officials, including its onetime president Oliver L. North, some of its own donors and board members who departed amid a civil war within the association. What’s more, the organization disclosed in its most recent tax filings that Wayne LaPierre, its embattled chief executive, had repaid it hundreds of thousands of dollars.

Legal experts said the bankruptcy filing was likely to either be rejected or lead to a leadership purge, and was a sign that the organization and Mr. LaPierre were cornered by regulators.

“I see it as a Hail Mary for them,” said Adam J. Levitin, a professor specializing in bankruptcy at Georgetown University. “They may know they’re dead in the water if they don’t get out of the A.G.’s grasp.”

The N.R.A. is not financially under water; this week, it reported having assets roughly $50 million greater than its debts. Although there is some precedent for organizations that are not bankrupt to declare bankruptcy — Texaco’s 1987 case led the way, when the company sought to evade a more than $10.5 billion Texas court judgment against it — judges screen cases to make sure the company is acting in good faith, as required by the Bankruptcy Code. A judge who finds bad-faith behavior can throw out the case.

“There’s only one rule for a good-faith bankruptcy filing,” said David A. Skeel Jr., a professor of corporate and bankruptcy law at the University of Pennsylvania Law School. “You can’t say: ‘I don’t need bankruptcy. I’m really only here because I’ve got this other problem.’”

Yet that is what the N.R.A. has been doing. Because New York State’s financial regulators urged its bankers and other partners to stop doing business with the organization, and scared off some of the insurance companies that underwrite its gun owners’ insurance policies, the N.R.A. said, it “went all-out to fortify itself against escalating government hostilities.” Those efforts only fueled more legal disputes.

“The N.R.A. now confronts considerable litigation — against hostile government actors, as well as former vendors and executives” who “the N.R.A. determined had abused its trust,” the association said in the bankruptcy filing.

Mr. Skeel said the N.R.A.’s argument reminded him of the 1998 bankruptcy of SGL Carbon, a company that said it was in good financial condition but needed bankruptcy to stop a wave of lawsuits filed by its customers, steel makers that were accusing it of price-fixing. “Its case was thrown out,” he said.

During the N.R.A.’s first hearing in federal bankruptcy court in Dallas on Wednesday, the organization’s lead bankruptcy counsel, Patrick J. Neligan Jr., took issue with the prevailing view that the filing was an end run around Ms. James.

“The N.R.A. is not in any way attempting to escape regulatory supervision of the New York attorney general,” he said. In explaining the rationale, Mr. Neligan said the N.R.A. “needed both the breathing spell that Chapter 11 offers and an ability to centralize this litigation and deal with it in an organized fashion.”

William A. Brewer III, the N.R.A.’s main outside counsel, reiterated that “the filing does not seek to stay or transfer” the New York attorney general’s case but “streamline and organize the N.R.A.’s legal and financial affairs and, with approval of the court, to also allow the N.R.A. to reincorporate in the state of Texas.”

Legal experts are dubious about the N.R.A.’s chances of success.

Jay Westbrook, a professor who specializes in bankruptcy at the University of Texas, called the judge handling the case, Harlin D. Hale, a “very steady, no-nonsense judge.” While he had not yet studied the case, he said, generally speaking there was “an excellent chance one of two things will happen — either the case will be dismissed or, maybe more likely, it will be sent to New York” or perhaps Virginia, where the N.R.A. has its headquarters.

That would interfere with the N.R.A.’s plan to emerge from bankruptcy with gun-friendly Texas as its legal domicile. (It recently founded a wholly owned subsidiary, Sea Girt L.L.C., in Texas, in advance of its legal filing in the state.)

Even if the N.R.A. is allowed to remain under court protection, the judge would be cautious about using federal authority to thwart a state regulatory action, experts said.

“You can’t escape the A.G., period,” said Daniel Kurtz, a former chief of the charities bureau in the New York attorney general’s office, the division that handled the N.R.A. case. “They can’t simply move to Texas intact and become the N.R.A. in Texas without getting a court or the attorney general to approve the transaction.”

Mr. LaPierre’s three decades of authority over the N.R.A. could also be at risk, if a bankruptcy judge were to appoint a trustee — an outside official with the duty to run the bankrupt entity in the interests of its creditors and keep money from being removed improperly.

For the last two years, the N.R.A. has been consumed by a swirl of intrigue, investigation and infighting that left it largely on the sidelines in the 2020 election, after playing a major role in former President Donald J. Trump’s 2016 victory. At the heart of its scandals were allegations that Mr. LaPierre turned the nonprofit group into a piggy bank for himself and his top aides. There were revelations about hundreds of thousands of dollars spent on Mr. LaPierre’s suits at a Zegna store in Beverly Hills, and travel on the N.R.A.’s dime to locales like the Bahamas; Palm Beach, Fla.; Reno, Nev.; and Lake Como in Italy. The group even explored buying a $6 million mansion in a Dallas-area gated community for his use.

In August, Ms. James, whose office has jurisdiction over New York charities, sued the N.R.A., seeking its closing along with tens of millions of dollars in restitution from Mr. LaPierre and three other executives. In accusing the N.R.A. of widespread corruption, she said it paid a personal travel consultant for Mr. LaPierre $13.5 million, largely through no-bid contracts, and detailed private flights chartered for Mr. LaPierre’s wife and his niece, according to the complaint. During trips to the Bahamas, he made use of a 108-foot yacht called Illusions owned by an N.R.A. contractor. At the N.R.A.’s expense, he lavished gifts from Neiman Marcus and Bergdorf Goodman on his inner circle and once put his niece up at a Four Seasons hotel for eight nights at a cost of more than $12,000, the complaint said.

The activity has appalled some of the group’s donors, including one, David Dell’Aquila, who has sued the organization, and whose lawyer said he would intervene in the bankruptcy proceedings.

“We believe that the N.R.A.’s bankruptcy case is a bad faith attempt to block New York State’s effort to monitor the N.R.A.’s corporate governance,” Mr. Dell’Aquila’s lawyer, Elliott Schuchardt, said in a statement.

In one of its court filings this week, the N.R.A. argued that Ms. James’s litigation undermines the N.R.A.’s “own transparency and reform efforts,” and said it “has pursued the same executive and vendor misconduct alleged” by the attorney general “in multiple proceedings that predate” their litigation. While it may predate the litigation, however, much of the N.R.A.’s self-correcting actions took place after the attorney general’s investigation had begun.

Over the last few days, the sides have continued to parry. Mr. LaPierre said an important part of the bankruptcy was about “dumping New York.” Ms. James said “the N.R.A.’s claimed financial status has finally met its moral status: bankrupt.”

In court on Wednesday, Judge Hale asked both to simmer down. “There’s a lot of strong feeling in this case,” he said. “I would ask that everyone sort of ratchet that part of the case down some, now that we’re in bankruptcy court.”

But on Thursday, after a judge in New York State Supreme Court rejected a motion by the N.R.A. to dismiss the attorney general’s case, or change its venue to another part of the state, Ms. James said the order “reaffirms what we’ve known all along: The N.R.A. does not get to dictate if and where they will answer for their actions.”