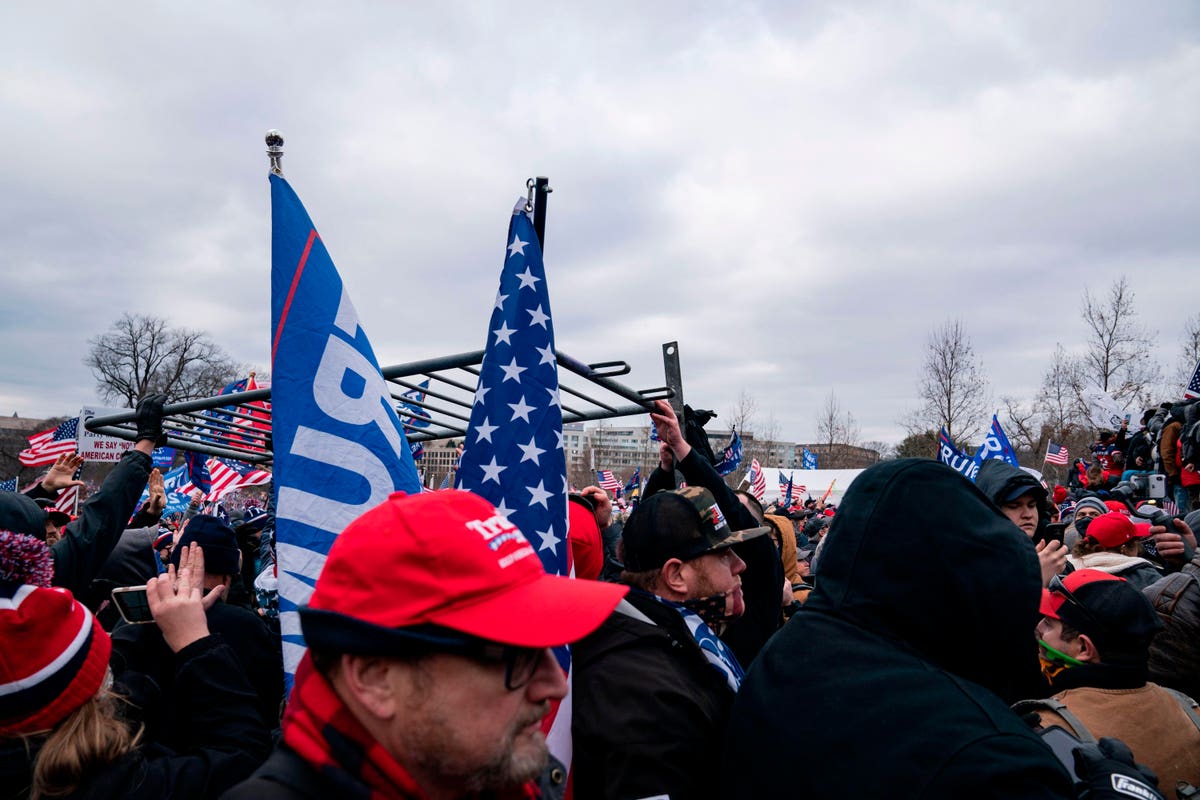 As the country held its collective breath before Wednesday’s transfer of power from President Donald Trump to President-Elect Joe Biden, products with incendiary messages and images that were displayed by rioters storming the U.S. Capitol on January 6, were still visible on the e-commerce sites of retailers such as Poshmark, Walmart Inc., Amazon and Etsy.

The mob that breached the Capitol in Washington, D.C. reportedly included members of militias such as the Oath Keepers and Three Percenters, conspiracy theorists like QAnon, and the racist and anti-Semitic Proud Boys and Boogaloos.

“Here we are standing in the shadow of the Capitol Dome… just days after a riotous mob thought they could use violence to silence the American people,” Biden said in his inauguration speech. “The answer is not to retreat inward, not trust those who don’t look like you, worship like you or get their news from the same place you do.”

A cursory scan of Poshmark’s site on Wednesday found a trove of products with dangerous messages, including a Trump 2020 T-shirt offered by Bella Canvas featuring the American flag with the words, “Time to Reload.” Other Tees showed multiple firearms replacing the stripes of an American flag, while others had the legends, “anti-NRA is a terrorist,” “Pro Life, Pro God, Pro Gun, Pro Trump,” “I’m Friends With LGBT” (Liberty, Guns, Beer, Trump), and “Smith & Wesson Made in the USA.” The description of an American Fighter Training Division men’s medium red shirt, read, “MMA Athletic with cool graphics. Good condition but has some deodorant stains in the arm pits. Cant be seen when worn.”

“Poshmark is a social marketplace built on love, integrity and community. Our priority is to ensure Poshmark is always a safe place to shop and sell, and we are committed to ensuring our platform reflects our values and the values of the community we serve,” a Poshmark spokesperson told me. “We have very clear content policies related to offensive and inappropriate content and will quickly remove such items if they are found on our marketplace. Acts of racism, hate speech, harassment, and discrimination of any kind are not tolerated on Poshmark and are a violation of our community guidelines. If our community sees or experiences such acts, we ask them to contact us so we can take swift action. We have a robust approach to content moderation that utilizes a combination of technology, our community, and our own team to ensure that Poshmark is always a safe and inclusive place where everyone can thrive.”

Walmart.com featured T-shirts with the messages, “Trump 2020: F—k Your Feelings,” “Trump 2024 Blitz: Trump Will Smash the West and Win,” and Biker Clothing Co.’s “’Sons of Trump” black long sleeve motorcycle style, which according to a customer review “attracted lots of looks and had people come up to and ask me where they could get one and the majority of the people were black!Yup the silent majority is gonna rise up and put the Dems out of office and into jail.”

“Like other major online retailers, we operate a marketplace that allows third-party sellers to sell merchandise to customers on our web site,” a Walmart spokesman said. “We don’t proactively choose the items listed by third party sellers on our marketplace. We provide policies to sellers of items that aren’t allowed, and we constantly scan for violations.”

Walmart’s e-commerce site says, “We aim to show you accurate product information. Manufacturers, suppliers and others provide what you see here, and we have not verified it. See our disclaimer.”

“Our team does a good job blocking items that are against policies, but sometimes there are items that don’t violate an existing policy, and we’ll often hear from associates and customers,” the spokesman said.

Walmart came under fire for continuing to sell MyPillow products after the CEO Mike Lindell in a video after the January 6 attack on the Capitol, said, “This is the only time we have in history to beat these guys, to suppress the evil, and beat the evil,” and “This is a fight for everything we’ve grown up with, everything we live for, everything this country stands for. The whole world is watching, and 100%, Donald Trump is going to be your president for the next four years.”

Policing offensive merchandise is difficult due to the sheer size available at the top online marketplaces, and would require constant vigilance and drilling down to the item level, said retail expert Carol Spieckerman, president of Spieckerman Retail.

“Few third-party sellers specialize in sourcing or making offensive products – instead, the items are likely to be buried within a range,” she said. “Any detective work and subsequent crackdowns would need to occur at the item level. Walmart, Amazon and Etsy have a vested interest in keeping an open-door policy and erring on the side of onboarding. With that philosophy and business model comes responsibility.

“This is a big factor in what I call ‘the marketplace mayhem’ that I caution companies to monitor,” Spieckerman added. “Shoppers tend to blame the marketplace banner for any snafus, particularly as no-name brands proliferate on these platforms.”

Twitter and social networking site Reddit, one of the biggest message board web sites, banned its biggest community devoted to former President Trump as part of a review and overhaul of hate speech policies. Do retailers have a responsibility for eliminating the messages of groups with dangerous agendas?

Spieckerman said yes. “The known brand and contact/resolution information is tied to the marketplace owner. Even so, if the presence of offensive merchandise gets too out of hand, it also reflects poorly on other sellers, and everyone loses credibility. It’s no wonder that brand-sensitive companies like Target are taking a more curated approach with the understanding that doing so limits overall assortment and passive revenue potential.”

Ets
y sells QAnon American flag unisex sweaters; American flag T-shirts, and American flag hoodies listed on the site as q wwgiwga, which stands for “where we go one we go all,” a message adopted by QAnon, and Q Anon Qanon White Rabbit Freedom and Q patriotic face masks, after the retailer in October told Forbes that  it would remove all merchandise tied to QAnon from its marketplace because its seller policies prohibit “items that promote hate, incite violence, or promote or endorse harmful misinformation.”

“Etsy is firmly committed to the safety of our marketplace,” a spokeswoman said. “We have a long-standing policy that prohibits items or listings that promote, support, or glorify hatred. When a seller opens an Etsy shop, they agree to adhere to our policies and we have a team that actively works to review and remove items that don’t comply.

“They have hundreds of item that don’t comply,” said a source. “The policies are longstanding, but apparently, there’s some wiggle room in deference to the current events. [They ] keep an eye on it because there is conversation out there.  For example, Black Lives Matter. “Etsy’s monitoring the calls for silence and calls for hate, but BLM is a social matter and allowed to appear on the site.”

Amazon offers T-shirts bearing the messages, “God Gave His Archangels Weapons Because Even the Almighty Knew You Don’t Fight Evil With Tolerance And Understanding,” “For Those I Love I Will Do Great And Terrible Things,” and “Vlad the Impaler, Stacking Bodies Since 1456,” a reference to the angel number message that supports and encourages violence through the angelic and spiritual realms, according to the brand Warrior 12 Premium Patriotic Apparel.

Amazon did not reply to a request for comment.

“We have a responsibility to make sure our marketplace doesn’t have offensive items,” said a retail executive who asked not to be named. “We still need to be monitoring and blocking and preempting things where we can, but the context of something can change the meaning of a phrase,” he said, adding that algorithms designed to flag obscenities and violent messages wouldn’t pick up a product with a message such as, All Lives Matter, because the words, taken separately, aren’t controversial.

Besides images of guns and violent messages cloaked in patriotism attributed to January 6 rioters, Etsy allows Swastikas to appear on the site, but the “products with Swastikas are required to have features that clearly set them within the context of cultural and religious origins or purposes, and the items must be photographed in a peaceful religious context or they’ll be subject to swift review and removal,” an Etsy spokeswoman said. “Our team will remove any standalone Swastika item.”

More than 1,000 items bearing Swastikas or Svastikas were listed on the site on Wednesday, including a vast array of fashion, jewelry and accessories. Etsy said items that use idiomatic expressions that include the word “Nazi,” such as “grammar nazi”, and products denouncing or mocking groups or historical figures with a history of organized, targeted violence against protected groups are also banned.

A Hitler Spoof Limited Edition Art Print of the “Jaws” movie poster, featured a shark in the ocean and pointed upward toward a boat with the word “Jews” instead of “Jaws”, and T-shirts with an image of former President Trump with an American flag pin on his lapel and the word, “Heil” splayed across the bottom of the shirt were two of the many items seen on Etsy Wednesday.