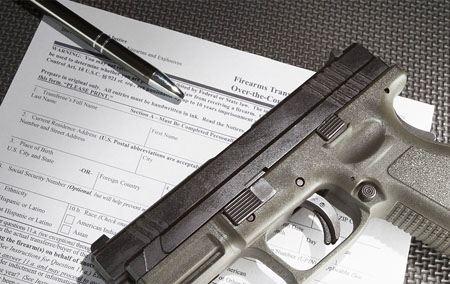 Joe Biden used the anniversary of the Parkland, Florida school shooting to officially launch his team’s assault on the Second Amendment, critics say.

Biden on Feb. 14 said he was “calling on Congress to enact commonsense gun law reforms, including requiring background checks on all gun sales, banning assault weapons and high-capacity magazines, and eliminating immunity for gun manufacturers who knowingly put weapons of war on our streets.”

On Feb. 14, 2018, authorities said Nikolas Cruz walked into Marjory Stoneman Douglas High School in Parkland and opened fire with an AR-15 rifle. The shooting left 17 dead, including 14 students. Cruz is currently awaiting trial and could face the death penalty.

White House press secretary Jen Psaki told reporters that Biden’s team is ready to move on the “ambitious plan” he laid out during the campaign.

Biden said on his campaign website that he would “defeat” the National Rifle Association. Among his proposed actions is repealing the Protection of Lawful Commerce in Arms Act, which protects gun manufacturers from some lawsuits, banning so-called assault weapons, as Congress did for 10 years in 1994, and forcing people to either give up certain guns and magazines or register them with the federal government.

The NRA’s lobbying arm has fired back at Biden, saying he wants to ban “America’s most popular class of centerfire rifles, as well on the factory-spec magazines for most of the defensive pistols sold in the U.S.”

“Just as when Joe Biden unsuccessfully pursued gun control as Barack Obama’s vice-president, your NRA is fully prepared to oppose whatever plans he may have to ‘defeat’ America’s largest and oldest civil rights organization and the fundamental liberties it protects,” the NRA stated in a recent blog post.

While Democrats control both chambers of Congress, they require some Republican support in the Senate to pass new legislation.

Meanwhile, Utah Republican Gov. Spencer Cox on Feb. 12 signed legislation that allows people in the state to carry a concealed gun without a permit.

“With the passage of this bill, Utah joins 17 other states with some form of permitless concealed carry,” Cox said in a statement to news outlets. “This bill protects Second Amendment rights, reduces permitless open carry (which is already legal), and includes significant funding for suicide prevention.”

House Bill 60, which was sponsored by Republican state Rep. Walt Brooks, a National Rifle Association member, states that an individual who is 21 or older “and may lawfully possess a firearm, may carry a concealed firearm in a public area without a permit.”

After Cox signed the legislation into law, Jason Ouimet, executive director of the National Rifle Association’s lobbying arm, said: “There is no reason a law-abiding person should have to ask for permission to carry a firearm for self-defense, The passage of this bill demonstrates Utah’s commitment to protecting the Second Amendment rights of its citizens. We thank Gov. Cox, Rep. Brooks, and all who supported this important bill.”