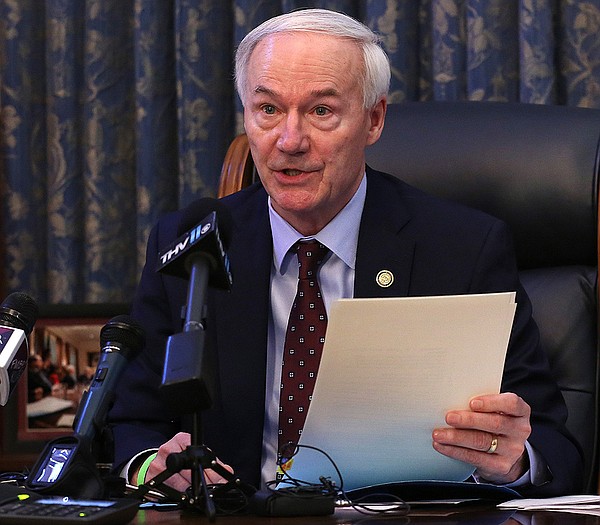 Gov. Asa Hutchinson signed controversial stand-your-ground self-defense legislation into law Wednesday, after the measure passed with overwhelming majorities in the Legislature despite the governor’s public hesitancy to support it.

The governor’s decision on Senate Bill 24 came on the final day for him to act before the bill became law without his signature. Had he vetoed the bill, the Legislature could have voted to override the veto with a simple majority.

The bill removes a provision of Arkansas’ self-defense laws that requires a person to attempt a retreat if he can do so with “complete safety” before using deadly force in self-defense. SB24 was championed by the National Rifle Association and many Republicans in the Legislature, who said it would decrease violent crime.

But opponents of the bill, including gun-control groups as well as Black and minority-group activists, argued that the law would encourage armed vigilantes and that its impact would be disproportionately felt in minority-group communities.

The governor’s office said Wednesday that it received 843 communications on SB24, the majority of which opposed the bill.

“I’ve heard from many in the minority community about their genuine fear on the impact of the stand-your-ground bill,” Hutchinson told reporters after announcing his decision. “For this reason, I discouraged this bill from moving through the General Assembly. I have no doubt these concerns are heartfelt and real, but there’s nothing in the language of the bill that would lead to different outcomes in our criminal justice system.”

Reaction to the governor’s decision flowed quickly from groups that had lobbied for and against the bill.

“Huge win for self-defense rights in AR,” he tweeted.

The gun-control advocacy group Moms Demand Action for Gun Sense in America released a statement Wednesday condemning the governor’s decision, as well as the lawmakers who carried the legislation.

“The evidence is stunningly clear: this law will make Arkansas less safe,” said Kate Fletcher, a volunteer with the Arkansas chapter of the group. “But instead of following the evidence and listening to the overwhelming opposition to this deadly bill, too many of our lawmakers caved to bullies like Sen. Ballinger, Rep. Pilkington, and their NRA allies. Shame on them.”

The Rev. Benny Johnson, a Little Rock activist and founder of Arkansas Stop the Violence, said he had spoken to Hutchinson about his opposition to SB24, adding that he was “very disappointed” about the governor’s decision to sign it.

“There’s so much violence going on right now, and this is just going to make things worse,” Johnson said.

Hutchinson noted that prosecutors and other law enforcement officials were neutral on SB24, after opposing a similar effort in 2019.

That effort failed when a single Republican on the Senate Judiciary Committee joined the committee’s Democrats in voting against a stand-your-ground bill proposed that year by Ballinger, preventing it from reaching the Senate floor.

In the meantime, Ballinger and Pilkington worked with the state’s prosecutors to draft SB24, which included language preventing gang members and criminals from taking advantage of a stand-your-ground defense.

The bill also included language stating that a person must be “lawfully present” at a location in order to use self-defense without the duty to retreat. Those words drew the anger of some gun owners, who said it would prevent them from using their weapons in places like schools, churches and bars that prohibit guns.

An attempt to amend the bill to appease those gun owners failed, however, after prosecutors threatened to withdraw their neutrality and oppose the measure.

Hutchinson told reporters Wednesday that while he was OK with the language of the bill, he was concerned about the “reaction of people” to the new law and urged lawmakers to pass separate legislation creating sentence enhancements for hate crimes.

A hate-crimes bill filed by the governor’s nephew, Sen. Jim Hendren, I-Sulphur Springs, has received little traction since it was filed before the start of the session. Hendren’s decision to leave the Republican Party last month also put distance between him and the majority party.

Ballinger said he was “pleasantly surprised” that the governor signed the bill, but quickly dismissed the notion that it would lend momentum to Hendren’s hate-crimes bill.

“I would be shocked if he gets a third of the Legislature to vote for it,” Ballinger said.

Hendren, asked about the status of his hate-crimes legislation Wednesday, said discussions around it were “in flux.”