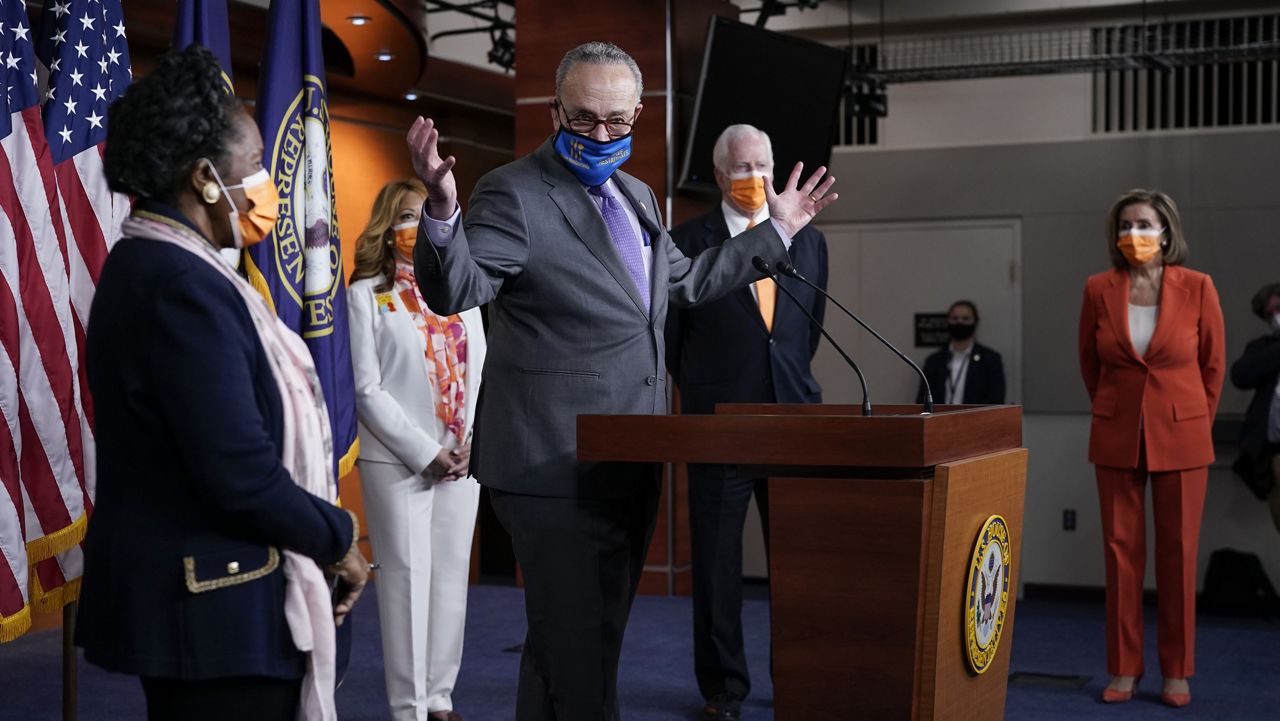 With COVID-19 relief in the rearview mirror, Congress passed the first major pieces of gun control legislation since Democrats retook the White House and the Senate.

And despite facing an uphill battle in the evenly divided Senate, Majority Leader Chuck Schumer pledged to bring the House’s background check measure to the floor for a vote.

H.R. 8, which had several Republican co-sponsors in the House, would expand background checks for all firearm sales or transfers, including private transactions, which are currently not required under U.S. law. The measure passed 227-203 Thursday morning in bipartisan fashion, with 8 Republicans joining Democrats in supporting the bill.

Later Thursday, the House passed H.R. 1446, which would close the so-called “Charleston Loophole,” which allows some gun sales to go through before a background check is completed. This bill passed 218-210, with slightly less enthusiastic bipartisan support – 2 Republicans joined Democrats in voting to support the measure, but 2 Democrats voted with Republicans against it.

Notably, Dylan Roof utilized this loophole to buy a firearm, which he used to kill 9 people at Emanuel AME Church in Charleston, South Carolina, in 2015.

“These people who were practicing their faith, their faith that taught them to welcome in a stranger, a stranger came to their door and they welcomed into their Bible study, he sat with them for an hour,” House Majority Whip Jim Clyburn, who represents part of Charleston, said on the House floor Wednesday. “The stranger that they had welcomed in had opened fire and killed nine of them, one of who was the pastor, a former intern of mine. This law would have prevented that gentleman from getting a gun.”

Both bills face an uphill battle in the evenly divided Senate, where the body’s 50 Democrats would require 10 Republicans to join their side, in accordance with the Senate’s filibuster rules.

In an op-ed, Clyburn, who introduced the bill, argued in favor of reforming the filibuster to pass this bill and other legislation in an op-ed for The Hill.

“There are several other bills that enjoy overwhelming, bipartisan public support facing the same obstacle; raising the minimum wage to $15 an hour, creating a path to citizenship for immigrant children brought to this country by their parents, and safeguarding and restoring voting rights,” he said. “I believe the time has come to end the procedural maneuver that holds important legislation hostage to arcane rules.”

Despite Republican support for H.R. 8, Minority Whip Steve Scalise (R-LA) urged the caucus to vote against both bills, arguing that “federal law already strictly prohibits transferring firearms in certain situations to ensure firearms are not transferred to prohibited individuals” in regards to H.R. 8, and H.R. 1446 would cause “arbitrary delays on background checks that will infringe upon millions of Americans’ Second Amendment right to defend themselves and their families.”

Lawmakers shared stories of gun tragedies that impacted their communites, and themselves personally.

“I was Chairman of the Fairfax County Board of Supervisors during the 2007 massacre at Virginia Tech,” Rep. Gerry Connolly of Virginia wrote on Twitter in support of H.R. 8. “We buried six of our best and brightest young people in the wake of that horrific day.”

I was Chairman of the Fairfax County Board of Supervisors during the 2007 massacre at Virginia Tech. We buried six of our best and brightest young people in the wake of that horrific day.

Today, I’ll cast my vote for #HR8 in their honor. Because background checks save lives.

“When I was just 19, my father was shot and killed,” Rep. Steven Horsford of Nevada said in a video. “The pain and suffering of losing a loved one to a senseless death is something that I know all too well. And three years ago, my community in Las Vegas suffered the deadliest mass shooting in U.S. history when a man opened fire on crowds of festivalgoers, killing 60 people and injuring others. Enough is enough.”

“Communities in Colorado have experienced the tragedy and the grief of gun violence far too many times,” Rep. Joe Neguse said on the floor of the House Wednesday. “Columbine. Aurora. Highlands Ranch. Enough is enough.”

Communities across Colorado have experienced the tragedy and grief of gun violence far too many times.

House Speaker Nancy Pelosi invoked the name of Rep. Gabby Giffords, who survived an assassination attempt in 2011, in her floor speech in support of the measure: “Her courage is an inspiration to the country. Her leadership to end gun violence is something that is so remarkable.”

But these bills drew far from universal support, with many Republicans coming out in opposition to the bill.

Freshman Rep. Madison Cawthorn of North Carolina accused Democrats of violating the Second Amendment and attempting to take his guns: “If you think this bastardization of the Constitution will be met with silence you know nothing of the America I know. You want my guns, I know it, we all know it. Well Mr. Speaker, you can come and take them.”

Rep. Chip Roy of Texas echoed Cawthorn’s claims: “The government is never going to know what weapons I own. Let me be clear about that. It’s not gonna happen.”

Regardless of filibuster rules and Republican opposition, Senate Majority Leader Chuck Schumer pledged to put a universal background check bill on the floor of the Senate for a vote Thursday: “H.R. 8 will be on the floor and we will see where everybody stands. No more hopes and prayers, thoughts and prayers.”

“A vote is what we need, a vote, not thoughts & prayers, and we will see where people stand,” Schumer continued. “And maybe we’ll get the votes. And if we don’t, we’ll come together as a caucus and figure out how we’re going to get this done. Because we have to get it done. For the lives of the American people, for the safety of our streets, and particularly for our young kids.”

The Biden administration also signaled support for both bills in a statement: “Gun violence is a public health crisis.  Every day, gun violence – community violence, domestic violence, suicides, and mass shootings – takes American lives and forever alters many more. Last year, we saw record levels of homicides in cities throughout our country, violence that disproportionately impacts Black and Latino communities. The Federal gun background check system is a proven tool to reduce gun violence and save lives.”

On Wednesday, White House press secretary Jen Psaki said at a briefing last month that President Joe Biden “is somebody, throughout his career, who has advocated for smart gun safety measures” and is “not afraid of standing up to the NRA – he’s done it multiple times and won – on background checks and a range of issues. And it is a priority to him on a personal level.”