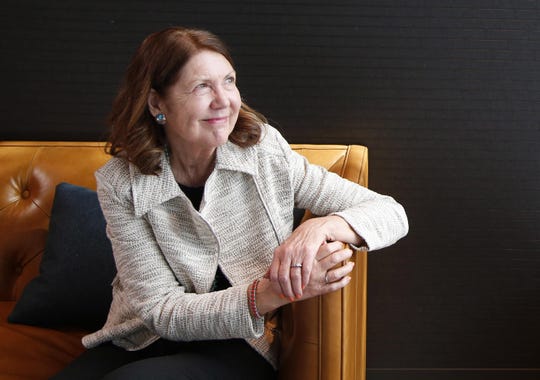 Rep. Ann Kirkpatrick, D-Ariz., talks about a recent fall and seeking treatment for alcoholism during an interview at The Arizona Republic in Phoenix on Feb. 21, 2020. (Photo: Cheryl Evans/The Republic)

Rep. Ann Kirkpatrick says her fifth term in Congress will be her last.

Kirkpatrick, D-Ariz., is expected to announce Friday that she will not seek another term representing the Tucson area, a move that comes as the state’s political boundaries will be redrawn ahead of the 2022 elections.

At 70, Kirkpatrick said her health and recovery from alcohol dependency was “not a factor at all” in her decision.

“I’ve been in public service for 18 years and I’ve always been a proponent of term limits and … I’m sort of term-limiting myself,” she said.

“It’s time to pass along the torch, the baton, and let somebody else take over. Plus, quite honestly, there’s a personal interest. I have three grandsons. … We would just like to be available to them, spend more time with them.”

Kirkpatrick’s low-key persona and deep roots in Arizona’s White Mountains helped her cast herself as a populist, whose career rose and fell with the state’s shifting partisan currents.

Kirkpatrick represented two very different districts in Arizona: For three terms, she represented northeastern Arizona, including vast tribal areas. Her final two terms have her representing part of Tucson and Cochise County on the U.S.-Mexico border.

In between, she lost a 2016 Senate race against Sen. John McCain, R-Ariz., in his final election.

Kirkpatrick’s departure is likely to boost Republican interest in challenging for a House seat in that area, which had been among the nation’s most competitive until the Trump era, when Kirkpatrick breezed to a pair of easy wins.

Her career is perhaps most associated with the ups and downs of the Affordable Care Act in her freshman term.

Kirkpatrick voted for the health insurance overhaul that was former President Barack Obama’s signature domestic achievement. It was a major factor in her defeat in 2010 to Republican Paul Gosar. But, as public sentiment began shifting, the law, with its reauthorization of Indian Health Services, helped her win another term in 2012.

Former Rep. Ron Barber, D-Ariz., who worked with Kirkpatrick during his tenure in the House and, in recent years, worked for her office, said the demands of cross-country travel take a toll. He praised Kirkpatrick for being willing to take votes that could cost her politically, such as the ACA.

It was a sentiment shared by Carmen Gallus Frias, her former chief of staff.

Two months before her vote for the ACA, Kirkpatrick walked away from a constituent event at a grocery store in Holbrook surrounded by angry residents. The encounter was caught on videotape and was cast as a symbol of Kirkpatrick being out of touch with Arizonans.

After her loss in 2010, Kirkpatrick set out to win her seat back. The House map changed in 2012, and Gosar opted to run in the more-conservative district he still represents, which covers northwestern Arizona.

With help from third-party voters and lopsided support in Indian Country, Kirkpatrick, who grew up speaking Apache, won back the seat in northeastern Arizona and held it for the next four years.

During that time, Kirkpatrick pushed for approval of a federal land swap that would allow the Resolution Copper Project to proceed near Superior on land viewed as sacred by members of the San Carlos Apache Tribe.

The mine, which could be one of the largest in the U.S., was pitched as a way to sustain thousands of jobs and provide billions in economic activity.

That long-stalled project moved ahead, with key help from McCain. Last week, however, the Biden administration delayed the release of an environmental-impact study required to complete the deal amid ongoing public opposition.

Kirkpatrick seemed set to exit the political stage after her 13-percentage-point loss to McCain. Instead, Kirkpatrick mounted another comeback.

She was poised to challenge then-Rep. Martha McSally, R-Ariz., in large part over her support for GOP efforts to take down the ACA. But McSally ran for the Senate seat being vacated by Sen. Jeff Flake, R-Ariz., and Kirkpatrick won easily in a new district.

Kirkpatrick was born on the Apache reservation near McNary and raised in Pinetop-Lakeside, not far from Show Low.

Her upbringing in rural Arizona helped her form deep connections to the communities she represented and stave off a loss in 2014, a year when Republicans routed Democrats across the country, but not in Kirkpatrick’s district.

Over the years, Kirkpatrick went from someone who touted an “A” rating from the National Rifle Association to advocating for more gun-control restrictions after her friend and colleague, former Rep. Gabrielle Giffords, D-Ariz., was shot in the head in an attack that killed six and left 12 others besides Giffords wounded.

Last year, Kirkpatrick added the most personal chapter to her political career when she publicly acknowledged a drinking problem and went into rehabilitation after she fractured her spine and cracked her ribs in a fall exiting the subway in Washington.

“Recovered from that, thank heavens, and I was very lucky. No permanent injuries. No head trauma. No broken bones. And, you know, a little bit of a wake-up call for me,” she said in an interview with The Republic last year.

Almost immediately afterward, the coronavirus pandemic shut down normal operations in the House, as in other walks of life. Kirkpatrick, a member of the powerful House Appropriations Committee, has spent most of the past year voting in the House by proxy and attending hearings virtually.

Kirkpatrick elaborated on her congressional tenure in an interview with The Gaggle, The Arizona Republic’s political podcast, which will be available on Wednesday.