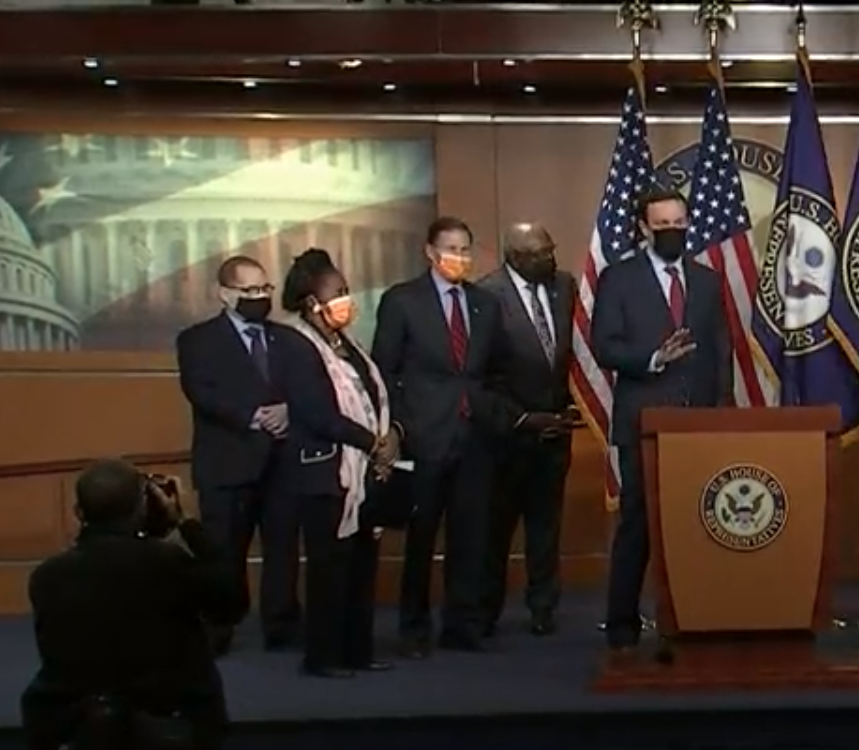 Sen. Chris Murphy at the podium at a gun control press conference at the U.S. Capitol on Thursday. At center is Sen. Richard Blumenthal.

For the second time since the slaughter of 20 school children and six educators in Connecticut, the U.S. House of Representatives voted Thursday to pass a bill requiring universal background checks for firearms purchases. For the first time, the House version is promised a vote in the Senate.

“When they sent it over to us the last time, it went into Mitch McConnell’s legislative graveyard,” said Sen. Chuck Schumer, D.-N.Y., who succeeded the GOP’s McConnell as majority leader in January, when Democrats won control of the Senate.

Democratic Sens. Richard Blumenthal and Chris Murphy of Connecticut and other gun control advocates now can test their thesis that the ground has shifted since 2013, when not even a Democratic majority could pass background checks after the school shooting at Sandy Hook. Polling shows widespread support for a federal version of what already is law in Connecticut.

“This issue has a reputation of being controversial, but it is only controversial inside the beltway,” Murphy said. “Outside of Washington, Republicans, Democrats, gun owners, non-gun owners, NRA members, non-NRA members agree we should tighten our gun laws to make sure that criminals and people with histories of serious mental illness cannot buy guns. It is a unifying issue.”

Murphy and Blumenthal joined Schumer, House Speaker Nancy Pelosi of California, House Whip Jim Clyburn of South Carolina and others at a press conference before the House passed H.R. 8, which expands background checks to all commercial sales, including those conducted on the internet and at gun shows, and H.R. 1446, which closes the loophole that allowed a white supremacist to buy the gun used to kill nine Black people in June 2015 at Mother Emanuel AME Church in Charleston, S.C.

The Charleston shooter was cleared to buy a gun in part because a background check was not completed in three business days, the deadline under current law. H.R. 1446, which was authored by Clyburn, would extend the deadline to 10 days. At that point, a purchaser could request an expedited review.

“In order to own a gun, you should have to pass a background check, regardless of where you purchased the gun,” said U.S. Rep. Jahana Hayes, D-5th District. Sandy Hook is in her district.

The Democrats have argued that the strength of the gun-control movement has been overlooked due to McConnell’s refusal to bring gun bills to a vote during his six years as majority leader. Democrats said McConnell was intent on protecting Republicans from a difficult vote: background checks are popular, but not with the NRA or, potentially, conservative GOP primary voters.

In April 2013, four months after Sandy Hook, the Senate fell six votes short of the 60 necessary to avoid a filibuster on a Senate bill that also would have expanded background checks to gun shows and online sales. Opponents claimed it would have created a gun registry, which was not an element of the 2013 Senate bill or the one passed Thursday by the House.

“We have a real opportunity to make history here,” Blumenthal said. “I’m asked often what has changed since Sandy Hook. We have a growing grassroots political movement with leaders at the local level changing history. And we have House members who have run on this issue who have not just answered questions — they made it a priority.”

One of them is Lucy McBath, the mother of a shooting victim. A Democrat, she won the seat once held by Republican Newt Gingrich with a campaign focused on gun control. At the press conference Thursday, McBath wept while talking about what passage of the two bills would mean to her and other parents touched by gun violence.

Under current Senate rules, 60 votes are necessary to overcome a filibuster, and the Democrats control the evenly divided chamber only by virtue of Vice President Kamala Harris’s ability to cast tie-breaking votes as the presiding officer of the Senate. Murphy thinks getting 10 members of McConnell’s caucus to oppose a gun-control filibuster is possible.

“You know, his members have expressed to me over the past several years that they want to get right on this issue. So I don’t think we should accept that there aren’t 60 votes in the Senate for universal background checks,” Murphy said. “So much has changed. The political power of the anti-gun-violence movement is infinitely stronger. The NRA is a shell of itself. And so I’ve had a lot of Republican members come to me and express their willingness to take a new look.”

Schumer said a floor vote will challenge Republicans to offer more than “thoughts and prayers” about gun violence.

“We will see where everybody stands,” Schumer said. “We are shining the spotlight on this issue.”

Mark Barden, whose son Daniel was one of the 20 first-graders killed at Sandy Hook, was in Washington with other gun-control advocates, rallying before the vote. He is a co-founder of Sandy Hook Promise, a violence-prevention group organized after the shooting.

“We have waited too long,” Barden said in an emailed statement. “We call on every Senator to simply do their job to protect our communities from gun violence and pass universal background checks immediately.”

“We Are Not Waiting To Do What’s Right” – Gov. Carney Signs 6 Gun-Related Bills – WGMD
NY Gov. Kathy Hochul wins Democratic primary — the first woman to do so in the state, AP projects
Amid New Developments in America’s Gun Debate, Get the Backstory
NJ looks to expand list of gun-free places to limit conceal-carry
Opinion | Republican support for gun legislation offers hope for bigger reforms