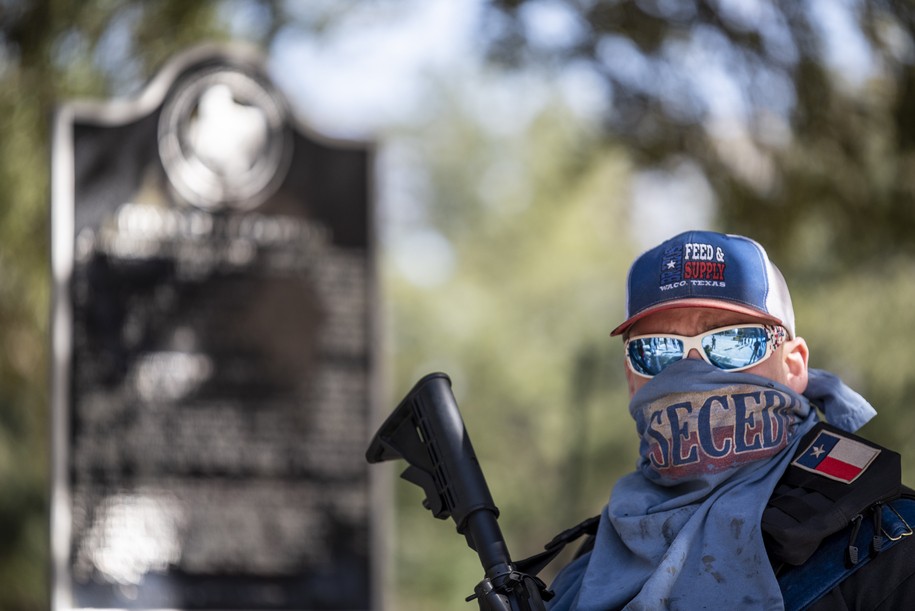 Leading the way once again is Texas, where Republican legislators filed a bill creating a referendum election on whether Texans should create a joint legislative committee “to develop a plan for achieving Texas independence.” Its advocates call the secession movement “Texit,” and as Owen reports, it’s gaining steam not just in the Lone Star State but elsewhere as well.

Texas GOP Chairman Allen West is stoking those fires. In December, following the Supreme Court’s ruling knocking down Trump’s post-election lawsuits, West issued a statement calling for the state to leave the union.

“Perhaps law-abiding states should bond together and form a Union of states that will abide by the constitution,” West said. “The Texas GOP will always stand for the Constitution and for the rule of law even while others don’t.”

“I am sick to my stomach watching what is happening to our country,” wrote a commenter on the NRA’s Facebook page. “As a Texan, I find myself supporting HB1359 (for secession) … At any other time I would have said absolutely not, but I find that harder to say.” Among her reasons for supporting Texit: “Every day we inch closer to a socialist dictatorship where the constitution has lost its meaning.”

“People’s level of grievance against the status quo has reached a level to flip that switch, where they’re seeing Texas Independence as the solution to their problems,” Texas National Movement leader Daniel Miller told Vice, claiming that interest in Texit has surged in recent months (though he declined to provide any documentation of that).

Texans are not alone.

A survey by Bright Line Watch found that 35% of Republicans and 37% of independents favored secession from the union to form a new regional union with like-minded states; the proposal was particularly popular among Southern Republicans at 50% support. It also found that only 22% of Republican voters had confidence in the fairness of national elections.

The “Texit” movement is being monitored enthusiastically online by a variety of far-right partisans, as Owen observes. “SECESSION OR DEATH,” commented a chat participant at the conspiracist MAGA message board patriot.win. “These are your only options. The ammo box is necessary.”

However, much of the secession talk in Texas fell silent after the state was rendered without power during a severe snowstorm in February—mainly due to the overpowering reality that the state’s need for assistance outside its borders was intense for the weeklong crisis and well afterwards.

The secession movement is closely connected with the same ideologues who promoted the Jan. 6 insurrection at the U.S. Capitol. In its aftermath, a number of extremist groups—including militiamen and QAnon fanatics—who have been forging alliances with the intention of forming an antidemocratic insurgency under a Democratic presidency.

Similar, more regionalized far-right secession movements have been gaining momentum as well. In Oregon, voters in five rural counties will cast ballots on an initiative to secede from Oregon and join the state of Idaho. The new state would be called “Greater Idaho.”

Initiative organizers claimed they submitted 141% of the signatures required for a vote on the initiative in those five counties. The state as proposed, however, would consume all but 14 of the state’s 36 counties.

“Rural counties have become increasingly outraged by laws coming out of the Oregon Legislature that threaten our livelihoods, our industries, our wallet, our gun rights, and our values,” Mike McCarter, president of Move Oregon’s Borders, told the Idaho Statesman. “We tried voting those legislators out but rural Oregon is outnumbered and our voices are now ignored. This is our last resort.”

A similar proposal for Washington State was introduced by Republican legislators in January. It would split the state into two halves divided by the Cascade Range, with the new state being named “Liberty.”

It’s a proposal that has long been touted by Matt Shea, the far-right legislator from Spokane Valley who retired last year amid discussion of forcing his removal for his associations with “Patriot” movement extremists and domestic terrorists.

Threatening secession has long been a predictable Republican response to losing elections. In 2008-9, Texas led a parade of states where officials discussed the possibility of leaving the union unilaterally after Barack Obama won the presidency. The idea gained traction in right-wing media as well; Fox News’ Glenn Beck in particular helped root for secession on his daily show.

The same happened again in 2012-13 after Obama’s reelection. Some eight states successfully filed secession petitions on a White House website that December, though the petitions naturally were rejected as unconstitutional. Texas again led the pack with 117,373 digital signatures.

Other secession movements, including one in Maryland to again form a 51st state, joined in the sore-loser festivities. As I observed at the time:

Their antipathy to democracy always creeps out, even in their conspiracy theories (how many times have we heard the far-right refrain, “This is a republic, not a democracy!”), but more importantly in their actions and their political strategies, embodied most recently in the gutting of the Voting Rights Act and the ongoing efforts at voter suppression by conservative Republicans.