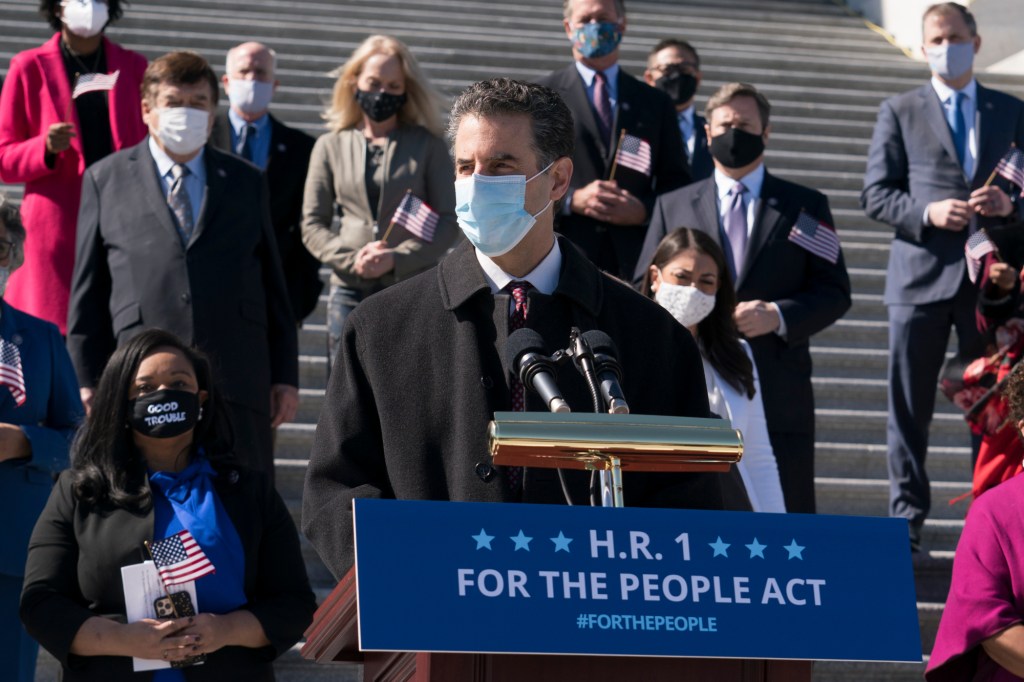 A ballot in the United States is a lot like U.S. currency. It’s a piece of paper that can be used to move value from one place to another.

U.S. currency is driven around in armored trucks, stored in vaults, and protected from counterfeiting by the United States Secret Service.

Ballots, on the other hand, are increasingly being handled as if they were confetti, tossed in many directions because the sight of all that paper flying around gives people a good feeling.

It would give people a good feeling to stand under a shower of hundred-dollar bills while holding a bucket, but we don’t pass laws requiring banks to transport cash by dropping it off the roof of a building.

The U.S. House of Representatives has passed H.R. 1, the “For the People Act.” According to the summary on the House website, the bill “addresses voter access, election integrity, election security, political spending, and ethics for the three branches of government.”

The bill would sweep away state laws and long-standing procedures that have been put in place over the years to ensure that only eligible voters cast ballots, that the ballots are securely transported, verifed and tallied, and that the election results can be relied upon to represent the true will of the voters.

Some people would tell you that these laws were put in place to manipulate the outcome of the elections by denying some eligible voters the right to vote.

Laws of that type have been scrutinized and challenged for decades, and if there truly are any of them left on the books, of course they should be stricken. What we’re seeing now, however, are challenges to utterly neutral provisions such as deadlines to return ballots. Lawyers are twisting statistics into far-fetched arguments that some ethnic groups are less able to return a mail-in ballot by election day.

It’s true that some voters live in rural locations or work long hours. It’s also true that some politicians are looking for any pretext they can find to throw out laws that prevent the confetti problem.

Suppose you were writing a screenplay about a dishonest politician who was facing re-election. Your character is looking for a way to somehow add phony voters to the voter registration rolls, get ballots mailed to their “mailing address,” fill them out the right way, scribble a signature on the envelopes, dump a sack of them in an unattended drop box, and have them count.

If H.R. 1 becomes law, your film might win an award for Best Documentary.

The law would require all states to adopt automatic voter registration, the California innovation that was responsible for the Department of Motor Vehicles inserting tens of thousands of errors into the voter registration records as well as registering ineligible voters. Under automatic voter registration, every eligible citizen who interacts with a designated government agency – the DMV, a public university, a social service agency – would be automatically registered to vote unless they specifically opt out. Proponents say this could add as many as 50 million new voters to the rolls. But how many in error? We may never know, because the law makes it more difficult to find and correct erroneous or outdated registrations by prohibiting officials from relying on “caging” data – lists of voters’ addresses to which mail was undeliverable—to clean up the voter rolls.

The law has other provisions that would potentially chill freedom of speech. It would increase criminal penalties for statements that are determined to be false or misleading, or intimidating. It would allow citizens to go to court to stop “voter deception.” It would require government officials to disseminate “corrective information” to voters. Who decides what’s false, misleading, intimidating or corrective? There may be no need to decide. When you threaten costly criminal and civil actions against people who make certain statements, many people will be chilled from making any statements, and it will be easier to pressure social media platforms to suppress or delete statements that somehow slip out.

As if that wasn’t enough of a deterrent to political speech, the For the People Act seeks to expose the names of people who have donated to nonprofit organizations. Reformers consider these donations “dark money,” so if you have donated to a nonprofit group that also supports candidates or campaigns, such as the National Rifle Association, H.R. 1 would require these organizations to publicly disclose their donors.

Feeling the chill yet?

If you don’t think ballots are like currency, consider that these lawmakers just voted narrowly, and along party lines, to spend $1.9 trillion of money borrowed from future generations.

If it was truthfully titled, H.R. 1 would be called the “From the Children Act.”