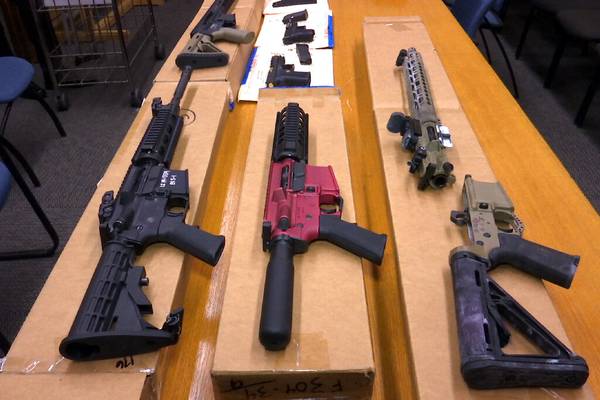 This Nov. 27, 2019, file photo shows “ghost guns” on display at the headquarters of the San Francisco Police Department in San Francisco. Gun control legislation introduced at the Nevada Legislature calls for banning “ghost guns,” those untraceable firearms often built at home and without a serial number.

Gun control legislation introduced today at the Nevada Legislature calls for banning “ghost guns,” those untraceable firearms often built at home and without a serial number.

Assembly Bill 286, sponsored by Assemblywoman Sandra Jauregui, D-Las Vegas, would also implement a criminal penalty for bringing guns onto private property where they are banned.

Jauregui said she brought the bill forward due to an increase in violence and gun-related incidents on the Strip, which last year saw at least 10 shootings over a four-weekend stretch in the fall. The bill was heard in committee.

“In a post-COVID world, we need to show visitors and residents alike that we are a place where you can forget about your problems, not come to find more,” said Jauregui, a survivor of the Oct. 1, 2017, mass shooting on the Strip. “We know we need every selling point we can get to get our tourism economy back on track.”

“Ghost guns” are built at home through kits that do not require serial numbers. They are legal federally, but can’t be built with the intent to sell.

Due to the untraceable nature of these weapons, it’s difficult to determine exactly how many may be in circulation. More than 40% of guns recovered in connection with California crimes were “ghost guns.”

“They are a ready way for people who are not allowed to buy a gun to legally obtain one nevertheless,” said David Pucino, a senior staff attorney at Giffords Law Center to Prevent Gun Violence. “And they have been used by such individuals, who are prohibited because of felony convictions or because they were underage, in acts of mass violence, including at Santa Monica College and Saugus High School in California.”

The bill excludes guns that are antiques, collector’s items or permanently inoperable. The bill’s other major provision is an opt-in process for businesses to ban firearms on their property. Businesses are already able to ask people to leave for many reasons, including firearm possession, but the bill would make it expressly illegal to have a firearm on private property.

“The language is not intended to prevent any specific incident on the Strip, but rather prevent the emergence of a culture that invites violence on the Strip,” McManus said.

The bill received opposition from some firearms groups, including the National Rifle Association of Nevada and the Nevada Firearms Coalition.

Daniel Reid, the western regional director for the National Rifle Association’s Institute for Legislative Action, wrote in public comment that the bill would do little to deter criminals while putting a burden on legal gun owners.

“Moreover, the restrictions imposed by this legislation are wholly unwarranted. State and federal laws already impose rigorous restrictions on the manufacture, transfer and possession of all types of firearms,” Reid wrote. “The potentially dangerous people convicted of felony offenses, subject to a restraining order or adjudicated mentally defective are already prohibited from possessing firearms.”

Jauregui said that no legislation is perfect, but that the bill would “stop some instances (and) save some lives.”