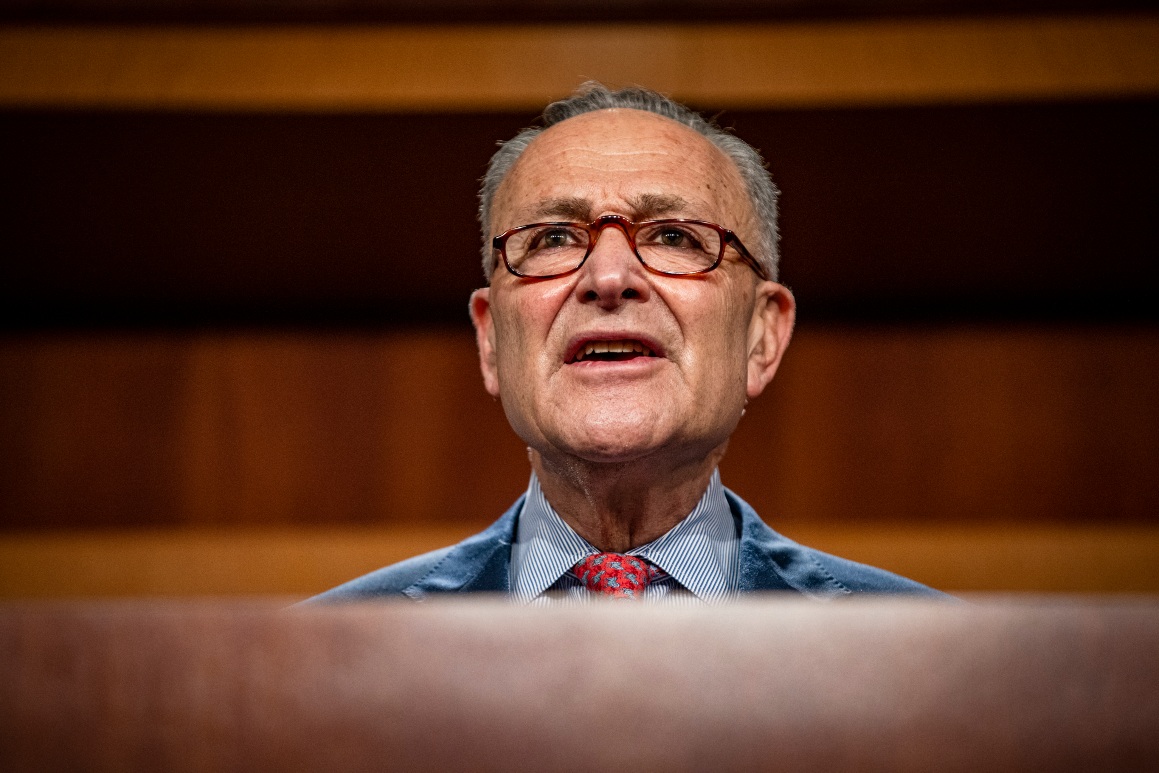 Although Schumer has promised a vote on House-passed background checks legislation, it’s not even clear if Senate Democrats will get their entire caucus on board: West Virginia’s Joe Manchin, the most conservative member in the caucus, said Tuesday he opposes it. Manchin worked with Sen. Pat Toomey (R-Pa.) on legislation to expand background checks to commercial sales that fell short of 60 votes in 2013.

Sen. Susan Collins (R-Maine), one of two Republicans still in office who voted for the Manchin-Toomey proposal, said that she had yet to look at the House bill but that it appears “very broad.”

Toomey agreed, telling reporters that “I don’t think the House has passed anything that can pass the Senate.”

The Pennsylvania Republican, who’s leaving Congress after next year, declined to elaborate on his background checks conversations with other senators. Sen. Chris Murphy (D-Conn.), who partnered with Toomey and Manchin in 2019 on crafting another background checks proposal during the Trump administration, said he is talking to Republicans but that he sees no reason to make major changes to the House-passed bill.

“The Manchin-Toomey compromise was negotiated with the [National Rifle Association]” in 2013, Murphy said, adding that Democrats shouldn’t settle for anything less than universal background checks, which received bipartisan support in the House. “I don’t know that the House is going to live with anything short of expanding background checks.”

While Schumer did not specify when the Senate would consider the House-passed background checks bill, the Judiciary Committee held a hearing Tuesday on solutions to gun violence. Some Senate Republicans have previously suggested they could be open to smaller proposals like so-called red flag laws, which allow authorities to limit a person’s access to guns in the event of an imminent threat to others.

“These aren’t people buying guns at a gun show. These are people that are passing background checks because they don’t have a criminal history until they do,” Rubio said Tuesday, adding that he wants to see the gun debate “focus more on identifying people like this and preventing them from harming themselves or others.”

But several Senate Republicans questioned whether red flag laws provide sufficient due process for the gun buyers affected. And it’s not clear whether a narrower measure on that issue would appease Democrats who have spent years calling for broader change to the nation’s gun laws.

Sen. John Cornyn (R-Texas) suggested that there are “couple of areas” where Democrats and Republicans could make progress. Among them, he said, is his bill with Sen. Chris Coons (D-Del.) that would require federal authorities to notify state and local law enforcement if someone tries to purchase a gun and fails a background check.

Blumenthal, who has yet to reintroduce his red-flag bill with Graham this Congress, suggested that Democrats shouldn’t necessarily take an all-or-nothing approach.

“I think we should aim for a comprehensive set of measures, but we may have to take it piece by piece. And that’s probably what works best this session,” Blumenthal said, advising Democrats to stay open to deals while seeking “as much as we can,” including the ability to impose emergency orders against gun buyers who raise alarms.

In addition to calling for a vote on universal background checks, Schumer took the first steps Tuesday toward potential Senate consideration of a measure from Sen. Mazie Hirono (D-Hawaii) that addresses the rise of hate crimes against Asian Americans amid the coronavirus pandemic. Hirono’s bill would designate a point person at the Department of Justice to expedite review of cases. In addition, the Senate could potentially consider a bill from Senate Majority Whip Dick Durbin (D-Ill.) to combat domestic terrorism and white supremacy.