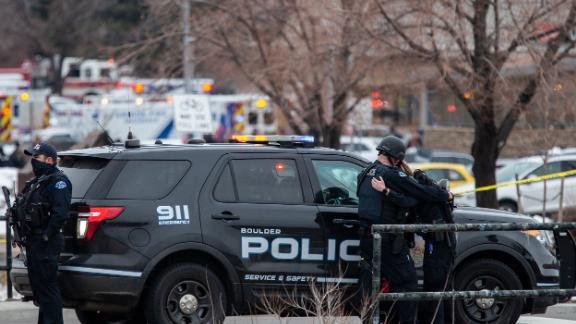 Once again Americans are grieving over lives lost to another mass shooting. On Monday, 10 people, including a police officer, were killed at a Boulder, Colorado, King Soopers grocery store. Just six days ago, we began mourning the deaths of the eight people killed in Atlanta.

Sadly, my family and I are no strangers to this type of tragedy.

Like many young parents, my husband and I chose to move to Newtown, Connecticut, to send our children to Sandy Hook Elementary School. We felt we had found the safest neighborhood in the nation to raise our children but on December 14, 2012, we learned that no neighborhood in America is safe from gun violence. My 20-year-old neighbor shot his mother in his house a few hundred yards from my home, then drove to the elementary school with an AR-15 and high-capacity magazines to kill 26 children and educators in less than five minutes.

Many of us in the community, still in shock, wiped our tears, and quickly mobilized to demand change from our elected leaders. We marched, rallied, testified, met, called and emailed our state legislators to help pass Connecticut’s bipartisan “Act Concerning Gun Violence Prevention and Children’s Safety,” the second strongest gun law in the nation. We also organized charter bus trips to Washington, DC to urge Congress to do the same.

It quickly became heartbreakingly clear to us that the only bill that may have had a chance of passing in Congress was Sen. Joe Manchin and Sen. Pat Toomey’s compromise bipartisan plan expanding background checks and proposing a ban on some semi-automatic weapons. Its title included the words “to protect Second Amendment rights,” an olive branch to the National Rifle Association (NRA) supporters in Congress.

We swallowed hard and made a decision to support the weak background check bill with NRA giveaways. We were incorrectly made to believe it was the only bill that had a chance of passing — we were sold a bill of goods that bipartisan support would get this done.

Sadly, on April 17, 2013, Senate Republicans, led by Minority Leader Mitch McConnell, blocked the bill using the filibuster, an arcane Senate rule that enables senators to block bills favored by a majority of its members. On that dark day, America learned that a policy supported by almost 90% of the American public can be defeated in spite of the majority of senators — 54 — voting in its favor. After the Sandy Hook massacre, 54 votes — not the supermajority of votes that is required to overcome the filibuster — should have been enough.

The year after that shameful vote, Democrats lost their Senate majority and Senate Republicans blocked life-saving gun bills for the following six years. When House Democrats regained majority status in 2018, they passed HR8, Rep. Mike Thompson’s Bipartisan Background Check Act of 2019, and HR 1112, Rep. James Clyburn’s bill to help close the “Charleston loophole.” These votes came after a gun sold without a completed background check was used to kill nine African Americans during a Bible study at the Emanuel African Methodist Episcopal Church. These bills were the only two gun violence prevention measures to pass out of the House that year and they ended up on Senate Majority Leader McConnell’s desk in his “Senate Graveyard.”

Despite former President Donald Trump’s “big lie” that led to the attempted coup on January 6, President Joe Biden, who ran on a strong gun-control platform, is in the White House and has signaled that he is ready to sign gun violence prevention bills into law.

On March 11, the House passed Thompson and Clyburn’s background check bills once again. Sen. Chris Murphy who introduced S.529, the companion bill to Rep. Thompson’s bill, is tasked with passing the bill in the Senate.

Without eliminating the filibuster, this legislation will require 10 Republicans to join 50 Democrats to support the bill, a herculean challenge in so partisan a political environment that 43 Senate Republicans refused to convict Trump for inciting unprecedented insurrection against our nation.

The Brady background check and the assault weapons ban bills were signed into law more than 27 years ago, the last time Congress passed a meaningful gun control bill. With 253+ voter suppression bills in 43 states, Republicans are only interested in regaining power that serves the interest of the corporate gun lobby.

Without ending the Senate filibuster, public safety policies with broad American support will not make it onto President Biden’s desk. That means we can expect more than 100 Americans to keep dying by guns every single day. And that we’re likely to see more of the tragic deaths that we’ve just seen in Atlanta and Boulder.

Correction: An earlier version of this article reported that of all of the Atlanta shooting victims were women. One was a man.